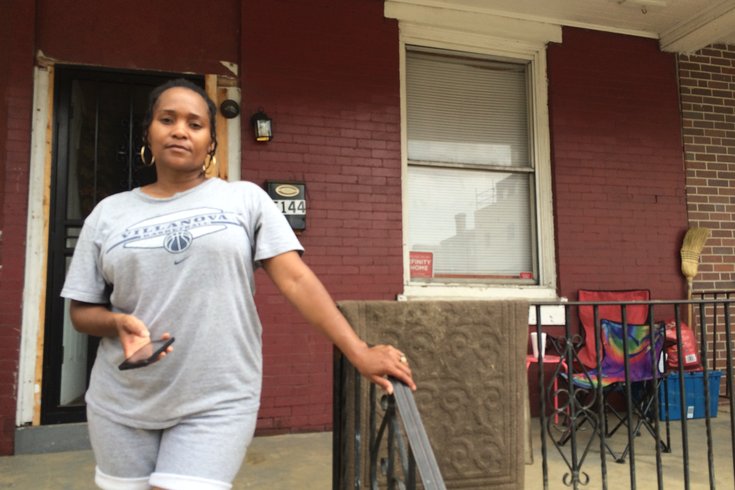 Anita Smith says she lost three family cars and another $12,000 to $20,000 in property when a water main break cause flooded her West Philadelphia neighborhood.

Anita Smith stood outside her home Monday morning on Wyalusing Avenue, sweeping the mud from her sidewalk.

At this point, there was little more she could do.

A 36-inch water main burst on the 500 block of 52nd Street early Sunday morning, forcing thousands of gallons of water into the streets — and homes — of her West Philadelphia neighborhood. Floodwater ascended as high as four feet in some areas, ruining automobiles, soaking basements and forcing evacuations.

“By the time we woke up to see anything, the cars were underwater,” Smith said. “It was just a disaster.”

The water was long gone Monday morning, but myriad problems caused by the flooding remained. Besides the lost cars and water-soaked basements, damaging various possessions, some people still did not have electricity at noon.

Smith, who moved into the neighborhood last July with her husband and son, lost three family cars and an estimated $12,000 to $20,000 in property. She had been storing items in her basement to sell as part of an online store.

Smith said she finalized her online business before going to bed Saturday night. She woke up to see water as high as her front stoop. Her basement was flooded and water was seeping into her living room.

“It was devastating,” Smith said. 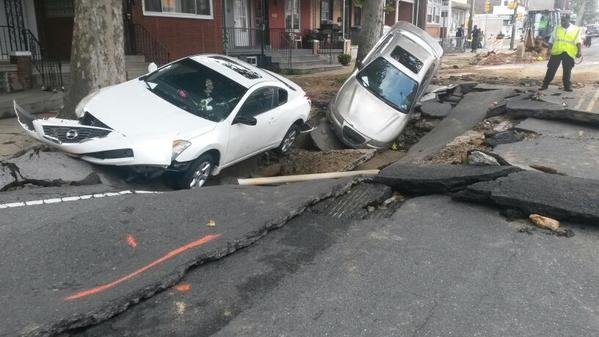 A water main break on 52nd Street left residents with damaged cars and flooded homes on Sunday. This photo, taken by Mayor Michael Nutter, displays some of the damages. (Michael Nutter/Twitter.com)

Residents milled about the neighborhood Monday as Water Department workers tore up 52nd Street to begin repairs on the ruptured main. The pipe originally was installed in the 1800s.

The Water Department has not yet announced the cause of the break. A spokesman did not immediately respond to requests seeking an update on the situation.

Alan Yancy, who lives on Creighton Street with his mother, said residents are trying to remain calm and are determined to figure out how to get to work or school without working automobiles.

“Everybody is trying to come together and help each other out,” Yancy said.

More than a dozen residents reportedly evacuated the neighborhood on Sunday. Yancy and his mother relocated to a nearby hotel, counting on the city to reimburse their expenses. Others, like Smith, stayed put, despite not having any power.

“You can’t just vacate your property,” Smith said. “Then you’ll come back to a vandalized property.”

Residents said they were told a two-week timetable is needed to repair the main and fix damages. But confusion remained regarding what, if any, personal property damages the city will cover. 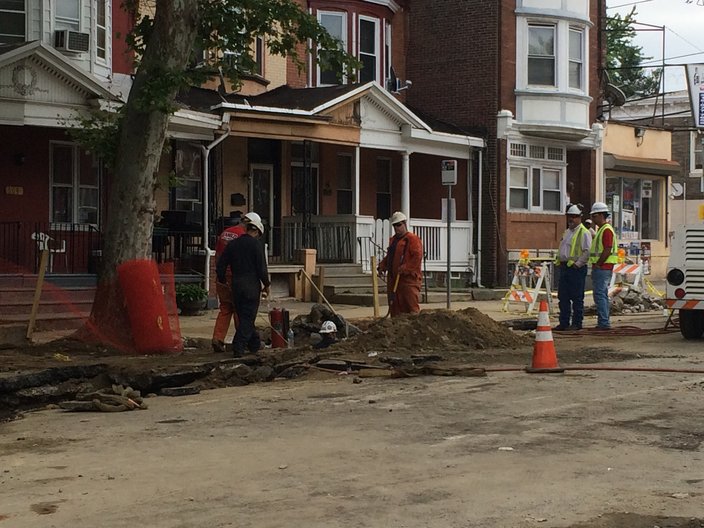 Some residents on Wyalusing Avenue, like Robert Johnson, did not have power Monday morning. Johnson said residents were told their electricity would not be turned on until they had paid an underwriter to certify it was safe to do so.

Johnson, an electrician, said some residents are considering hiring an attorney to fight what he labeled “bulls---.” He said power initially was restored after the Water Department vacuumed the flooded basements, but later was switched off again.

“If this had been the Northeast and a white block, they’d have electricity,” said Johnson, who lost two vehicles and incurred a flooded basement.

Residents said this is the third time a pipe has burst in the neighborhood. This break, they said, was the most destructive.

“It’s the worst,” said Cynthia B., a Creighton Street resident who declined to give her full last name. “The Philadelphia Water Department needs to replace all of these pipes. It’s happening too many times. … The whole basement looks like a tornado hit.”