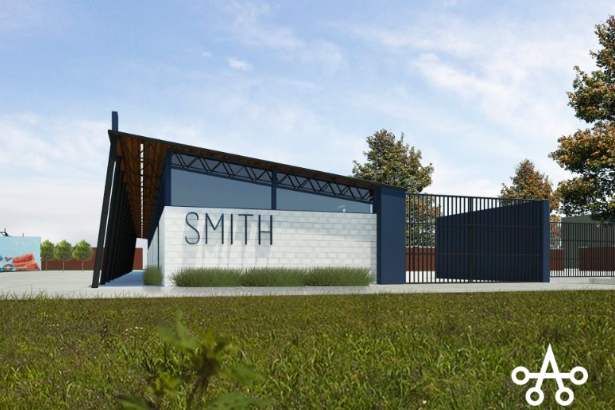 Rendering of revitalized Smith Playground at 24th and Jackson streets.

It's been a disappointing season on the field for Connor Barwin and the Philadelphia Eagles, but the standout linebacker continues to deliver for the community in a big way through his Make the World Better Project.

In June, Barwin's foundation helped raise $300,000 through a benefit concert at Union Transfer, featuring artists such as Mac Demarco and Parquet Courts. The money was intended to fund the revitalization of Smith Playground, a 7.5-acre site in South Philadelphia at 24th and Jackson streets.

After the success of the Ralph Brooks Park revitalization, Barwin's goal was supported by other Philadelphia stakeholders, including Councilman Kenyatta Johnson, Parks and Recreation, the Water Department and Philly Rising.

According to the Passyunk Post, Barwin was joined by several partners Monday for a groundbreaking on the Smith Playground project, which will include basketball courts, a new baseball field, new surfacing on the football field, solar panels, a fitness trail, and a recreation center to provide local classes for the community.

The project, which will be completed in three phases, has a total budget of $3,095,000 and represents the second of three public initiatives led by Barwin's Make the World Better Project. The third project has not yet been determined.

After the groundbreaking, Philadelphia Mayor Michael Nutter tweeted his support for Barwin and called on city residents to support his candidacy for the NFL's Walter Payton Man of the Year Award.

Barwin thanked Nutter and offered fans a chance to win a signed jersey.

Making Philadelphia Better. Thx @Michael_Nutter and all of our partners at Smith Playground! #BarwinWPMOYChallenge https://t.co/nAI0ZxwbJB

Thanks for all your #BarwinWPMOYChallenge support so far! RT for a chance to win an autographed jersey. pic.twitter.com/UUyKStGl4c

The Make the World Better Project has a mission to invest in community, arts and athletic initiatives in collaboration with other foundations, businesses, neighborhood organizations, volunteers and local government.

You can support Barwin's bid for Walter Payton Man of the Year here.