Reward up to $60,000 for info in case of Camden police ambush 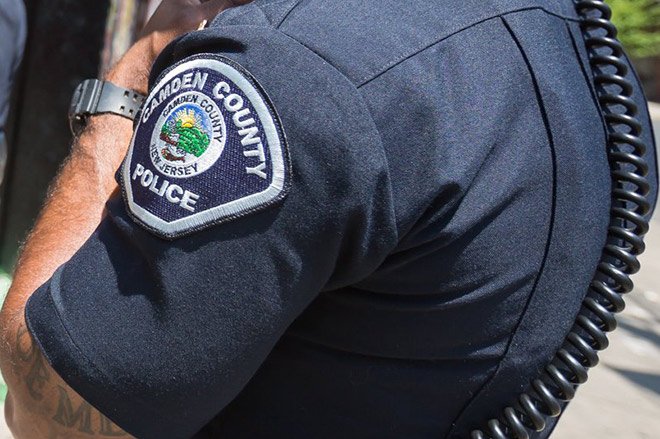 An officer with the Camden County Police Department.

Three days after a gunman ambushed two detectives in Camden, the reward for anyone with information regarding the incident has risen to $60,000.

The Safe Cop program is a congressionally recognized law enforcement initiative of the National Police Defense Foundation (NPDF) that posts up a $10,000 cash reward for public information leading to the arrest and conviction of any person who shoots at a law enforcement officer, anywhere in the United States.

The NJ State Fraternal Order of Police (FOP) has already pledged to provide $30,000, and the New Jersey State PBA is providing $20,000.

Two male suspects started shooting at the plainclothes detectives in their unmarked vehicle about 8:30 p.m. on Tuesday at Broadway and Walnut streets in downtown Camden, authorities said. One of the detectives returned fire.

Camden County Police Chief J. Scott Thomson told reporters on Tuesday night that between 10 and 25 rounds were fired at the detectives.

The detectives, who were not identified by authorities, were taken to Cooper University Hospital for treatment of their wounds. They have been placed on administrative leave pending the investigation.

By state protocol, the Camden County Prosecutor’s Office is conducting the investigation into the incident and Camden County police will not be involved.

Anyone with information about the incident should contact Camden County Prosecutor’s Office Sergeant Vince McCalla at 856-225-8569.