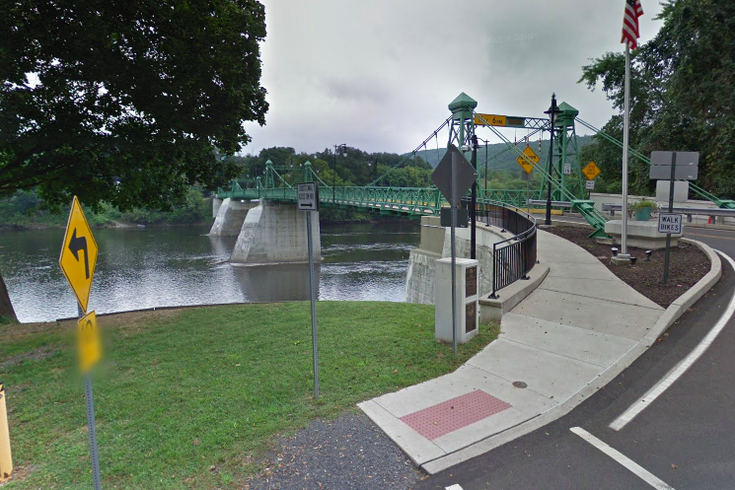 The Riegelsville Bridge in Upper Bucks County crosses the Delaware River into Warren County. A photograph taken by the Delaware River Joint Toll Bridge Commission shows that a small aircraft was flown under the bridge on Sept. 13, 2019.

The pilot of a small plane that flew underneath a Bucks County bridge last Friday may wind up in hot rather than cold water.

A photograph taken at the Riegelsville Bridge, which crosses into Warren County, New Jersey, shows a small white aircraft just feet above the Delaware River. The photo was posted and shared widely on social media over the weekend.

Many questioned whether the stunt was authentic or if the photo may have been doctored.

The Delaware River Joint Toll Bridge Commission, which owns the bridge, put that question to rest on Monday, according to the Bucks County Courier Times.

A commission spokesman said the photo that circulated online came from one of their own cameras.

Officials brought the incident to the attention of Pennsylvania State Police and New Jersey State Police for investigation.

A regional spokesperson for the Federal Aviation Administration reportedly said the maneuver "does not meet any kind of regulation that we would ever support."

The deck of the Riegelsville Bridge is approximately 38 feet above the river, leaving the pilot a very slim margin for error to pull off the stunt.

Many Riegelsville residents who reacted to the photo online were not happy with what they saw. The bridge, built in 1904, has a pedestrian walkway and has undergone extensive repairs in the recent past. While no one was harmed, the outcome could have been a disaster.

An investigation and search for the pilot remains ongoing.