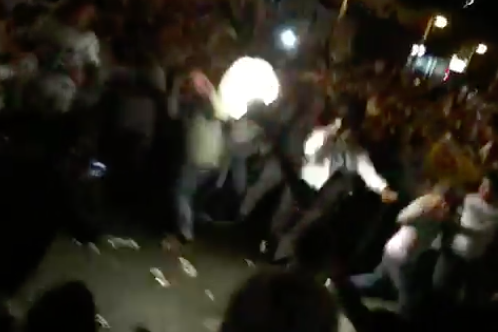 The Penn State Nittany Lions are ranked 24th in the nation after defeating second-ranked (now sixth) Ohio State 24-21 in comeback fashion on Saturday, but State College is reportedly $18,000 in the hole after thousands of students rioted in the streets to celebrate the victory.

Photos and videos of the chaotic scene in Happy Valley surfaced late Saturday night as hordes of students prompted a response from riot police.

Students just broke down the lamp at riot #PennState pic.twitter.com/oVoRjysmN1

Just a few shots I got of tonight's riot—Penn State is wilding over some football I tell ya pic.twitter.com/yx0UKQ4Ot1

Student being arrested at riot after #PennState win pic.twitter.com/mA6nUjqfJP

When you upset the No. 2 team in the country you get to celebrate like this. https://t.co/d9xOkxeG8S

Crowds quickly swelled to between 5,000 and 10,000 people, prompting Penn State Police to plead with rioters to leave the area.

The downtown gathering in State College is unlawful, please leave the area.

The unlawful gathering in downtown State College is being ordered to disperse by police, leave the downtown area.

In at least one documented instance, mounted police used mace against rioters.

Police use mace for second time at riot pic.twitter.com/sSOxrtfcN8

According to the Centre Daily Times, State College manager Tom Fountaine said damages to public property totaled $18,000, including several street lights, utility poles and signs targeted along the 200 block of Beaver Avenue. Several small fires and damage to a vehicle were also reported.

Saturday's riot marks the second at Penn State in the last month after hundreds of students chased after a non-existent clown or two. On Twitter, several students and observers of the riots posted their reactions, some critical and many others downplaying the actions of a few to spoil the overall celebration.

Penn State undergrad app 2017: "Upon acceptance I _____ hereby confirm that I will never riot regardless of any clowns or football games"

penn state riot summary: a street lamp burst into a million pieces and someone lit a bush on fire

Any other team gets a big win, their fans "celebrate."

Penn State gets a big win, our fans "riot."

Penn State students sure do love a good riot lol

The sad thing about the penn state riot is I called this. Before the game even started. "They won't know what to do with themselves."

State College police said several arrests are pending and anyone with information, videos or tips is asked to submit these by phone at 814-231-7150, by email at police@statecollegepa.us, or at the department's website here.