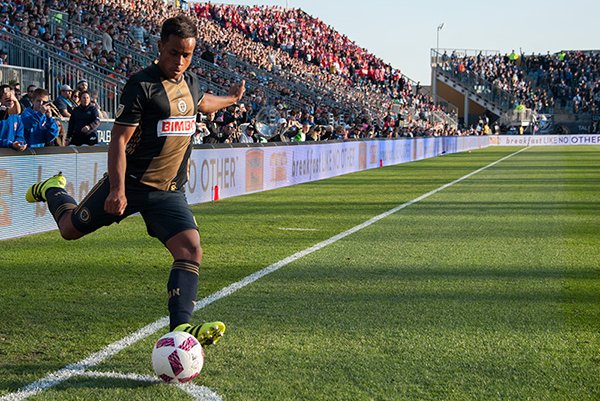 Roland Alberg finished with nine goals for the Union, despite playing less than 1,200 minutes in his first MLS season.

Speaking with reporters for the final time this year, Roland Alberg claimed that he was having a child on December 14th.

The Union forward is back in Holland for the offseason, reflecting on a debut MLS campaign that saw him finish near the top of the Union goal scoring charts, but near the bottom in total minutes played.

Alberg was mostly left on the bench down the stretch when the Union went winless in September and October before flaming out of the playoffs in the wild-card round.

"It was a good season for us, and we had many good games," Alberg said. "In the beginning, of course, it was much better than the end. But I think we put a lot of work together this year. I think we grew, me as a player, and also as a club. Hopefully, we can continue with this next season."

It was an interesting year for Alberg, who was second on the team with nine goals, yet finished 14th overall with just 1,153 logged minutes. He appeared in 28 games but only earned 13 starts and played fewer minutes than Sebastien Le Toux and Ilsinho, one of whom was traded and one of whom was in and out of the lineup with two different injuries.

"Every player wants to play as many minutes in as many games," said Alberg. "But it's the decision of the coach. I have to work hard in every training session and every game. I think I showed them, that when I play, I'm an important player for the Union. Of course, most of the time (that I played), it was as a substitute. But I'm happy with the minutes I got this year and I'm happy to be here. Hopefully next year we'll do better."

Alberg scored the first hat trick at Talen Energy Stadium in a 4-3 win over Chicago in June. It was the first Union hat trick since Le Toux scored three against D.C. United at Lincoln Financial Field back in 2010.

Four of his nine goals came from the penalty spot, but the other five were quality strikes, efforts that showed off the 26-year old's effectiveness in front of the net. Alberg led the Union with a scoring chance percentage of 19.1 and a goals-per-ninety minutes rate of 0.70. He finished with more goals than C.J. Sapong and Tranquillo Barnetta, who each earned more than 2,300 minutes.

The reason for the disparity is likely Alberg's defensive industry or lack thereof. This is a player with natural goal scoring ability who didn't seem to do the dirty running that Jim Curtin desires. The blue-collar, two-way play of guys like Chris Pontius and Fabian Herbers was certainly preferable for the Union manager, who was reluctant to try Alberg in any spot other than the number 10.

That was Barnetta's position, and Alberg either deputized off the bench or filled in during extended absences, such as the departure of Vincent Nogueira that opened up a spot in the starting eleven.

Still, Alberg says he enjoyed his first year in a new setting, despite having to make adjustments.

"It's great," Alberg explained. "We played against some big teams and big players. We showed a lot of good performances this year. For me, I think everything is bigger. How do you say it.. the cities are bigger, you have to travel, you have to fly. In Holland, it's maybe two hours in a bus. So that kind of stinks. It's hard for a player who comes from Europe, but this year, it's, I don't know the word, I have to.. (media interrupts: you have to prepare differently?). Yea, I have to prepare differently. That's the best word for it. But I like it here. We have a good team with good players."

"The biggest adjustment this season was the traveling. Next year I'm ready for everything."