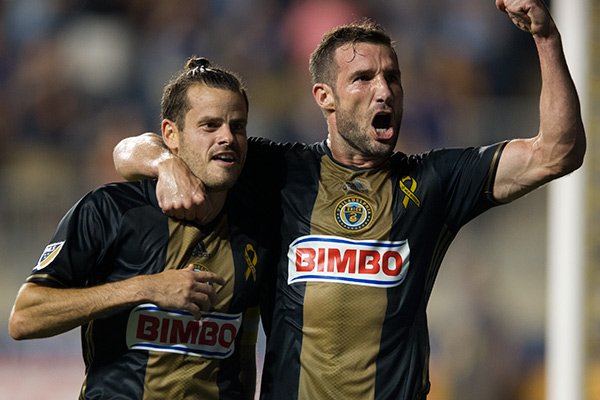 Chris Pontius, right, will return to the Philadelphia Union in 2017.

Earnie Stewart and Jim Curtin held a season-ending press conference on Wednesday afternoon, confirming that the Philadelphia Union did not pick up the options of Taylor Washington, Cole Missimo, and Walter Restrepo.

Matt Jones and Anderson Conceicao, two players on-loan this season, returned to their respective clubs after playing only one game each in 2016.

Additionally, the club will have discussions with Charlie Davies and Leo Fernandes, who are both out of contract.

Two players who will stick around are Chris Pontius and Fabinho, who each individually confirmed their 2017 status. Pontius will enter the final year of his contract and Fabinho returns via a vesting option based on the amount of games he played this season.

Andre Blake also graduated from the Generation Adidas program and will count against the salary cap for the first time if he returns in 2017.

Earnie on Andre Blake: "The stance on that is once people call (about him), then you can talk about it"

Maybe the most interesting part of a very intriguing press conference was the news that Kevin Kratz will return to Atlanta United after expiration of his loan.

The problem is that Kevin Kratz was never on loan from Atlanta in the first place, at least as far wording in the original press release is concerned. The Union claimed to have signed Kratz as a free agent who last played for Sandhausen in the German second division.

This is the Union press release regarding Kevin Kratz, said he was a free agent, nothing about a loan from Atlanta pic.twitter.com/s8oHJpPoop

Later, an Atlanta spokesperson confirmed that Kratz will join Atlanta "pending a binding trade agreement with Philadelphia that cannot be ratified until the trade window opens on December 11th."

What happened is that Stewart misspoke at the presser, since Kratz was technically not on loan. This sounds like a handshake deal between the clubs to get Kratz some training minutes before joining expansion Atlanta during the winter.

The interesting thing is what the Union will get in return. Maybe there will be a bit of allocation money, or an agreement to stay away from Philly players in the upcoming expansion draft.

Not only did we not realize Kevin Kratz was on loan from Atlanta United, we didn't know he was even on the Union. #ATLUTD

We've spoken to a lot of players about the Union's late-season collapse but didn't get much in the way of specifics.

Chris Pontius talked about conceding too many goals and suggested that the Union press was not what it used to be at the beginning of the year.

Otherwise, nobody seems to know what happened, unless they're just being coy.

Here's what Earnie Stewart had to say about the slump -

"I'd say expectations changed during the season. If you could go back in time, it's weird how the brain works. We could have had the exact same season and not done well in the beginning, and finished very strong, then everybody would have been very positive about it. But it works the other way around. I'm happy with how we started. It showed that we have a team that can function well with each other. I guess towards the end of the season, it was shown that we need to play well to score easy goals. When that doesn't happen, the stress on the backline becomes larger.

"At the beginning of the season, we scored a lot of goals. During the season we sure did. We kept playing the same way, which I thought was a compliment to the technical staff and the players themselves. I'd say, at the end, the stress level got there, too. We had a young group, and we spoke about this towards the end of the season, where you never know how people are going to react. It was the first time that a lot of players came into a playoff stretch, or a run to get there. The stress level hits and you never know how people to react to that.

"The good part about it is that everybody has been through it now, so we can only gain from that experience as a young group, and with the foundation that we have now to better in the future."

Earnie on idea of changing formation during the season "I don't believe in that."

Regression to the norm?

One of the running theories is that the Union weren't all that great, and simply punched above their weight at the beginning of the season. Was the slump simply a product of an overachieving team falling back to the median?

I asked Pontius if that was a fair assessment of the season.

"I wouldn't look at it that way," the midfielder said. "You can have seasons, or points in a season where balls just seem to fall your way, and there's nothing that you can put your finger on. Certainly, in the beginning of the year, certain calls went our way, the ball fell our way, and at the end of the season, I think everything kind of went against us.