TORONTO – In retrospect, the disappointment for Union fans should not be the result of this game, but rather how it was lost.

This wasn't supposed to be a one-goal game by the 80th minute of play, and the fact that the Union were able to stay afloat in the second half, and even push for the equalizer, revealed that maybe there was a little bit left in the tank after all.

The difference, again, was not the conceding of goals, but the conceding of preventable goals. For as much as we talked about the struggle to score, and the lack of game-changing talent on this team, the 2016 Philadelphia Union will be remembered as a club that repeatedly shot itself in the foot with lackluster defending.

Let's go through the goals, then.

The first one was obviously the result of a shanked Ken Tribbett clearance and a moment of hesitation and/or indecision from Andre Blake.

One fan correctly pointed out the following:

@Kevin_Kinkead I think Blake's decision making has been impacted by lack of trust in his CBs. Understandable.

I'm absolutely sure that Blake's decision making has been impacted by the defensive frailties down the stretch. I don't think he was close to reaching that ball, and even though he got up well enough to try to swat it away, it was a low-percentage play to begin with.

In this screenshot, the ball is still bouncing a bit, but Altidore is on top of it while Blake is still a few yards away. 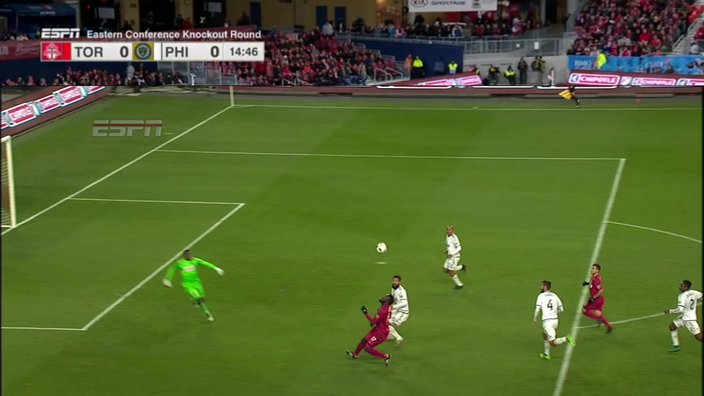 Either way, Fabinho could have helped out a bit here by turning and looking to locate Sebastian Giovinco. In the end, give Altidore credit for putting that ball into a dangerous spot and getting the assist on the opener.


As far as the second goal, this one was the probably the toughest to concede, just for the fact that Philly didn't seem to improve at all in dead ball situations this year.

This one finished with two wide open Toronto players in front of the net.

Take a look at the replay first and see what you can identify:

When you freeze it, the Union actually have this drawn up really well.

They've got Warren Creavalle and Fabinho on the posts. Tranquillo Barnetta is free at the six yard box to clear short service.

There's a 5v5 inside the box, and Ken Tribbett is on Drew Moor, Richie Marquez is on Nick Hagglund, Keegan Rosenberry is on Jonathan Osorio, C.J. Sapong is on Jozy Altidore, and Chris Pontius is on Eriq Zavaleta. 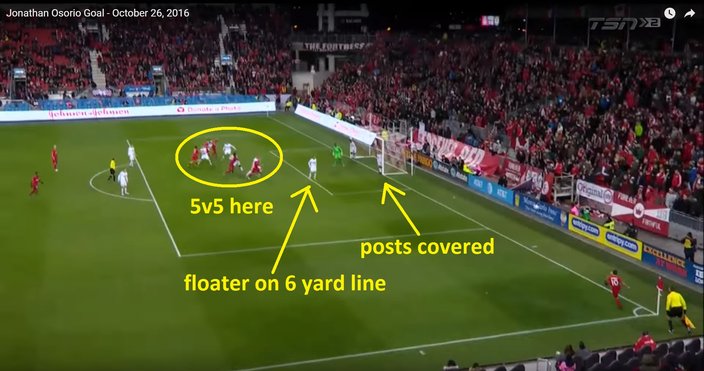 What happens next is somewhat goofy, with Hagglund and Altidore both moving to attack the ball. Hagglund actually pushes Altidore from behind and the ball bounces free in the box for Osorio to fire home.


The biggest issue here is that Rosenberry completely leaves his mark and decides to ball-watch instead, which is not something you would expect to see from him.

Richie Marquez is closest to the ball, but he's coming in with Hagglund and can't really make a play with Jozy in the way. Tribbett also leaves his mark wide open on the back post as well.

It's alright to leave your mark and attack the ball, but you better make sure you get there. If you don't, then your mark is obviously going to be wide open. This time, it fell to Rosenberry's man and not Tribbett's, but both vacated their defensive responsibilities. 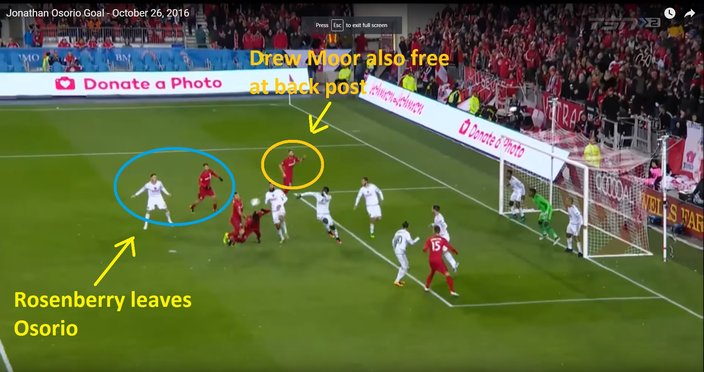 As for the third goal, there's really not much to talk about there.


Maybe there was a bit of a foul on Creavalle to start the play, but it then develops into Giovinco going one versus three against the Union defense. When the ball is clipped back to Altidore, Tribbett makes a meal of it and Philly concedes again.

One of the things that made Philly successful in Toronto a few weeks ago was the ability to clog the middle of the park and limit Michael Bradley's influence, at least for the first 60 or 70 minutes.

Toronto was in a 4-4-2 during that game, but this time around they stayed with the 3-5-2 which had been experimented with in the second part of the season.

Here's how they lined up: 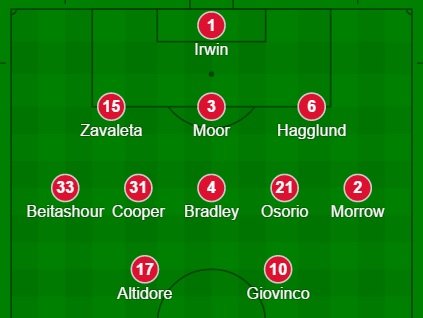 It's a smart way to get around a defensive 4-4-2 and try to get the ball up the flanks instead.


With safe outlets to the left and right, Philly wasn't able to press consistently in more advanced positions. Even though they tackled well (17 for 24), there were only three 50/50 tackle attempts in Toronto's half of the field, with two successful efforts taking place just inside the midfield line.

Beyond that, Philly also committed 10 fouls inside the Toronto half of the field, and pulled off two interceptions in the attacking third. Those numbers were much better at the beginning of the season when the Union were able to get higher up the field and force turnovers in dangerous areas. For whatever reason, they just couldn't replicate that down the stretch.

Do you remember the play where C.J. Sapong picked up a yellow card for a foul on Michael Bradley?

That was the product of Toronto circumventing the press. 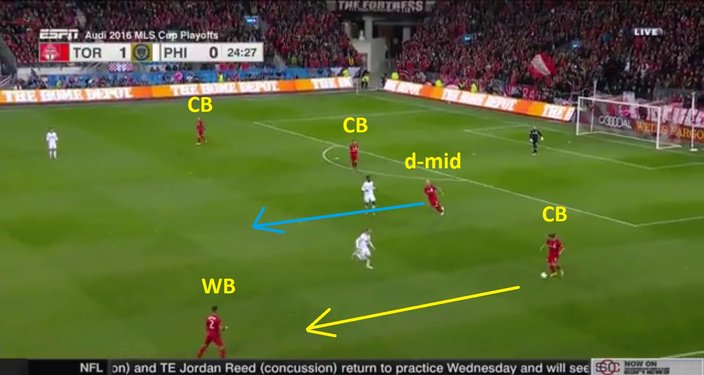 In this play, you have your three center backs spread across the back, with your right wingback, Steven Beitashour, completely out of the picture. The left wingback, Justin Morrow, comes to the touchline to provide an easy outlet for the left center back. Michael Bradley, the defensive midfielder, sinks in to provide another passing option and fourth body on the backline.


When the play proceeds, Bradley moves forward into that space. You can see him moving in that direction already, even in a still photo. Toronto is able to play a simple triangle around Sapong and Barnetta and draw a foul going forward.

The 3-5-2 is a great shape, and I wish more teams would try it. You need a lot of defensive discipline to pull it off, plus wingbacks who really understand their roles.

He started well with some really nice holdup play, then the key pass to Pontius for the shot that was blocked inside the box. He also got a foul call or two that he really wasn't getting down the stretch of the regular season.

Then, the usual happened. He became isolated up top, didn't get much service, and started to fade from the game. There was a brief spell when he moved out to the wing and had more room to operate, but he finished the game with just one shot on goal, which was a close-range deflected header.

He did some good defensive work early, highlighted by a sequence where tracked back nicely to strip Altidore of the ball.

Offensively, he just never really got going, and was removed in the second half.

For the first 30 minutes of the game, this was the Barnetta that we saw at the beginning of the year.

He was demanding the ball, running at defenders, drawing fouls, and moving his team forward.

Later, when the calls weren't going his way, you could sense a bit of frustration, and he started conceding free kicks of his own.

A bright start for Barnetta in his final Union game, but just not enough to impact the game like the other guys on the other team.

Three blocked shots and one hopeful effort from outside the box.

By his own admission, he was “opportunistic” on the goal, and really just found himself in the right place at the right time.

Otherwise, it was another underwhelming performance from Bedoya, who missed badly on some early tackle attempts and conceded an unnecessary hard foul on Giovinco in a dangerous spot, right before halftime.

Bedoya's passing also left something to be desired. I'm 100% convinced that he needs an offseason and some time to adjust to a new league, just like Tim Cahill, Andrew Pirlo, Marco Di Vaio, and other designated players who have arrived as midseason transfers.

A really gritty and gutsy performance from a guy who played with three broken ribs.

Was he lucky not to be called for a penalty around 14th minute?

Fabinho looked a little hesitant early in this game, with a couple of jumpy defensive moments. He improved as the game went on in that department.

Offensively, he put three of four cross attempts into the box, but none of those found the head of a teammate.

He got a secondary assist on Bedoya's goal with a smart knockdown to the opposite post.

Defensively, I didn't think he was culpable for any of the goals the Union conceded. We talked about the set piece above, where his man collides with a teammate. It's a tough spot for Marquez, who has Jozy Altidore moving backwards into his mark.

Not much to say about Tribbett, who again struggled in some big moments.

Tribbett has played some decent games this year, but the penchant for mistakes is going to keep him on the bench next year if the Union improve their CB depth.

The early scoring chance for Giovinco was dangerous, but Rosenberry did well enough to push him inside and force a shot from 18 yards out.

He finally got forward to try a cross around 34 minutes in, but overcooked the effort.

Later, in the second half, he had an incredibly poor turnover that lead to another scoring chance for Altidore.

Again, not much offensive influence from Rosenberry, who just seemed like he could have used a rest at some point this season. The ball-watching on the second goal was a disappointing way to finish an otherwise excellent rookie year.

Blake looked human in what will probably be his final Union game.

An instant spark off the bench, you wonder where this team might be if he could have stayed healthy in 2016.

Yea, there were some calls that seemed iffy, and maybe there was a foul or two here and there that didn't get called, but this is the playoffs.

Considering the fact that he didn't alter the game with any mind-blowing mistakes, I'd say it was a successful night for Toledo.