It's time for the Philadelphia Union to sell their best player 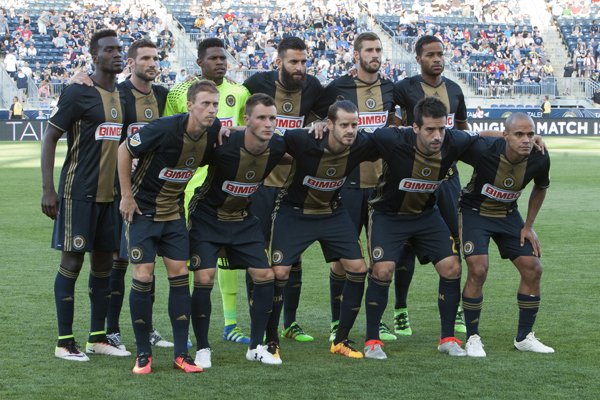 It's time for the Union to turn a profit on their most valuable transfer prospect.

With Monday night bringing news of Andre Blake's graduation from the Generation Adidas program, the most obvious move of the offseason became much clearer.

The Union need to sell their best player.

The graduation means that Philadelphia's standout, all-star, Jamaican international goalkeeper will lose the exemptions he was granted as a top member of the 2014 rookie class. That means he will hit against the salary cap for the first time in three years, and he also will require protection in the upcoming expansion draft.

Philly is looking at a cap hit in the $140,000 to $200,000 range, should Blake stick around for 2017. David Bingham and Zac MacMath, both goalkeeping peers (and one a former teammate), each earned $140k this season as recent GA graduates. Field players Walker Zimmerman, Andrew Farrell, and Kekuta Manneh made $170k, $150k, and $127k, respectively.

That in itself is hard to stomach – how do you pay for something that once was free? It's like ponying up for HBO after a free year of Boardwalk Empire.

Of course, spending money for Blake isn't the worst thing in the world. You would, after all, hang on to your all-star goalkeeper, a guy who singlehandedly changed a number of games this season with world class, mind-bending saves. He wasn't the same player after the all-star break, but I think the Union defense began to falter and Blake started to lose trust in the four guys playing in front of him.

@Kevin_Kinkead FWIW Blake snapchatted himself moving out his place yesterday.

Where would he go?

Sources told PhillyVoice last month that Blake was close to being sold in 2015. A deal had been lined up with a Belgian club, either Genk or Gent, but that didn't happen for some reason. Blake was injured at the beginning of that season, and that could have been the reason the transfer fell through. Gent would have been a good destination for Blake, as they were preparing for a Champion's League campaign as winners of their domestic league.

Global Premier Management, an agency that works with MLS players, later confirmed the interest from Belgium but said that no transfer talks ever took place.

KAA Gent invited Blake last season for training. Union refused to allow it. They are no longer interested. https://t.co/scwVwnV4Vn

The MLS Transfers twitter account also reported that Blake has an offseason trial lined up in the Netherlands, which would make sense considering the Dutch connections of Union Sporting Director Earnie Stewart.

Any European destination would be ideal for Blake, but starting in Belgium, the Netherlands, France, or even Scandinavia might provide a good first step for the 25-year old.

How much money can the Union make?

I keep seeing hopeful numbers being thrown around, but I seriously doubt that Blake will demand that much of a transfer fee. Five million dollars for a MLS goalkeeper is not realistic. Four million is not realistic.

If Earnie Stewart gets more than two or three million dollars for Andre Blake, then he deserves a cut of the transfer fee and a promotion.

Think about some of the recent external sales that MLS has completed.

Matt Miazga went to Chelsea for around five million dollars. Giancarlo Gonzalez was sold to Palermo for around four million. Tim Ream went to Bolton for about 3.5 million and Krisztian Nemeth only garnered three million from Qatar.

The precedent for a high transfer fee just isn't there.

But even if the Union can sell for Blake for three million, they're still in great shape. MLS would start by taking one-third of that amount (per single entity rules), leaving the Union with two million to spend.

You can do a variety of things with that money. You can bring in a DP striker. Maybe you can upgrade at center back and/or defensive midfield. Any leftover slush could go into further improving the new facilities or continuing to add to the infrastructure down in Chester.

If you can get that kind of money, for a player that you paid zero dollars to acquire, then you have to do the deal, right?

So who plays goalkeeper next year?

They'll find somebody. Goalkeeper is the one quality position that we consistently produce in North America, so the Union don't need to search far and wide for a replacement.

Looking down the Union roster, you've got local product John McCarthy, who enters his third year with the club. Matt Jones is set to return to Portugal following the expiration of his one-year loan. The best academy product is Andrew Verdi, an 18- year-old Ivyland native who is currently in his first year at the University of Michigan.

McCarthy and Jones each started one game this season. McCarthy was in goal for the 3-0 loss in Chicago. Jones played the 3-2 home win against Columbus.

For what it's worth, McCarthy did play a number of games for Bethlehem Steel this season, but there wasn't enough top-level play from either guy to really make a judgment on their 2016 seasons.

Personally, I did find the preference for McCarthy a bit strange. Matt Jones was often left out of the game day 18, and only backed up Blake a handful of times. McCarthy is a decent backup and a good story, but I can't believe that he's better than a guy who played more than 80 games in the Portuguese top flight, which included games against Porto, Braga, Sporting, and Benfica.

Jones was on $75k this season and McCarthy earned $79k base, so salary isn't an issue there.

If you don't go with one of those guys, there are plenty of other players who can do the job. They probably won't make the spectacular saves that Blake made, but that won't matter if you sign a legit goal scorer or patch up your shaky defense.

What a save by Andre Blake. pic.twitter.com/ei4M4EuxBr

What could have been

The real crime here is that Blake had to endure two years of crap before earning the starting job.

What team trades up in the draft to select a goalkeeper No. 1 overall, then sits him on the bench?

Blake didn't get a regular season game until August of 2014, and that was his only appearance of the season, outside of two games against non-MLS squads in the early rounds of the U.S. Open Cup.

The Union then went ahead and bought Rais Mbolhi, further relegating Blake down the depth chart. An understandably upset Zac MacMath was eventually loaned out, Mbolhi left, Blake got injured, and the Union deservedly endured a goalkeeping circus that required an emergency loan to get Brian Sylvestre on the field.

The farce continued through 2015, and even then Curtin wouldn't hand the keys over to Blake. Only at the very end of that campaign did Blake fully claim the starting GK job, which now seems ridiculous in hindsight.

That's the reality of Blake's tenure in Philadelphia. Most of the disappointment was self-inflicted.

If he stays, then great. The Union will have an incredibly talented goalkeeper for 2017.

If he leaves, you turn a profit and spend the money elsewhere.

If you want something to be mad about, be mad at John Hackworth for drafting Blake, then sitting him on the bench. Be mad at Nick Sakiewicz for signing Rais Mbolhi. Be mad at Jim Curtin for waffling between Blake and McCarthy in 2015.