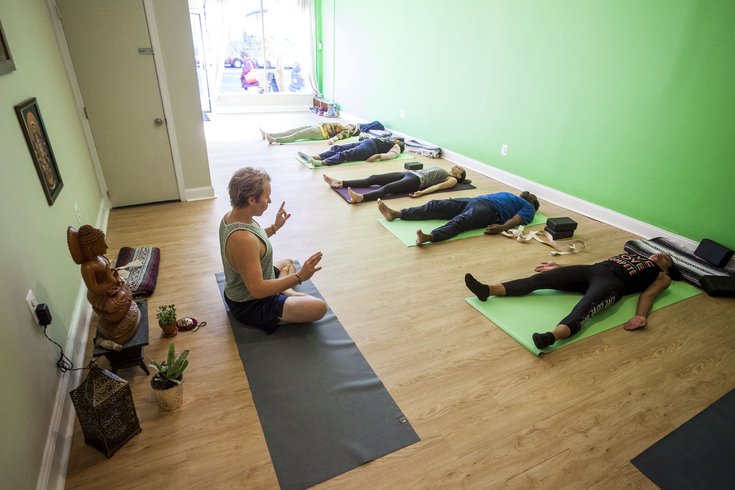 Class is ended with the calming Shavasana pose.

Inside the cucumber-green studio of Roots Yoga, a cast of yoga students -- many of them homeless -- rise to their feet and balance on one foot, with at least one starting to tilt and ease into a tip-over.

Attentive, instructor Erik Burling takes notice and ushers in what appears to be the theme of this afternoon's session.

"Even if you fall," he says, as smoothly as you'd imagine a yoga instructor saying so, "can you fall in the right direction?"

It's not so much posed as a literal request, but rather, inserted as a thought for later mulling. Bernise, the woman nearing a fall, responds with an ear-to-ear grin and continues on with her pose. She doesn't fall.

Roots Yoga Studio opened in July at Ninth and Spring Garden streets as a destination for the neighborhood and, more intriguingly, a welcoming spot for the city's homeless and recovering addicts. Twice a month, the studio offers a free hour-long yoga class, typically headed by Burling or his wife, Lauren.

Erik told PhillyVoice that, in general, he and his wife knew they "didn't want to just open up another yoga studio." Scanning the Callowhill neighborhood, they drafted two main goals: help bring a sense of community to the neighborhood, and lift up the area's homeless population.

"Roots' 'Philly Yoga Project’ is born from the idea that a group of people practicing yoga together could be instrumental in the shaping of a neighborhood," he explained. "So, we moved into the neighborhood and saw there’s a shelter right there, another shelter right here, and if you’re looking truthfully at the demographics of this neighborhood, you can’t help but see the need – there are a lot of homeless or transient people around, constantly walking by."

"It’s sort of seeing that, ‘Well, there’s these people here and how can we be of service to them?’ We teach yoga, so we can offer them free yoga," he added. 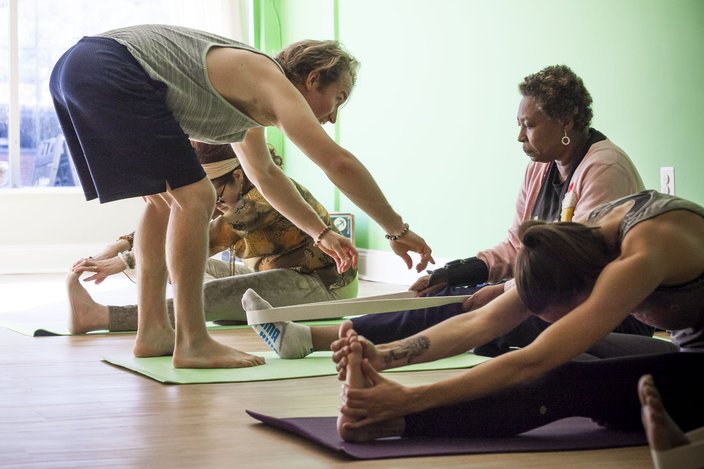 Erik previously worked as program coordinator for homeless service organization the Bethesda Project, where he also taught yoga classes to the homeless. Lauren is a social worker who had frequent interactions with homeless patients while working at Hahnemann Hospital. Their combined experience, he said, seemed to make sense.

Meanwhile, it's not lost on either of them that yoga alone can't fix the nuanced problems of the homeless.

"I'm not touting yoga as a lifesaver, a miracle-worker or anything like that," he said. "The idea is to have people come in here, get away from that grind of getting out of homelessness and get away from all their addiction meetings – we’re not an AA meeting; we’re a break from that. We want to give them an opportunity to rest, relax, breathe and get some physical exercise so when they get back to their daily grind of making their way back to balance, this might help a little bit.”

And it does help.

"The sky is the limit with yoga, and it helps me process things -- to stay stable," explained Russell Tillman, a homeless man with Our Brother's Place who attended Burling's yoga class.

Tillman told PhillyVoice he practiced yoga every day in his cell while incarcerated. Released from a long-term prison sentence just four months ago, he's been transitioning into his new life and cites yoga as a helpful way for him to stay focused on moving forward and getting through the day-to-day.

"And the breath is so important to me, too," he added. "Just to recognize that. It's something I celebrate every day." 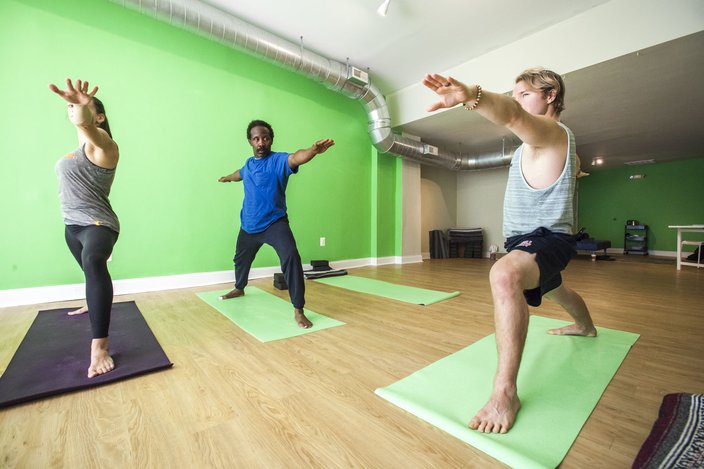 For the Burlings, yoga is a way of life. Giving back is second nature to who they are.

"We really do believe in yoga," Erik said. "It’s something my wife and I live every day. It’s helped us in our lives, and we know it can help these people in their lives, too. Our focus is on giving out – giving, giving, giving. Down the road, I’m not attached to it, but if we were able to make this into a nonprofit, that would be terrific."

For now, Roots Yoga is partnering with nonprofits like Project HOME, Gaudenzia and the Bethesda Project to spread the word. The husband-and-wife duo hopes to rope in more local shelters and programs to collaborate with, as well as bring in people like Tillman, who could use the positive reinforcement.

"I'm continuing to fall in the right direction," Tillman said, coming out of his workout looking refreshed and confident. "That's my responsibility."