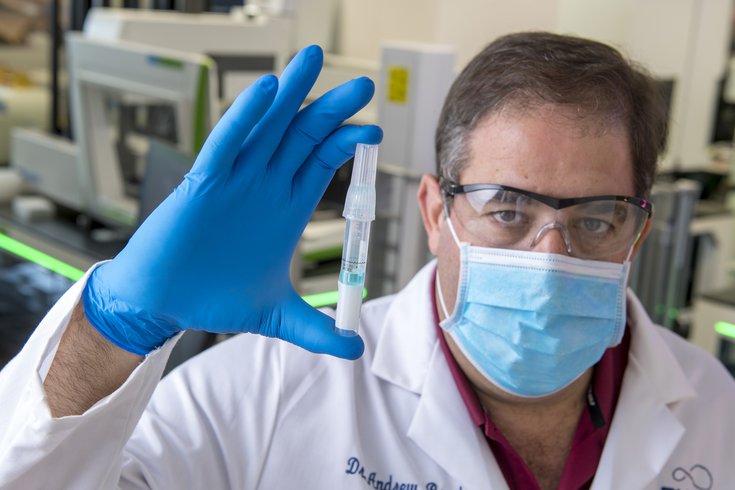 Andrew Brooks, the Rutgers professor who led the development of the first saliva-based COVID-19 test, died at 51, the university said this week.

A Rutgers research professor who helped develop a coronavirus test that could detect the presence of the virus using a sample of a person's saliva died unexpectedly Saturday.

Andrew Brooks led the development of the first at-home, saliva-based COVID-19 test to receive emergency approval from the U.S. Food and Drug Administration last spring. More than 4 million of these rapid response tests have been performed since March.

The university did not disclose the cause of professor Andrew Brooks' death. He was 51.

"We at Rutgers offer our heartfelt condolences to his family, including his three children, and with them we take pride in his achievements that will have lasting impact," said Rutgers-New Brunswick Chancellor Christopher J. Malloy, Chancellor Brian Strom and Vice President of Research S. David Kimball, in a joint statement.

Gov. Phil Murphy called Brooks "one of our state's unsung heroes," and the test "undoubtedly saved lives," during his press briefing Monday.

"We cannot thank Andy enough for all he did across his career," Murphy said. "He will be sorely missed by many."

The Rutgers community is saddened by the unexpected passing of Andrew Brooks, a research professor who led the creation...

These saliva tests offered a way to detect COVID-19 using an at-home test delivered directly to the doorsteps of patients, providing an alternative to form of testing to those that collect samples using nasal swabs. Rutgers developed the test alongside Spectrum Solutions and Accurate Diagnostic Labs.

The tests are available for at-home delivery through online food and convenience store delivery app, goPuff.

Brooks served as a research professor in Rutgers-New Brunswick's School of Arts and Sciences in the Department of Genetics. He received his Ph.D. in neuroscience from the University of Rochester and later became its director of Medical Center Core Facilities.

He came back to New Jersey four years later to direct the joint Rutgers/UMDNJ EOHSI Bionomics Research and Technology Center. As the chief operating officer and director of technology development at RUCDR Infinite Biologics, he led the COVID-19 saliva test development.

"Andy and I were close. We often commented that I was old enough to be his father, and I often thought of him as a son. He will be fondly remembered by the large cohort of scientists whose research he facilitated across many years," Jay Tischfield, Rutgers-New Brunswick professor of genetics and executive director of the Human Genetics Institute of New Jersey said.

Brooks served as an adviser to the FDA for 17 years as the director of the Harlan GeneScreen Laboratory, now called Envigo, and has co-authored more than 70 publications.

Brooks was born and raised in New Jersey and is survived by his wife Jill, three daughters Lauren, Hannah and Danielle, his mother Phyllis Brooks and sister Janet Green.