Ryan Howard opens up on being profiled by Philadelphia police: 'It's got to change'

The incident occurred shortly after his MVP season 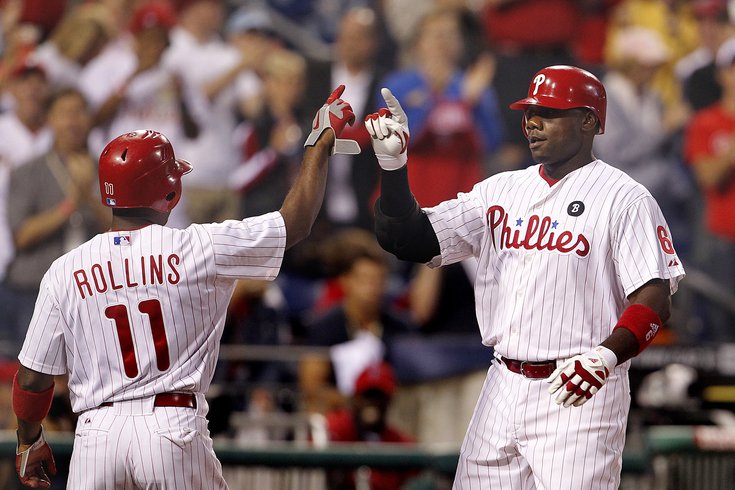 Former Phillies' stars Jimmy Rollins and Ryan Howard participated in a roundtable about race this week.

During the Phillies' run of success from 2007-2011, the sight of Ryan Howard anywhere in Philadelphia should have been (and often was) a cause for celebration. Affectionately nicknamed "The Big Piece," the midwest native provided pop in the middle of Philly's order and helped lead the team that broke the city's long and frustrating championship drought in 2008.

But as America continues to process the death of George Floyd and years of state violence against black Americans, Howard has a reminder that who you are and what you do doesn't matter in the face of racism.

Participating in a conversation about Floyd's death with five other former MLB players — teammate Jimmy Rollins, former Phillies outfielder Doug Glanville, Dontrelle Willis, Torii Hunter, and LaTroy Hawkins — Howard opened up to The Athletic about an incident that took place as his team began to ascend. It's an enlightening, engaging conversation that you can either read or watch on video, but it is worth your time in either format, as the group of men cycle through dialogue on police brutality, George Floyd, protests, their relationship with law enforcement, and so much more.

Howard, who was soft-spoken for much of his time in Phillies pinstripes, offered plenty of insight on his experiences growing up black in America. And though he couldn't place the exact time, Howard says he was profiled by police after returning late from a road trip sometime in 2007 or 2008:

When the police pull up behind you, you’re like, “Oh man, do I have all my stuff in order? Is my registration up to par? Do I even have it? Wait, let me make sure I get my wallet out so it’s not in a place where I have to ruffle to give this dude cause.”

It goes back to the whole white privilege thing, to where they cannot understand what it’s like to have to be in that situation. I actually had a situation in Philadelphia back in ’07, ’08. We had just gotten home from a road trip. It was like 3 or 4 in the morning. We’re leaving the park. I live downtown. I’m in my Escalade. I’ve got the big rims on it, 26-inch rims, windows tinted.

Everybody knows what the police-car lights look like. I’m like, “OK, let me act right because this cop is right behind me. I’m going to try and let this dude pass. We pull up to the same light. He pulls up next to me. I’m going left. He’s going right. The light turns green, boom, my signal is on, I’m doing everything proper. I make my left turn. He sits there at the light. Two seconds later, boom, he makes the left and follows me. Pulls me over and asks for a license, registration, the whole nine yards.

I said, “Officer, can you tell me what I was doing?” He said, “Well, I ran your plates and nothing came back.” I was like, “Isn’t that a good thing? I didn’t speed, didn’t run any lights. I wasn’t doing anything crazy, but you felt the need to pull me over.” Then another police officer pulled up, a black police officer. He went over to the dude and said, “You know who that is?” He came over and talked to me, the dude wound up leaving.

I said, “Look, man, if I’m breaking a law, I don’t care who I am, what I do, that don’t matter. If I’m running a light or not signaling and you pull me over, that’s fine. But when he tells me he pulled me over because he ran my tag and nothing came back what am I supposed to do?” The black officer said, “Yeah, that dude has done that a few times.” He ended up getting reprimanded by his superiors. But when you have people like that working in that capacity, what can you do? [The Athletic]

Howard's story, balanced against an uncountable number of stories from around the country, is only unique in that it comes from someone with prominence and a voice in the Philadelphia sports community. Even within the six-man group of players who sat down for the discussion, each had their own stories of how they were impacted by profiling, including Glanville, who says he joined the police council where he works in Connecticut after an incident with a West Hartford police officer in his driveway.

Though they share so much in common, it's instructive that their shared experiences come from lives that began in so many different places. Howard's a Missouri native, Rollins and Willis are from Oakland, Hawkins is from Gary, Indiana, Hunter grew up in Arkansas, and Glanville is a New Jersey native with an Ivy League education from Penn. All have stories to tell about their own frustrations and fears with police.

That includes Rollins, who served in the leadoff spot (perhaps to the chagrin of some misinformed Phillies fans) and explained the struggle of working through these everyday fears while in the clubhouse.

Obviously, our white counterparts, they have a completely different view. They don’t have to grow up having that talk — and we all know what that talk is. They don’t have to get in a car, drive down the street knowing I didn’t do anything wrong, but this cop has been behind me for two blocks, something’s about to happen. They don’t have those fears. And every time something like this happens, as a player, you know exactly what is going on. When you get in the clubhouse, you do look at your counterparts, they’re going about their day as if nothing happened. And you’ve got three or four guys in the clubhouse looking at each other like, “Man. You see that? You know what that’s about. What can we do?” Then it’s four versus 21. It makes you a little uncomfortable.

Now that I’m done, I wouldn’t say I don’t care as much about others’ opinions. But I really don’t. It is what it is. I don’t have to walk into a clubhouse. I can go ahead and say my piece. As you become older, you become more mature in your thoughts, you find ways to express yourself. You see the world slightly different. You’re no longer in that bubble of sports and being in protection mode. You stand up for yourself a lot more in those situations than you did when you were playing.

As a player, you’re always trying to keep that clubhouse even-keeled and focused on the game. But there are plenty of times you’re going out there with something else on your mind. And having a couple of guys on the team is always good, so you can bounce that off them so you don’t have to let it explode throughout the clubhouse if somebody does something that rubs you the wrong way. [The Athletic]

As Rollins goes on to explain later in the conversation, that focus on keeping things even-keeled or doing it "the right way" is a constantly sliding scale. Invoking the names of Martin Luther King Jr. and Malcolm X, who had different views on the best way forward, Rollins made sure to point out both men were assassinated at the end of it all (and that's without mentioning other black luminaries of the time period like Fred Hampton, prominent figure in the Black Panthers, who was killed by FBI agents in his own home).

What's sad is that it takes stories from people like Howard or Rollins for conversations like these to be elevated and taken seriously in the first place. Floyd's death has been the catalyst for a nationwide movement, but it is not even the first time in recent memory that a black American was on camera telling a police officer they could not breathe in the moments before their death. The problem becomes crystal clear when "I Can't Breathe" can be recycled as a rallying cry six years after Eric Garner's death.

The only positive here is that more honest conversations about these topics are being had in the wake of Floyd's death. If only we could get there without so many people needing death and tragedy for motivation.