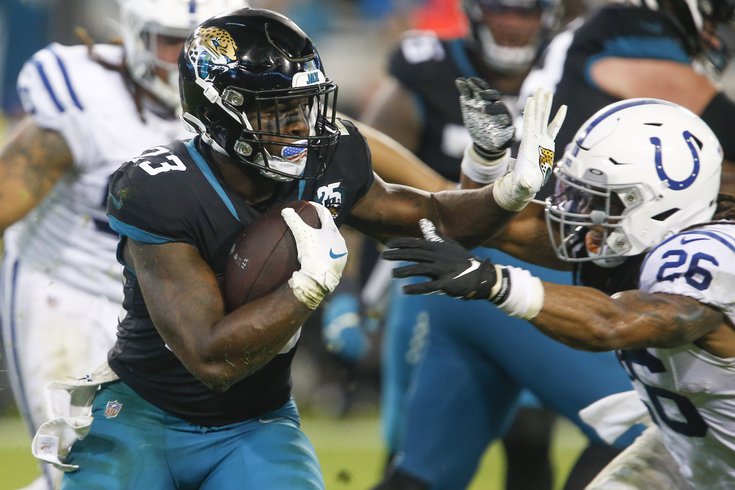 Ryquell Armsead, 23, has been hospitalized twice with COVID-19 and will likely not return to the Jacksonville Jaguars for the rest of the 2020 NFL season.

Jacksonville Jaguars running back Ryquell Armstead is expected to miss the remainder of the 2020 NFL season as he recovers from a serious case of COVID-19, according to reports.

Armstead, a product of Temple University, has been placed on the Jaguars' reserve/COVID-19 list twice this season. The second time came in early September, when it was hoped Amstead would be able to make a return to the field.

But Armstead reportedly has been hospitalized twice in the past few months after suffering from a variety of complications from the virus, including significant respiratory issues, according to ESPN.

The 23-year-old back was expected to have a large role in the Jaguars' offense after the team cut former first-round pick Leonard Fournette. In Armstead's absence, the Jaguars have turned to rookie undrafted free agent James Robinson, who has totaled an impressive 481 yards and four touchdowns through seven games.

Armstead was selected by the Jaguars in the fifth round of the 2019 NFL Draft. He spent four years at Temple, amassing 1,098 yards and 13 touchdowns during his senior year.

Last season in Jacksonville, Armstead ran for 108 yards on 35 carries and caught 14 passes for 144 yards and two touchdowns.

Sources told ESPN Armstead is expected to recover and return to the team at full strength next season.

Former Jaguars teammate and friend Calais Campbell, now with the Baltimore Ravens, said he has spoken with Armstead and added that the case highlights the seriousness of the virus.

An ESPN report said Jaguars 23-year-old running back Ryquell Armstead has been hospitalized twice due to COVID and will miss the season. #Ravens defensive end Calais Campbell said he's spoken with Armstead and explained how that news affects his perspective. Full answer here 👇 pic.twitter.com/srwqZNjhUR