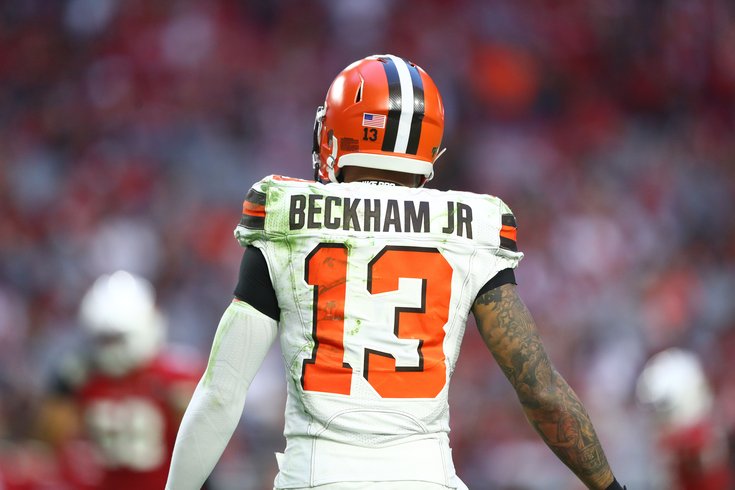 No, not Odell Beckham.

Week 7 wasn't that lucky for fantasy football team owners, as a curse of injuries seemed to envelop nearly every offense this week. If your fantasy team was able to escape unaffected, congrats. For the rest of us, there are even more player status updates to keep an eye on and roster moves to contemplate.

As we do in this space every week, here's a look at the biggest injuries from Sunday and beyond — and a look at how to handle their potential absences in games to come:

Beckham has been having a down year, but he's fantasy relevant, as he always is. At least he was. After exiting Sunday early with a knee injury, the news out of Cleveland was not good. The star wideout is done for the year:

Browns’ WR Odell Beckham Jr told NFL reporter @JosinaAnderson that he tore his ACL and his season is over. pic.twitter.com/x23IiVN7uc

With Beckham out, Browns rookie Donovan Peoples-Jones emerged, scoring a touchdown. Rashard Higgins had 110 yards and third string tight end Harrison Bryant scored twice. Making sense of the fantasy implications (and who to pick up on waivers) for next week could be a crap shoot, but it doesn't look like the Browns will be lacking weapons in a long Beckham-less period.

Did you make it until 12:30 last night to see the end of what was potentially the best game of the year? Or did you wake up to see that Drake didn't finish the game and that Chase Edmonds, Drake's back up, had a big night? Drake exited with an ankle injury that at first seemed moderate, as he was able to limp off the field himself. But minutes later, a cart picked him up on the sideline and took him into the locker room. His status is unknown as of right now but an MRI will reveal more sometime Monday. The Cards have a Week 8 bye which is a godsend for many, but the seriousness of the injury suggests it could be the Edmonds show in Week 9.

Cardinals’ RB Kenyan Drake is expected to miss “a few weeks” with a slight tear of a ligament in his ankle, per source. Cardinals are treating it like a high ankle sprain.

Seattle didn't only lose its first game of the season Sunday night, it also may be down two running backs. First is Carson, who reportedly sprained his foot, which caused him too much pain to continue playing. His status going forward is completely up in the air. Next is former sixth round pick Homer, who got his name called with Carson out and got a knee contusion. Both injuries could be minor, but could also nag each player enough to cost them playing time. Which makes Carlos Hyde a must find on waivers this week.

Source: #Seahawks RB Chris Carson, who left the game early, had his MRI and it showed that he did have a mid-foot sprain. He’s week-to-week, an indication he’ll miss some time.

Not long into his career in New York, Freeman was off the field with an ankle injury back on Thursday. The Giants have a long week to rest and prepare for Monday Night Football, and with Freeman's injury described as a "tweak," there seems to be some optimism. If Freeman is still hurt come next week, Wayne Gallman showed he is the true No. 2 against the Eagles, getting the lion share of carries and targets in Freeman's absence.

A potentially cheap helmet to helmet hit gave Dalton a concussion, and the longterm outlook for the Cowboys back up quarterback is up in the air. Which means barring a trade, Ben Dinucci is the quarterback for "America's Team." Good luck with that. Dinucci is not safe to pick up on waivers unless you are absolutely desperate. The Cowboys are almost full touchdown underdogs heading into their Week 8 tilt with the Eagles.

It's really hard to know which Steelers wideout to start from week to week. Last week it was Chase Claypool. This week it was Johnson — who had nine catches on 15 targets for 80 yards and two touchdowns. But it might not be Johnson in the Steelers' next game, as the young wideout has an "ankle bruise." He claims he feels fine, but there's a chance Johnson misses some practice time as a result.

The Niners revolving door of running backs continues to swing, with Wilson potentially out now with a high ankle sprain, an injury that could open the door for rookie JaMycal Hasty to assume top running back duties in San Francisco until Raheem Mostert returns. Wilson supplemented Jerrick McKinnon on Sunday, who only had three carries. Then in was the Hasty show. Good luck making sense or following all the happenings in the running back room — but regardless, no Mostert makes Hasty a valuable target on waivers.

Another offensive injury for the Niners comes in the form of a hamstring injury for Samuel, who as been pretty beat up all season long. Look for rookie Brandon Aiyuk to potentially make a step forward should Samuel miss time.

Harry, a wide receiver who is definitely more liked by Cam Newton than he was last year by Tom Brady, appeared to go down with a concussion in the Patriots' Week 7 loss. Harry's status going forward will be a topic worth monitoring.

Perriman actually made an early impact in the Jets best chance at a win this season so far, catching a pair of passes in  what would eventually be a loss to the Bills. But a potential concussion on a high hit took him out and could cost him some time on the field. Denzel Mims could be a regularly playable option going forward, especially without Perriman in the lineup, as he emerged as a favorite target of Sam Darnold.

If you didn't see, as the Eagles played back on Thursday, Jackson has a high ankle injury and will miss 6-to-8 weeks. As Jackson has spent most of the season on the sideline anyway, fantasy owners probably aren't too attached to Jackson and should consider outright dropping him.

A hamstring injury put an early end to Patrick's night in an ugly loss to the Chiefs, with the wideout not returning. With all hamstrings, this injury is going to be a developing situation worth monitoring.

Lindsay also has an injury that could involve a changing status by the day, as the No. 2 running back for Denver had a concussion Sunday and didn't return. If Lindsay misses time, it might make Royce Freeman a playable option for a desperate owner.

The struggling Jaguars saw another offensive weapon go down, as Westbrook left with a knee injury and never returned. More info will emerge this week but Westbrook hasn't been fantasy relevant this year.