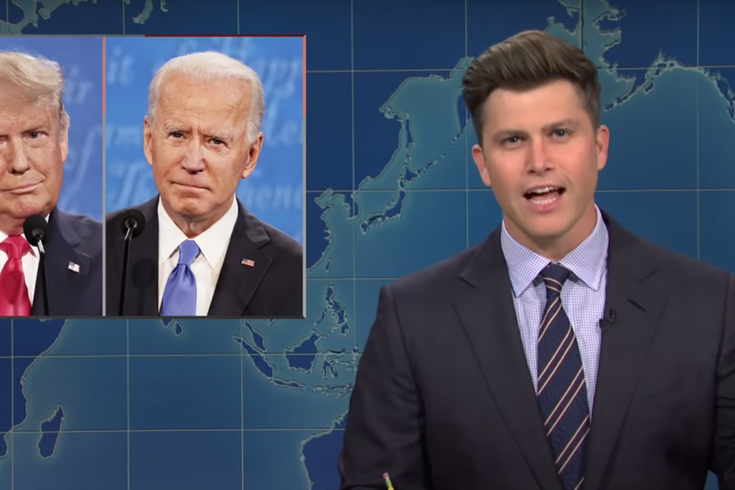 The Eagles 22-21 win over the Giants this past Thursday night made an appearance during “Saturday Night Live” this week, but it had absolutely nothing to do with the Birds earning their second win of the season.

Instead, it had everything to do with Giants’ quarterback Daniel Jones’ trip and fall on a wide-open run during the third quarter that should have resulted in a touchdown and New York taking a 14-10 lead over Philadelphia.

During the show’s “Weekend Update” segment on Saturday, cast member and co-host of the sketch Colin Jost opens up by talking about the final presidential debate between President Donald Trump and former Vice President Joe Biden.

Jost described the experience of watching the debate to be “so frustrating” because of opportunities that the Democratic presidential nominee missed to push back at many of the Republican incumbent’s claims, such as the strength of the stock market and that Biden is all talk.

“It was like Biden had an open field, running for a touchdown, and then this happened,” Jost said, teeing up the clip of Jones stumbling short of the end zone on Thursday night.


If you haven’t yet seen the clip of the Giants’ second-year quarterback falling flat on his face, here it is. It doesn’t disappoint.

Daniel Jones took it 80 yards then tripped himself 😳

Another highlight from SNL this weekend was the return of Maya Rudolph to play the role of Kristen Welker during the show’s cold open, which also focused on this past Thursday’s debate.

Welker, a Philly native, moderated the final debate between Trump and Biden. She currently is a White House Correspondent for NBC News and a co-anchor for “Weekend Today.”

Alec Baldwin returned to play the role of Trump, while Jim Carrey reprised his role as Biden.