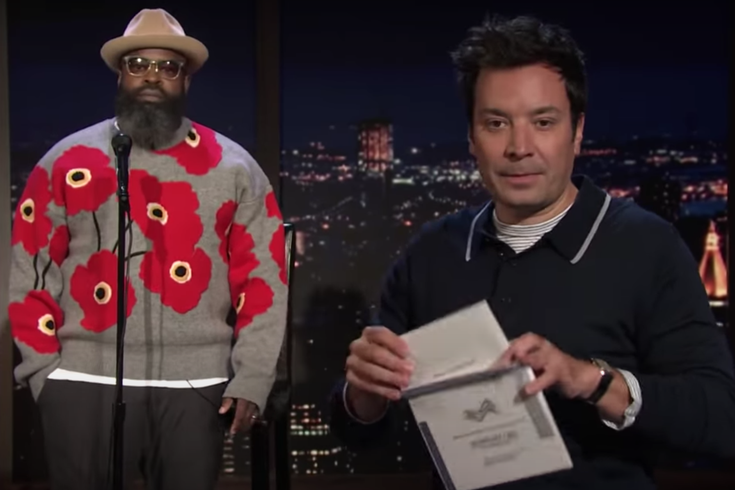 The Roots' rap walks through the entire mail-in voting process in Pennsylvania, which is acted out by Jimmy Fallon, including how to fill out the ballot and where to drop it off.

With the 2020 election less than two weeks away, The Roots are encouraging residents in their home state of Pennsylvania to make their voices heard and vote.

Led by Tariq Trotter, better known as Black Thought, the Philly hip-hop group and "Tonight Show" house band performed a rap with host Jimmy Fallon recently that explains to voters how to properly complete mail-in ballots and submit them by Nov. 3.

The song walks through the state's entire mail-in voting process, including how to fill out the ballot and where to drop it off, all while Fallon acts out the role of Pennsylvania voter.

"Pay attention, I'll mention just how to fill it out, 'cause there are pitfall and brick walls that wanna block you out," Black Thought rhymes.

For those who have not applied for a mail-in ballot yet, visit VotesPa.com to begin the vote-by-mail process. The deadline to request a mail-in ballot is next Tuesday, Oct. 27. The cost of postage is covered by the state of Pennsylvania.

The completed ballot must first go into the secrecy envelope before that envelope is placed into the larger envelope that is provided. The outer envelope must be signed and dated where indicated.

"You can't just stuff the envelope with your ballot because then poll workers say your vote's invalid," Black Thought raps. "This is called a naked ballot. It's a trick. So use your secrecy envelope and don't be a ... "

Ballots must be postmarked by no later than Nov. 3 in order to be counted for the election. They can be mailed using the U.S. Postal Service or deposited in an official ballot-collection drop box. Voters can submit their ballot either via the mail, by dropping it off at their county board of elections office, or at an official ballot dropbox.

At this time, with the deadline to request a ballot so close and Election Day not far behind that, people should strongly consider visiting a satellite election office to ensure timely delivery and return of their ballots. At these satellite locations, a registered voter can request a mail-in ballot, have it printed, vote and then submit the completed ballot – all in one location.

Polling indicates that the race for Pennsylvania could be close. Biden currently leads Trump by an average of 4.9 points in the state, according to Real Clear Politics.