Here are 16 different versions of salads, ranked from worst to best

Not all of these (in some cases) healthy dishes are equal; in fact, some are very bad 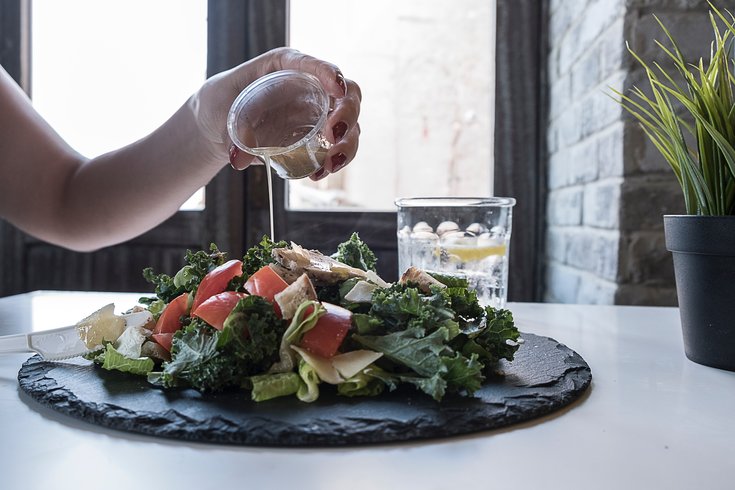 Did this delicious looking veggie salad make the list?

Salads are a very good thing to eat. They’re a healthier option than, say, a food-truck cheesesteak. These are obvious statements that preclude any pushback whatsoever.

However, some salads are great while others most certainly are not. Parsing which falls into the former or latter category, well, that’s where personal taste and preference comes into play.

To that end, I took an informal poll of salad-eating folks here at PhillyVoice to get a sense of what dishes they considered the best and which were deemed trash. (More on that later.)

I also reached out to a handful of national salad-eatery chains for their take. Only one responded; it was Chopt Creative Salad Company – closest location in Princeton, N.J. – so shame on you, salad chains with local stops who will remain nameless, thus not benefitting from a plug in this definitive listicle.

She kindly shared Chopt’s three top popular salads: Mexican Caesar, Palm Beach and the Kebab Cobb, details of which can be found via this link.

Several of the intra-office favorites also featured fancified variations on traditional salads. Health writer Bailey King offered up what she thought would be an unpopular opinion: “vegan tofu egg salad and chickpea "tuna" salads are lovely.”

What follows is a ranked list of varieties of salad, going beyond those with lettuce and the like and semantically into anything with the word salad in its name.

You may disagree with the placement of some of them, which is fine and your right as an American, but you will be wrong as this list is definitive.

With no further ado, here are 16 salad ranked from worst to best.

I once saw an egg-salad sandwich that was seemingly trapped in a vending machine for months, if not years. You know what? It looked as good as a freshly made serving of hard-boiled eggs mixed with mayonnaise and God knows what else.

This is the peak of garbage food, the easy out when you need to bring a dish to a cookout where respectable people will only give it a taste if there’s no other food left, and even then, they’ll spit it into a napkin when you’re not looking.

Why anybody would cheapen Jello with carrots, pretzels or cottage cheese is one of life’s biggest mysteries. If someone serves you this, it’s their way of saying they hate you and never want to ever see you again.

Go ahead and see if you want to eat after you watch the video below.

Potatoes should be eaten mashed or baked, not boiled and then mixed with mayo, relish and vinegar. These are the types of things that should be taught in elementary school and carried throughout life.

This is also the type of ranking that will draw many heated complaints but a hill on which I am willing to die. Ok, maybe an ant hill; I get the cultural differences here so eat as much of it as you’d like, and don’t revoke my cookout privileges, friends.

It’s essentially just a regular salad with hard-boiled eggs and cold cuts thrown atop it. Utter lack of creativity. Would not pay money for. Would pay money for a hoagie and a side salad, though.

The only thing saving wedge salad from dropping to the bottom end of this list is bacon and blue cheese, which of course are delicious and awesome.

Why didn’t it rise higher because of those wonderful ingredients? The peak laziness of a chef who thinks it’s acceptable to chop a head of romaine lettuce into quarters and call it a “salad” when it’s really a “chunk of lettuce with toppings.” Be better.

In one respect, any salad with chicken in it is technically a chicken salad. In another, the chicken is mixed with mayo, lemon juice, mustard, salt and pepper, thus disrespecting the memory of a landfowl which gave its life so you could eat its savory meat. Makes you want to join PETA when you read it presented like that, huh?

In any event, PhillyVoice’s Adam Hermann recommended chicken salad as a top-two entry. He couldn’t be more wrong, so feel free to share your thoughts with him via email (subject line: Your salad opinions are trash).

There’s nothing that particularly standout-ish about the Cobb salad itself, but it does have an interesting purported origin story that sets it apart in the salad world, apparently. To wit:

“The basic story is that the salad became a signature dish at the Brown Derby restaurant in Hollywood, which opened in 1929.

“Some argue that the salad was created by the restaurant’s executive chef Robert Kreis in that same year, and named after the restaurant’s owner, Robert Cobb, cousin of baseball legend Ty Cobb.

“Another version says that Robert Cobb himself invented the salad in 1937. Coming into the restaurant kitchen to make himself a quick meal one evening, Cobb grabbed whatever came to hand from the fridge, including blue cheese, cold chicken and salad greens. He asked the chef to throw in some bacon.

“With Cobb that evening was Sid Grauman, co-owner of Grauman’s Chinese Theatre – a Hollywood landmark and Academy Awards ceremony venue on three occasions. When Grauman returned to the restaurant the following day, he asked for a ‘Cobb salad’ – and so the dish was born.”

Unlike egg salad, it also serves as a perfectly acceptable sandwich filler. Please note that you should not make tuna salad and expect it to keep for a maximum of five days in the refrigerator. Though it’s not a traditional salad, so to speak, it is also very good for you.

The traditionalist’s comfort salad. Boring but efficient. Worthy of respect.

Tomato, mozzarella and basil on a plate? Sì grazie!

You’re at a BBQ perusing the side dishes. Baked Beans? Yuck. Potato salad? See entry above. Corn on the cob? If it’s fresh from the soil of Jersey, pretty damn good and worthy of a spot on your plate, but it’s not the best there is.

Nope, that title belongs to pasta salad, which doesn’t even need a cookout setting to be worthy of your tastebuds’ time when not overloaded with mayo or Italian dressing (zesty, if possible). It’s minimalist. It’s good.

Just ask PhillyVoice’s Matt Mullin, who responded to this internal poll with the line “Are non-lettuce based salads allowed? Because if so, pasta salad is [chef kissing fingertips].” He’s right. So very, very right.

Somehow, awesome Tex-Mex food found its way into the salad world, and any food-dish name that gives tacos and nachos an air of healthiness is A-OK by me. Sure, it’s more complicated to prepare than other entries on this list, but well worth the time.

It’s also so good that it led to this YouTube video that seems like a tryout reel for a racy Real House Chefs of Sharon Hill spinoff.

Fruit salad is good for breakfast.

Fruit salad is good for a food-truck lunch.

Fruit salad is good to have out in your kitchen to pick at during various points of any given day.

And fruit salad is refreshingly great at a cookout.

Also, it’s great for you in a way that high-calorie dressings leave vegetable-based salads unable to achieve. What fruits you include is up to you! For instance, PV’s Evan Macy does not like honeydew in his, while I think including bananas is a fool’s errand.

Romaine is the best lettuce. Caesar is the best dressing. Croutons taste best when blended with the two.

Fun fact: it doesn’t have roots in ancient Rome, but in 1920s Tijuana, Mexico, at a restaurant which attracted Americans who crossed the border to avoid the restrictions of Prohibition.

We can thank Caesar Cardini, the French-inspired chef who immigrated to America before fleeing to Mexico, for this. Here’s how Julia Child wrote about it:

Caesar himself rolled the big cart up to the table, tossed the romaine in a great wooden bowl and I wish I could say I remembered his every move, but I don't ... It was a sensation of a salad from coast to coast, and there were even rumblings of its success in Europe.

It became so popular - and so copied - that in 1948 Caesar had to patent his recipe.

In 1953, Paris’s International Society of Epicure named the Caesar Salad the greatest recipe to originate in the Americas in the last half century.

So, yeah, Caesar is the G.O.A.T. salad, and one for which a 15-minute documentary exists.

There you have it. While this list is definitive, feel free to offer your recommended changes in the comments or send a great recipe along via email!