One adult who was infected has died; seven children have fallen ill 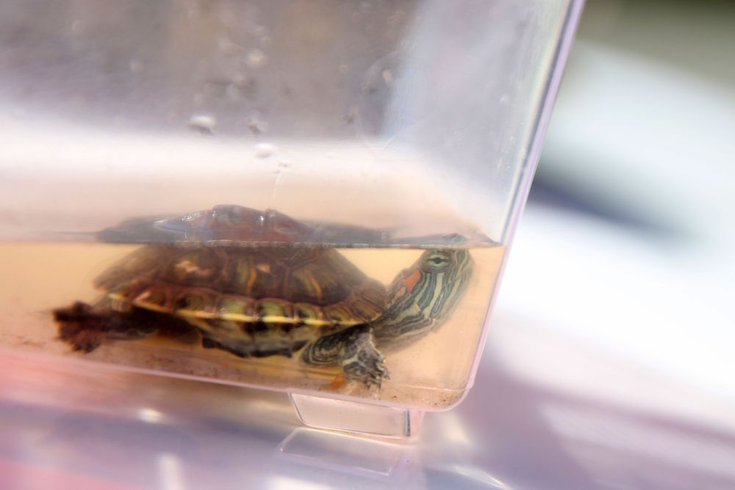 Eight people in Philadelphia and Delaware Counties have fallen ill with salmonella after handling pet turtles like the red-eared slider shown above.

A small salmonella outbreak in Southeastern Pennsylvania has been linked to the sale of pet turtles from roadside vendors in Philadelphia.

Pennsylvania health officials have confirmed nine cases of salmonella, including eight that occurred in Philadelphia or Delaware County. The cases include seven children ranging from 0 to 10 years old.

Salmonella infections are particularly harmful to young children, the elderly and people with weakened immune systems. They most commonly causes diarrhea, but symptoms also can include fever, headache, nausea and vomiting.

Four people reported the species of their pet turtles to health officials — all of them were red-eared sliders. Of the four people who reported where they bought their turtles, they all said the animals came from a street vendor. Three of vendors were located in Philadelphia.

Turtles and other reptiles are known to carry salmonella. They sometimes shed the bacteria in their feces. People can become infected when they have direct contact with turtles, their habitats or contaminated surfaces.

The state health department is was working with the U.S. Centers for Disease Control and Prevention to investigate the cases.

Health officials said people with pet turtles should take the following precautions to protect themselves from salmonella:

•Always wash your hands with soap and water after handling turtles or changing water in the tank.
•Do not allow turtles in the kitchen, dining room or any area where food is prepared or consumed. Also, do not allow turtles in bathroom sinks, tubs or anywhere infants are bathed.
•Do not eat, drink or smoke while handling turtles.
•Do not kiss or snuggle turtles.
•People at high risk of disease — children under 5, elderly people, pregnant women and people who are immunocompromised — should avoid contact with turtles.

People who have become sick after purchasing a small pet turtle should reach out to their health care providers or call the Pennsylvania Health Department at 1-877-PA-HEALTH.