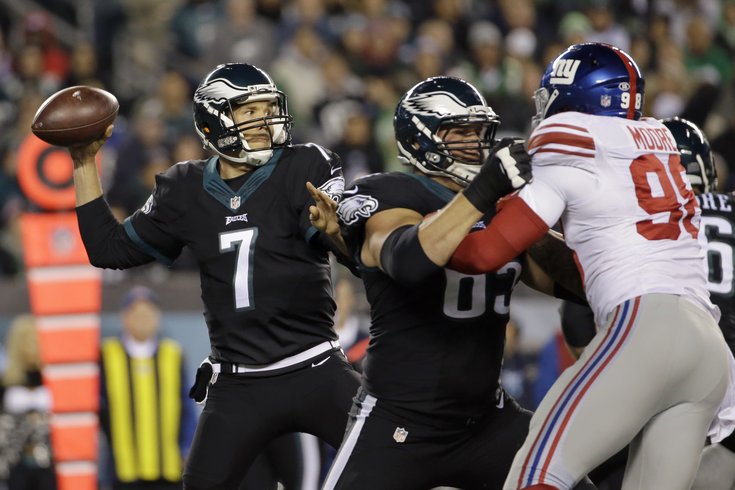 In our weekly chat yesterday, reader "Andrew" asked a good question about Sam Bradford and the lack of zip on his passes after his second ACL recovery. Here was that exchange:

Here are a few examples of what Andrew was alluding to:

This is a brutally under-thrown ball that should have been a touchdown.

This one wasn't as egregious as the first INT above, but again, it's an under-thrown ball that probably should have been a TD with a better throw.

This is a throw that Bradford probably just shouldn't have attempted in the first place, but there was a small window with which he could have hit Ertz. At a minimum, the ball placement needs to be in a spot where it's either going to be a TD catch by Ertz, or an incompletion out the back of the end zone. The one thing he can't do here is leave it short, which is what he did.

Here was a throw that was ridiculously under-thrown, so much so that when the Dallas corner turned around, it hit him in the ankles.

And yep, even when the Eagles get a good result on some plays, the passes aren't there. This ball (A) came out way too late, and (B) required Riley Cooper to slam on the brakes and barely hang on to a pass that was nearly batted down by a pair of defenders who were otherwise toast.

Speaking with reporters today, Chip Kelly was asked if he thought that Bradford was "mentally over" his two injuries.

Kelly responded, "Mentally over the injuries? I think he is now, yeah. I do. I don't see him favor his leg or think about his leg in terms of anything we're doing from a training standpoint or in a game standpoint."

Then later, Kelly was asked why Bradford seemed to be coming up short on a number of his throws.

I wouldn't necessarily directly attribute Bradford guiding passes to his two ACLs the way Kelly described it, in that he's not favoring his leg in any way. But clearly, if indeed he is "guiding" his passes, you can go ahead and call that a mental issue.