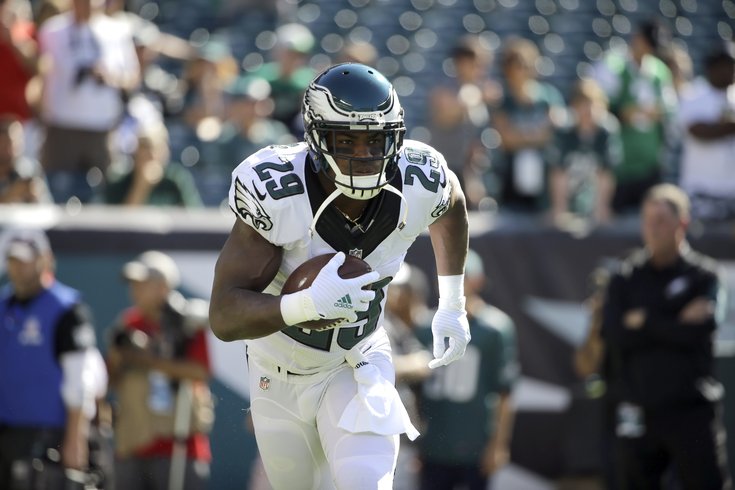 A rare moment when DeMarco Murray didn't have 8 Cowboys defenders throwing him to the ground.

For the gambling degenerates, here are my Week 7 picks. To note, the helmets indicate who I think will win the game, not cover the spread. At the end of the picks, I'll note a few teams that I like based on the spread.

Seahawks (-6.5) at 49ers: The Seahawks have struggled to close teams out in the fourth quarter this season, but it's not as if they're suddenly a bad team. Meanwhile, the 49ers are terrible. There will be people who say, "You just throw out all analysis when these two teams get together. Anything can happen." Yeah, like the Seahawks putting a beating on a garbage team.

Bills (-6) at Jaguars: I'm not the biggest believer in the Bills, but the Jags might be the worst team in the NFL. I realize that "last year" was "last year," but last year the Bills led the NFL in sacks, with 54. The Jaguars gave up the most sacks, with 71. Expect the Bills to get after Blake Bortles. The Jags are in the running for the No. 1 overall pick, and Gus Bradley's tenure as an NFL head coach could soon be coming to an end.

Buccaneers at Redskins (-3.5): Kirk Cousins and Jameis Winston have combined for 15 interceptions so far this season, so this should be a slopfest to ignore. The Bucs are a bad football team. So are the Redskins (except when they play the Eagles, for some reason). There's a belief by at least one Redskins beat reporter (Mike Jones of the Washington Post) who thinks that DeSean Jackson could be released this offseason:

I’m expecting an overhaul of the receiving corps this offseason. I can’t see them bringing DeSean Jackson back to the tune of 9.25 million next season. He’s not reliable enough. Explosive, yes. But he’s not very versatile or dependable. Cutting him would save $8 million against the cap. Garcon has a cap number of $10.2 million next season, but the team could cut him and save another $8 million. But Garcon is the type of guy that McCloughan loves. Tough, physical, hard-working, character guy. The problem is, Gruden doesn’t appear to value Garcon. If the coach does, then his play-calling suggests otherwise. Grant is a good route runner, but his impact is minimal. Crowder is a nice piece, but he’s at best a No. 2 receiver because of his lack of size. The Redskins definitely need to get bigger and more explosive at wide receiver in 2016.

Falcons (-3.5) at Titans: The Falcons started 5-0, and lost to one of the worst teams in the league in the Saints last week. This week they'll get another bad team in the Titans. Ken Whisenhunt is 3-18 with Tennessee, and although they have Marcus Mariota, they won't be good anytime soon. Not sure why this line is only 3.5, so I wouldn't touch it.

Saints at Colts (-4.5): The Colts ran the best play I've ever seen against the Pats last week. I assume there's no need to post it, right? We've all seen it already? Good? Good. I can't wait to see what they have up their sleeves against the Saints. Because really, anytime you can put Colt Anderson under center behind no offensive line instead of Andrew Luck behind a normal offensive line, you pretty much have to do it.

Vikings (-2.5) at Lions: Since 2013, the Vikings are 2-15-1 on the road. Their next two weeks they play a pair of awful division rivals (Lions and Bears) on the road. The Lions were a team I thought could compete for a wildcard berth this season. Obviously, that was wrong. Let's see you take care of business away from Minny, Vikes.

Steelers (-2) at Chiefs: The Chiefs went 11-5 in Andy Reid's first season with the Chiefs. In year two, they went 9-7. In year three, they are off to a 1-5 start, and their best player (Jamaal Charles) is out for the season. Andy may not be long for a head coaching job in Kansas City, depending on how bad the rest of this season goes.

Browns at Rams (-6): Sometimes the Rams look really good, especially against good teams. Other times they look awful against really bad teams. That makes them an incredibly unpredictable team. I'll take Rams to win this, but wouldn't touch that six-point line with a ten-foot pole. I would add analysis on the Browns here, if I had watched a second of one of their games this season.

Texans at Dolphins (-4): The Dolphins came out the gate in very disappointing fashion this season, which prompted them to be the first team to fire their coach in-season in 2015. Under new head coach Dan Campbell they blew out the Titans last week. Is that win worth riding this week? Personally, I think the Texans are garbage, so... sure.

Jets at Patriots (-9): A few days ago, we noted just how good the Eagles' defense has been this season. But holy crap... click that link and take a look at how good the Jets' D has been. On the season, opposing quarterbacks have a combined 60.9 QB rating. That's ridiculous. They're first in the NFL in yards per play, points allowed, yards per pass attempt, points per drive, and yards per drive. If there's one team that can slow down the Pats' offense, I believe it's the Jets. Take the Pats to win, but I like the Jets getting nine.

Raiders at Chargers (-4): Ugh. I hate this game. Anytime I hitch my wagon to the Chargers they burn me. A week ago, they looked really good when they put a serious scare into the Packers at Lambeau Field, which means they'll probably play like crap in a game they should win. Chargers, I guess, but I fully expect them to take the L here.

Cowboys at Giants (-3.5): After the Cowboys lost Tony Romo Week 2 against the Eagles, they rode with Brandon Weeden for three losses before deciding that Matt Cassel was a better answer at quarterback for them. Cassel was acquired a month ago in a trade with Buffalo, and has had to quickly learn the Cowboys offense and build whatever rapport he could with the Cowboys' less than stellar receiving weapons, sans Dez Bryant. I'm not sure what could have gone wrong with Weeden, seeing as he's better than Tom Brady: 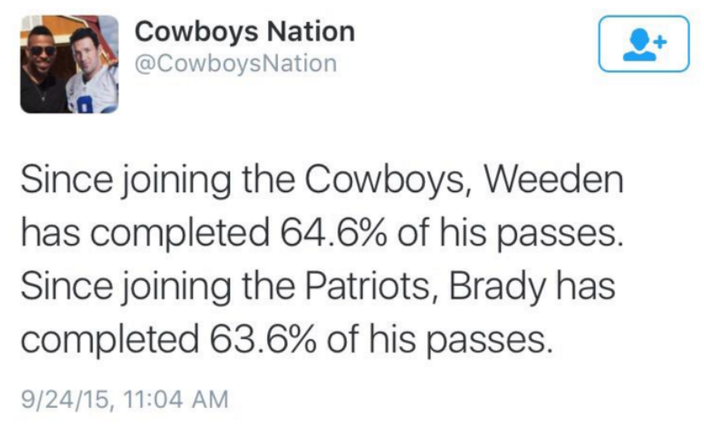 In Matt Cassel, the Cowboys have a quarterback who three teams have traded for. None have thought enough of Tom Brady to trade for him.

Eagles at Panthers (-3): I really like this matchup for the Eagles, especially on the defensive side of the ball. The Panthers' strengths offensively match up well against the Eagles' strengths defensively. The Panthers have the third ranked rushing offense, and the Eagles stop the run as well as any team in the NFL. Additionally, their best weapon in the passing game is tight end Greg Olsen, and the Eagles have a trio of good cover guys in Jordan Hicks, Malcolm Jenkins and Walter Thurmond patrolling the middle of the field.

Ravens at Cardinals (-9): The Ravens are 1-5, which is why this line is nine points, but it's not as if they've been pushed around by anyone. Baltimore's five losses have come by a combined 22 points, and they haven't lost any one game by more than six. The Cardinals have been erratic this season, which makes them a difficult team to trust betting for, or against, in that they've looked very shaky in some games, and like an offensive juggernaut in others. Still, nine points is great value. Cards to win, Ravens to cover.