Santorum on CNN: Students should learn CPR instead of crusading for gun control 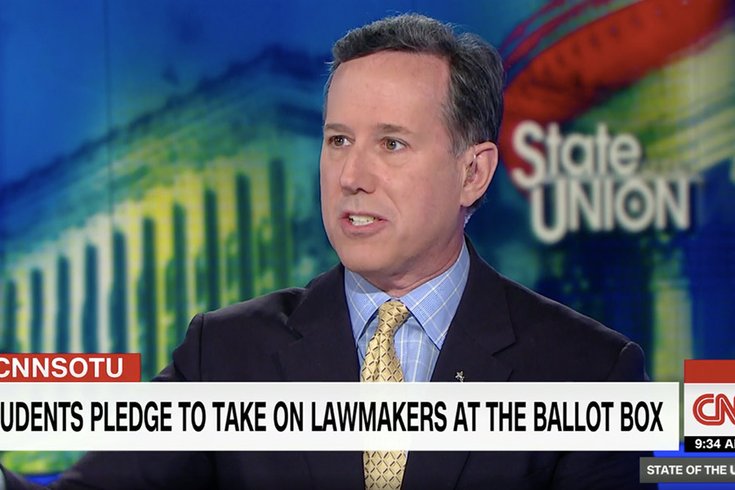 Source/CNN "State of the Union"

Appearing on CNN's "State of the Union" program on Sunday, former Pennsylvania Sen. Rick Santorum, a Republican, suggested students would be better served by learning how to revive wounded people in future shootings instead of asking lawmakers “to solve their problems.”

A day after hundreds of thousands of young people rallied across America for gun control, Pennsylvania Republican Rick Santorum said their time would be better spent learning CPR.

Santorum, the former U.S. senator and presidential candidate, said Sunday that students concerned about gun violence in their schools should learn how to revive wounded people instead of asking lawmakers “to solve their problems.”

Santorum's remarks on CNN’s “State of the Union" came less than 24 hours after an estimated 200,000 people took part in the student-led March For Our Lives in Washington to say "Enough is Enough" and demanding stricter gun control laws. There were concurrent student rallies in Philadelphia, New York, Chicago and other cities across the nation.

“How about kids, instead of looking to someone else to solve their problem," he said, "do something about maybe taking CPR classes or trying to deal with situations where there is a violent shooter.”

Program host Brianna Keilar noted that the students took action – by organizing the march. A gunman killed 17 people at the Marjory Stoneman Douglas High School in Parkland, Florida, on February 14.

“They took action to ask someone to pass a law. They didn’t take action to say how do I, as an individual, deal with this problem? How am I going to do something about stopping bullying within my own community? What am I going to do to actually help respond to a shooter?” he said.

According to Huffington Post, the daughter of a woman killed in the 2012 mass shooting at Sandy Hook Elementary School in Connecticut, quickly condemned Santorum's remarks.

“Rick Santorum’s words are an insult to the kids of Parkland, my family and to the countless others who have had loved ones taken by gun violence,” said Erica Lafferty, whose mother, Dawn Lafferty Hochsprung, a principal who died trying to protect her students, in a statement released by gun violence prevention organization, Everytown for Gun Safety.

"Today’s protests aren’t spontaneous," the post read. "Gun-hating billionaires and Hollywood elites are manipulating and exploiting children as part of their plan to DESTROY the Second Amendment and strip us of our right to defend ourselves and our loved ones."

And in Rome, Pope Francis in his Palm Sunday homily on the 35th World Youth Day, exhorted young people not to be quieted.

"It is up to you not to keep quiet," he said. "Even if others keep quiet, if we older people and leaders – so often corrupt – keep quiet, if the whole world keeps quiet and loses its joy, I ask you: Will you cry out?"

Dear young people, never get tired of being instruments of peace and joy among your peers!

Social media also lit up in response, with people taking Santorum to task for the inanity of his comments:

Here are some stats made simple for Rick Santorum:
Survival rate of pulseless trauma victims who get CPR at the scene: VERY, VERY LOW
Survival rate of people who don’t get shot in the first place: MUCH, MUCH BETTER

As a surgeon, I’ve operated on gunshot victims who’ve had bullets tear through their intestines, cut through their spinal cord, and pulverize their kidneys and liver. Rick Santorum telling kids to shut up and take CPR classes is simply unconscionable.

Dear Rick Santorum: CPR is good for heart stoppage. Not good for victims of multiple AR-15 bullets, which typically impart 3 times the lethal energy upon impact than a 9mm handgun bullet. AR-15 bullets obliterate organs and cause so much bleeding that victims die very quickly. https://t.co/5E0HBUFT9b

I would suggest Rick Santorum learn CPR because the GOP is dying and we will be losing some in November.