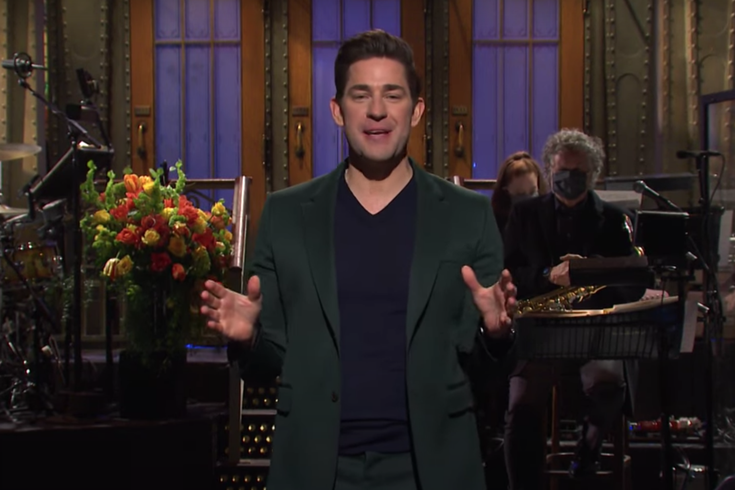 Actor John Krasinski was originally scheduled to host SNL last March, but his appearance was called off due to COVID-19.

For the first time in 2021, "Saturday Night Live" returned to the air this weekend with John Krasinski hosting the sketch comedy show.

The 41-year-old Krasinski, who earned his claim to fame as Jim Halpert on "The Office," told viewers during his opening monologue on Saturday night that SNL has been his favorite television show since he was a kid.

"I genuinely cannot tell you what a huge deal it is for me to be here right now," Krasinski said. "To actually be here now on this historic stage is nothing short of mind-blowing for me."

Not surprisingly, the NBC sitcom about everyday life for the employees at Dunder Mifflin in Scranton earned a significant chunk of attention during this week's opening monologue.

As Krasinski was speaking to the audience, several SNL cast members would jokingly raise their hands and address him as Jim. They also would ask where Pam Beesly, played by actress Jenna Fischer, was and whether Krasinski would kiss her.

For those who have yet to stream "The Office," Jim and Pam transform from flirtatious co-workers to the show's most-famous married couple over its nine seasons.

Confused by all the jokes and references to "The Office," Krasinski is joined on stage by cast member Pete Davidson. This leads to the SNL cast members in the audience referring to Davidson as Pam and calling on both to kiss.

"I think we got to give them what they want," Davidson said to Krasinski, leading to both men kissing on stage.

Krasinski appears throughout the show in a number of sketches.

In the cold open, Krasinski plays the role of Tampa Bay Buccaneers' quarterback Tom Brady. Krasinski is famously known as a Boston native and avid sports fan, which includes the New England Patriots.

Krasinski also performed in a bit where he sang hypothetical lyrics to the theme music of "The Office."

Krasinski was originally supposed to host SNL last March, but his appearance was called off when the show was put on hold at the onset of the COVID-19 pandemic.

It's not the first time someone in Krasinski's family has hosted SNL. His wife, actress Emily Blunt, hosted the show back in 2016.