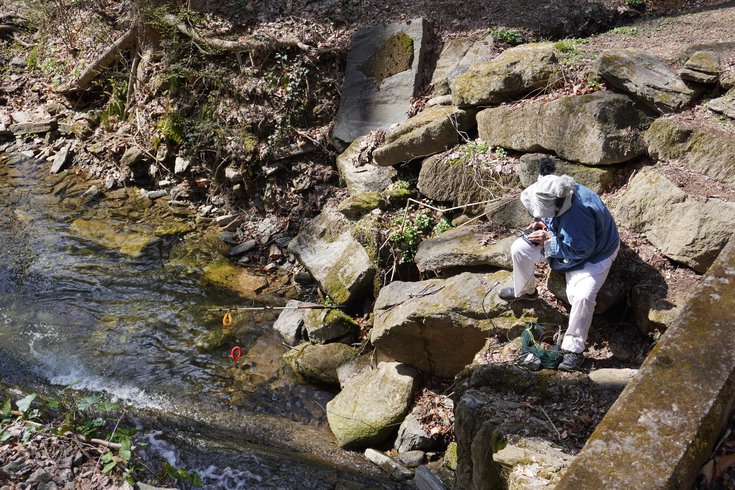 Artist Liz Phillips recording a sound along Schuylkill River for "The River Feeds Back," an audio exhibit coming the Academy of Natural Sciences in June.

An immersive auditory experience will bring sounds from all along the 135-mile Schuylkill River to the heart of Philadelphia, where the waterway feeds into the Delaware.

"The River Feeds Back" will run from June 1 to October 30 in the Dietrich Gallery at Drexel University's Academy of Natural Sciences at 1900 Benjamin Franklin Pkwy. The "layered sound map" was created by Annea Lockwood and Liz Phillips, two New York-based artists known for their work with audio.

The event is free with the $22 price of admission to the museum, which is open from 10 a.m. to 5 p.m. on Wednesday through Sunday.

The experience will feature recordings taken along the river, from both above and below the surface, as well as some of its tributaries – including the Wissahickon, Tulpehocken and French creeks.

Participants can experience the exhibit through a variety of sound portals set up around the gallery. The area where each recording was taken will be on a map etched onto a wooden table.

The experience will be "revelatory," said Marina McDougall, the academy's vice president of experience and management.

“Their attentive recordings made with hyrdophones and custom-made microphones submerse us into a subaquatic world of immense textural detail, revealing a realm that we had not previously known," McDougall said.

The installation is the first component in a broader project the academy is carrying out this summer, called "Watershed Moment." It will feature other art exhibits and an investigative watershed adventure walk.

The events are part of the academy's "Water Year" celebration, which is meant to get people thinking about their local watersheds and the need to protect them.

"The River Feeds Back"