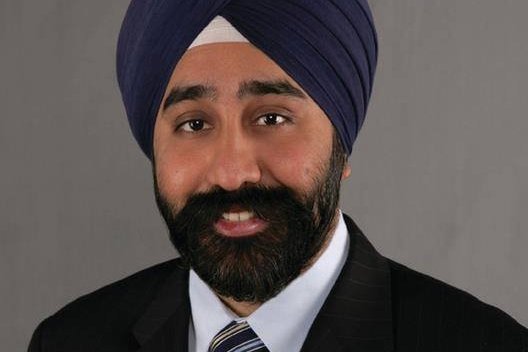 As New Jersey approaches its mayoral and legislative elections Tuesday, another wave of candidate-attacking racist fliers has circulated in the state.

The fliers depict candidate Ravi Bhalla, who is running for mayor of Hoboken, wearing the traditional turban of his Sikh faith. Beside his photo, in bold red letters, the fliers read, “Don’t let TERRORISM take over our town!”

Falsely linking Bhalla to terrorism is the second case of racially charged, defaming fliers in New Jersey this week. An anonymous political mailer in Edison called for the deportation of two school board candidates, Jingwei Shi and Falguni Patel, with the hateful words, “The Chinese and Indians are taking over our town!”

The Hoboken fliers began circulating Friday night, placed on car windshields. The flier then notes an alleged conflict of interest between Bhalla and the city’s water supplier, which is a client of the law firm where Bhalla is a partner.

“I want to use this incident as an opportunity to affirm to each other and our children the value of living in a diverse community where we are judged by the content of our character -- not by the color of our skin or how we worship,” he wrote.

“At this time in our nation’s history when we have a President who seeks to divide us, it is critical that we come together as a community and stand up for American values.”

The fliers appear to be a modified version of earlier ones circulated by one of Bhalla’s opponents, Michael DeFusco, who had previously noted Bhalla’s “conflict of interest.” The anonymous fliers circulated Friday added the terrorism comment, but use language to suggest that they were from the actual DeFusco campaign.

DeFusco has since taken to various social media platforms to publically condemn the racist fliers and note that they were not produced by his campaign.

“Friday night, a disgusting, racist flier calling my colleague and opponent Ravi Bhalla a ‘terrorist’ appeared in Hoboken, and it was made to look like it came from my campaign,” DeFusco said in a statement.

“The flier is a crude, photoshopped copy of a previous mailer with a racist epithet added. This is gutter politics at its worst -- we’re working with the Hoboken Police Department and all relevant authorities to find out who perpetrated this smear and who is trying to paint the campaign we’ve built together as racist.”

My friend @RaviBhalla is running for Hoboken mayor. This vile hateful flyer was put out. I️ condemn it! We all must condemn bigotry & hate! https://t.co/3Wz5Io9kNZ

“We must all condemn bigotry and hate,” he wrote.

Hoboken Police Chief Ken Ferrante tweeted that police are investigating this as a potential “bias crime.”

The @HobokenPD is investigating a possible Bias crime regarding campaign literature disseminated in central portion of Hoboken last night.