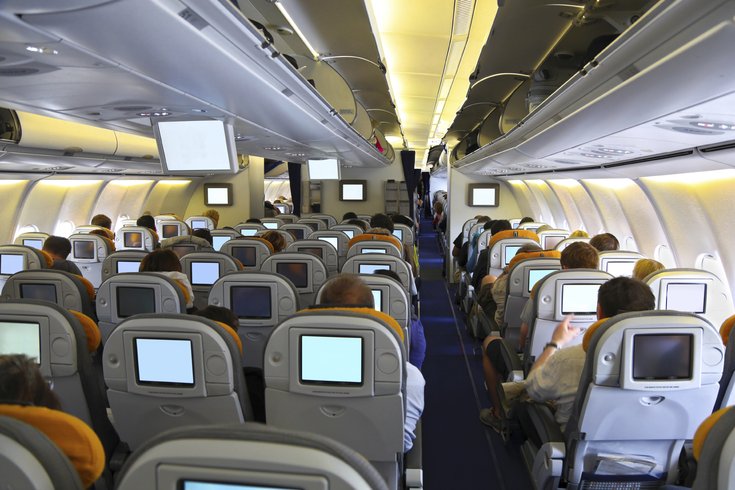 If my son were awake, I know his attention would be powerfully and inextricably pulled into the sea of screens in front of me. What would he see?

The car seat is gate checked. Our carry on, safely stowed. It’s a long afternoon flight from Utah back to Florida. Having traveled westward to attend my paternal grandfather’s funeral and visit my father who is in hospice, my heart is full.

If I were alone, I would pull out my journal and spend a few hours writing. However, my 3-year-old son journeys with me.

“Mama! Look!” he exclaims, pointing out the window.

Fascinated by aviation, he joyfully pulls my attention into the present moment. We admire airport vehicles, the ground crew and take off technicalities.

My son spends the vast majority of the flight in dreamland while napping in my arms. I find deep comfort in closing my eyes to meditate, holding him close.

When my eyes open, I notice a plethora of drop down television monitors in front of me. The plane is dark and nearly all of the window shades are drawn. The sun shines outside, but one wouldn’t know it. The engines hum and the screens flash their images in silence.

Most of our fellow travelers ignore the steady stream of visual stimuli set up to distract and entertain. They sleep, read, or engross themselves in personal electronic devices. I could pull out a book and focus elsewhere too. Yet, I’m interested. If my son were awake, I know his attention would be powerfully and inextricably pulled into the sea of screens in front of me. What would he see?

A police officer steps on the bare chest of a man while pointing a gun to his head.

Two men in prison engage in an intense fistfight.

At the scene of a crime, a dead body is covered by a white sheet.

An angry man corners a woman. He holds her head and bangs it against a wall multiple times while yelling in her face.

Basically, a late night television drama featuring the hierarchical and violent world of prison, domestic dispute, and police intrigue is on display in every direction.

If I were traveling alone, I would join the majority of travelers around me and ignore the negative dross. But I’m not traveling alone. I worry. What if my 3-year-old wakes to take in these scenes of violence -- scenes that I would never purposefully allow him to witness?

Gratefully, today all flights are free from cigarette usage. Yet, the secondhand media smoke emitted from poorly chosen in-flight entertainment is also poisonous and toxic, especially to children.

It wasn’t long ago that smoking aboard an airline was permitted. Nonsmokers had to endure hours breathing in the haze of secondhand toxins while fellow consumers exercised their “right” to smoke. Gratefully, today all flights are free from cigarette usage. Yet, the secondhand media smoke emitted from poorly chosen in-flight entertainment is also poisonous and toxic, especially to children.

In my little one’s world, police officers do two things: give tickets if you drive “too fast” and “help people” when there is a “bad, bad crash.” My son is reminded daily to treat people with respect and not push, hit, kick, or shove as a means to get his way. He has never seen films or movies featuring scenes of physical violence.

Certainly, he has never witnessed images of a man banging a woman’s head against a wall.

That scene, in particular, provoked me to reach up and push the button for the stewardess or steward.

“My 3-year-old is napping,” I say quietly. “He may wake up soon and I don’t want him to see the film being shown. It’s inappropriate for children. I don’t want him exposed to the violence in it.”

“I haven’t even looked to see what it is. I just tune it all out,” she looks at me.

“Could you please change the show?” I inquire.

As she walks away, I reflect upon our culture’s appetite for violence. We consume it like candy. In fact, we are so desensitized that scenes described above are banal, mundane, and representative of the daily visual refuse present in an increasingly number of public spaces from restaurants to airplanes. The American Academy of Pediatrics states, “Extensive research evidence indicates that media violence can contribute to aggressive behavior, desensitization to violence, nightmares and fear of being harmed.” With astuteness, the AAP unwittingly describes contemporary American culture.

A Senate Committee on the Judiciary report entitled “Children, violence, and the media: a report for parents and policy makers,” notes that by the time a child is 18, she or he will have witnessed 200,000 violent actions and 16,000 murders on television alone. The numbers skyrocket if one considers the violent acts/murders present in film entertainment.

I don’t know how many murders or acts of violence my son will have witnessed by the time he is 18. It probably will be in the thousands. Will he sit down one day consuming popcorn while watching heads, arms, torsos and legs torn apart in the latest action flick? Will he look up one day from an airline seat to find his conscience undisturbed by acts of domestic violence? I don’t know.

What I do know, without a doubt, is that today’s poorly chosen in-flight entertainment would strip away a precious innocence in my 3-year-old son. Should he wake from his nap, he will find images of adults, police no less, behaving in all of the ways he has been told are clearly wrong and in a manner that is hard for him to currently understand or even imagine. One day, we will talk openly about the Fergusons and Baltimores of the world. One day his innocence regarding the behavior of adults will end and he will learn how to integrate, and hopefully mindfully respond to, the reality of human injustice, racism, sexism and our perpetual penchant for violence. One day. But not today. Not when he’s 3. And certainly, not because of the poor decision of an airline employee blind to the developmental needs of children.

On a flight, people are literally buckled in and trapped in a visual field of screens featuring content outside of their power to control. For parents of little ones who find the content questionable, disturbing, and offensive, the sense of powerlessness is distressing.

“We can’t change the show,” the stewardess returns to tell me. “People have paid to watch it.”

“Well, I guess you could always distract him …” she suggests her voice trailing off upon considering that a screen exists in every frame of the visual field. Then she leaned in close. “Look, I agree with you. But they won’t listen to me. They only listen to consumers. When you go home, write an email and let them know how you feel.”

Thankfully, my son slept through the flight awakening only when wheels touched ground once again. Upon returning home, I took the stewardess’ advice and composed an email requesting that whomever picks the entertainment consider making a friendlier selection with the wellbeing of the youngest and most innocent aboard in mind.

Two days later, I received a response assuring me that “the issue of in-flight content” is taken “very seriously.” The customer service representative stated that her company’s editing standards are “more stringent than those used by the television networks.” However, at home, if questionable content is aired, one can simply turn off the television or a child can be guided out of the room. On a flight, people are literally buckled in and trapped in a visual field of screens featuring content outside of their power to control. For parents of little ones who find the content questionable, disturbing, and offensive, the sense of powerlessness is distressing. Furthermore, given the violence present in standard television fare, what I saw in flight and knowing that R-rated films like “American Sniper” or “Fight Club” are routinely shown on planes -- with only their most gratuitous scenes removed -- I didn’t find the response settling.

American poet, Alan Ginsberg noted: “Whoever controls the media, the images, controls the culture.” Perhaps he’s right. Perhaps we are a violent culture because we have been socialized to be one. Or, maybe it is the reverse. Like chimpanzees, our closest animal relative, we naturally create hierarchical structures of primarily male power -- which underscored every plot line in the police drama shown en route. Such structures are maintained and enforced by violence, or the threat of violence, and are mirrored in the art and film we create and relentlessly consume.

We flew to Utah to visit family, bury my grandfather with respect, and be present for my father during a rather difficult time. Holding my father’s hand post-stroke, I spent much time reflecting on loss. As I held my sleeping son in my arms on our journey home, reflections on loss continued.