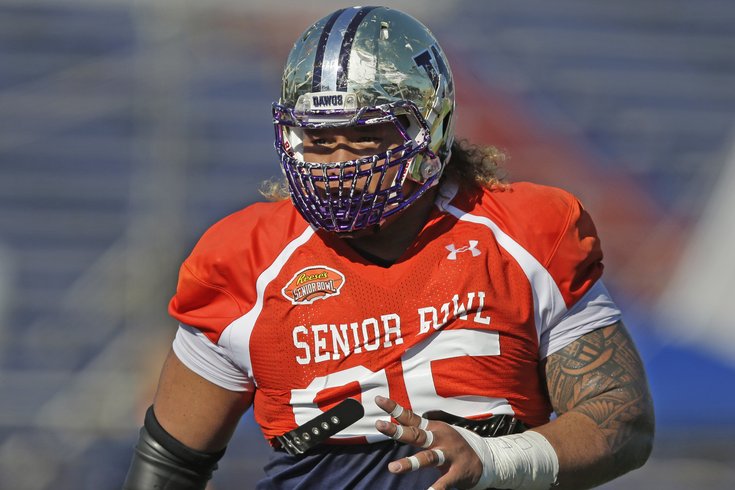 Washington NT Danny Shelton plays as hard as his nicked up helmet would indicate.

MOBILE, Ala. -- Day 2 in Mobile was about 65 and very sunny. I'll be coming back to the Northeast with a sunburn. Here are my notes from Day 2 of Senior Bowl practices:

- We covered former Oregon and SE Louisiana QB Bryan Bennett at length, but did not note how he actually played in his first action during practice on Wednesday. In short, for a guy coming in late, he was impressive. He showed off a strong arm, he was accurate on his short and intermediate throws (mixed bag on his deep balls), and showed an ability to run. Here is how I would rank the performances of the QBs in attendance here so far:

Of the six, Petty would probably make the most sense for the Eagles if you could get him in the middle rounds, and maybe Bennett or Sims in the late rounds.

- The Eagles don't have a big need for defensive end help, but one guy who has impressed has been Stanford's Henry Anderson. He's 6'6, 287, but is extremely nimble for his size. He was disruptive all day Wednesday.

- Another defensive lineman who dominated at times was NT Danny Shelton. He may be the highest player drafted here, because impact NTs are rare, and they tend to go quickly on draft day. Shelton has great power, he moves the pocket backwards, and he has great hustle.

- The offensive lineman who did the best job against Shelton was Hobart's Ali Marpet.

- The biggest human being here is Florida OT Trenton Brown, who is 6'9, 376. He moves better than you would expect for a guy his size.

- Utah's Nate Orchard followed up a dominant Day 1 with another dominant Day 2. On Day 2, the North Team's offensive line held him all afternoon, and he still made plays. Legit option for the Eagles at 20, depending on how free agency shakes out.

- Minnesota RB David Cobb has a number of nice carries both as a runner and a receiver. He's a bigger back at 5'11, 229, and could be a good complement to LeSean McCoy at the right value.

- Duke WR Jamison Crowder has been awesome. Great speed, great route runner, attitude, and on Wednesday he made the play of the day, snaring a one-handed grab near the sidelines.

- Quinten Rollins of Miami (OH) was toasted by Crowder deep Day 1. On Day 2, Rollins broke up several deep balls. He did a good job sticking with his man while getting his head around to locate the ball and break up the pass. I didn't realize corners actually turned to look for the ball. That concept seems foreign to me.

- One WR here who might make some sense for the Eagles as a guy who can stretch the field is Ohio State's Devin Smith, who averaged a ridiculous 28.2 yards per catch on 33 catches in 2014, although he's been quiet. The Eagles spoke with Smith, according to NJ.com's Eliot Shorr-Parks.

- If you want to take versatility to an extreme, Michigan State WR Tony Lippett also played some corner for the Spartans this season when they had some injuries. I wonder if NFL teams might look at his size (6'3, 193) and envision him on defense. Lippett struggled with drops on Wednesday.

- Miami TE Clive Walford is separating himself from the pack at a weak tight end position here at the Senior Bowl. He got his hands on a boatload of passes Wednesday, including a few diving catches.

- Rough day for Northern Iowa RB David Johnson. He dropped a TD pass, double caught what should have been an easy reception, and fumbled a handoff exchange. Auburn's Cameron Artis-Payne also fumbled, which is hard to do, considering there's no tackling.

- One tall outside linebacker here is 6'6, 262 pound Lynden Trail from Norfolk State. He was up and down. He broke up a pass to a TE (up), and looked really stiff in space trying to "tackle" a running back (down).

Since Chip now has "the juice," (nearly full control of the team), we'll keep running tabs on all his whereabouts. Here's where he has been so far this offseason: 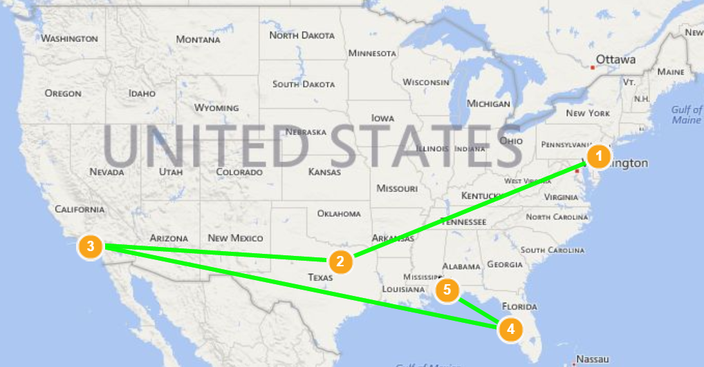 I'm sure Chip probably goes home in between trips, but...