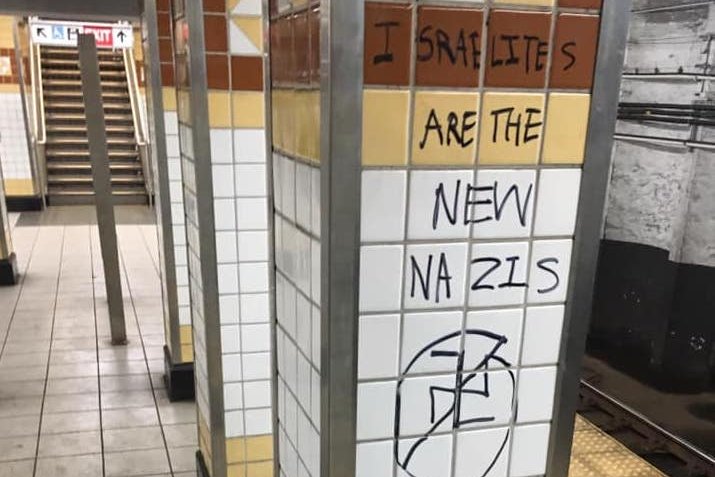 Graffiti with anti-Israel messages, including one reading “Israelites are the new Nazis”, was found Tuesday morning at SEPTA’s Spring Garden Station of the Broad Street Line.

The graffiti, photographed by Facebook user Grant Zachary Briskin, was written in what appears to be black marker on the pillars near the tracks, and on a gated door to a SEPTA employee area:

One part of the graffiti included a number of hashtags: #BoycottIsrael, #KillJail, #FreeMumia (in reference to how Philadelphia District Attorney Larry Krasner has handled the case of Mumia Abu-Jamal), #AbolishPrisons, #PreservePhilly, and #StopBeingABigot.

Briskin told PhillyVoice he discovered the graffiti around 6:20 a.m. Tuesday, and he tweeted a picture at SEPTA's Twitter accounts. The @SEPTA_SOCIAL account responded, asking for more information:

Thanks for reporting this to us. Is this Northbound or Southbound? What part of the platform is this? ^KW

The graffiti has since been removed, according to SEPTA spokesperson Carla Showell-Lee.

Last week, President Trump called the Democratic Party “anti-Israel” and “anti-Jewish” because of the party’s response to comments by U.S. Rep. Ilhan Omar.

Showell-Lee said SEPTA's vehicles and properties are checked daily for graffiti by station managers, and cleaned as soon as possible. She said in this case, the graffiti was cleaned immediately. Showell-Lee said SEPTA Transit Police normally conduct criminal investigations to identify vandals and hold them responsible.

SEPTA Transit Police, of course, have been on strike since last Wednesday. One day after the transit police went on strike, a man was fatally stabbed on a Broad Street Line concourse during the morning commute.