The woman was punched by a man who had been sleeping on a bench; There is a $1,000 reward for information leading to an arrest 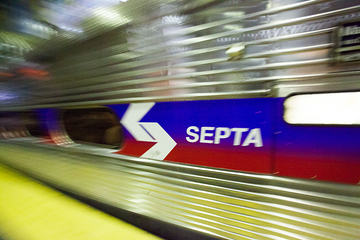 SEPTA police are searching for a man who investigators say punched a SEPTA custodian early Monday inside the Broad Street Line's Walnut-Locust Station in Center City. There is as $1,000 reward for information leading to an arrest.

A SEPTA employee was attacked early Monday morning at the Walnut-Locust Station along the Broad Street Line in Center City, transit police said.

The incident happened shortly before 6:00. The SEPTA worker,  a custodian, had been cleaning in the station and swept beneath a bench where the man who attacked him had been sleeping, investigators said.

RELATED: Philadelphia employers will soon be required to offer commuter benefits to workers

The custodian told transit police she was punched in the face by the man, causing her to fall and hit one of the pillars inside the station. She was taken to Thomas Jefferson University Hospital to be treated for unspecified injuries.

The suspect left the station and fled on Walnut Street toward 15th Street, authorities said. SEPTA police released images of the suspect and are offering a $1,000 reward for information leading to his arrest.

SEPTA is offering a $1,000 reward for info that leads to the arrest of a suspect wanted in connection with an assault of a #SEPTA employee today at 5:50am at Walnut-Locust Station. Anyone with information about this man is asked to contact SEPTA Transit Police at (215) 580-8111. pic.twitter.com/XRwEl0kntq

The apparent assault comes as SEPTA continues to struggle with security issues and crime, particularly on its Market-Frankford and Broad Street subway lines. In April, the head of SEPTA's police union voiced his frustration about staffing levels in the police force and the difficulties SEPTA has had recruiting new officers.

During the last year, SEPTA has hired unarmed guards and social outreach workers to monitor its facilities and work with populations of people who are homeless, mentally ill and addicted to drugs who have taken refuge inside stations and on public transportation vehicles, but challenges hiring new transit police recruits have persisted.

Anyone with information about Monday's incident can contact SEPTA Transit Police at (215) 580-8111.