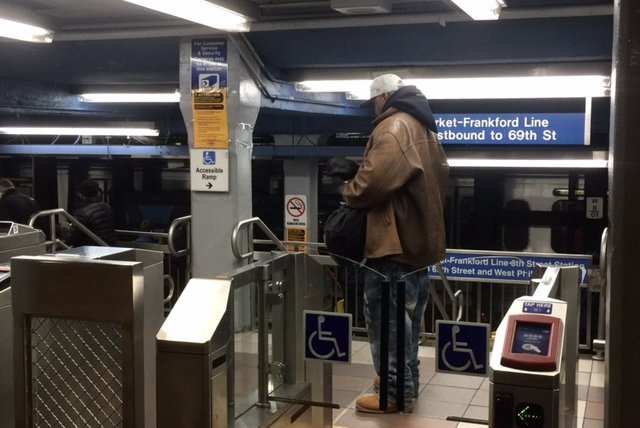 A turnstile on SEPTA's Market-Frankford Line.

The subway turnstile jump isn’t as ubiquitous in Philadelphia as it is in New York City, but SEPTA still decided to ease up on riders who evade paying their fares in a pinch.

The transit authority decriminalized fare evasion earlier this year, according to WHYY, reducing fare evasion tickets from $300 to $25, a 91 percent decrease. Repeat offenders also get four strikes before being banned from trains, buses, and trolleys.

The policies were put into place Jan. 14, according to WHYY.

SEPTA spokesperson Carla Showell-Lee said the true goal of the new program is to focus on repeat offenders, by tracking violations and banning them from SEPTA services.

Showell-Lee went on to say, though, that the policy is meant to ease the financial burden when a fine is issued, and remove the stigma associated with summary violations. Showell-Lee also said the new policies will ideally free transit police resources up for system patrol, rather than bogging them down with administrative tasks.

SEPTA - South Eastern Pennsylvania Transit Authority.
Its good to see them not put people to jail for jumping the turnstiles.
More time to crack down on the weirdos who pee in the elevator

👏 this is what I like to see! Thank you @SEPTA_SOCIAL https://t.co/c7Gq18GpOE

great news, now when will they fix the septa key so u can swipe people in?? @septa @SEPTA_SOCIAL https://t.co/fW5TCqq6KT

SEPTA’s new tact is decidedly different from New York City’s metropolitan Transportation Authority, which estimated it lost $215 million in revenue in 2018 because of fare evaders and announced a crackdown last December.

Philly’s transit authority is having a good few weeks: Its recently-rolled-out beta website for SEPTA Key has also received a warm welcome.