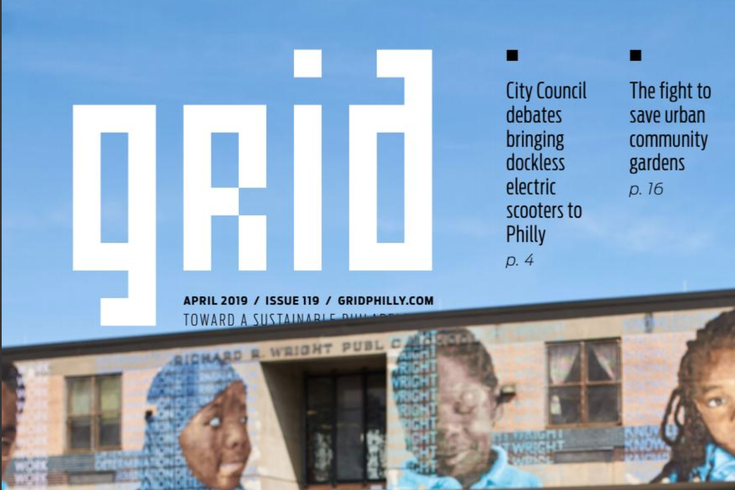 The April 2019 edition of Grid Magazine.

Grid, the monthly Philadelphia-area magazine covering sustainability in the city, announced Wednesday it can no longer sustain itself solely on advertising funds.

The magazine is asking for help from its readers, it said in a social media push Wednesday, with a new push for subscriptions starting at $2.99 per month:

“For the past 10 years, Grid has been distributed free throughout the Greater Philadelphia Area, including in public libraries, through the Housing Authority and just about any place that has asked. With print advertising in decline, this model is no longer sustainable. If we are to continue, we need your help. Please consider subscribing. Together we can make Grid sustainable.”

According to a letter from Editor-in-Chief Alex Mulcahy in the magazine's new April 2019 issue, Grid’s goal is to reach 500 subscribers by June 30.

“Reaching the goal of 500 will be evidence that Grid is viable in the long-term,” Mulcahy wrote. “Falling short will suggest that it is not.”

Grid is offering four different levels of subscriptions, the first three of which come with the same benefits: a print edition of Grid delivered to your residence.

Each issue of Grid is also available as a digital magazine on its website, including previous issues dating back to February 2009.

It’s been a busy, and turbulent, year for Philly-area small media.

Since the beginning of March, Spirited Media announced it was selling its hyperlocal news sites, including Billy Penn; the Reading Eagle’s owners announced they filed for Chapter 11 bankruptcy protection; and the free tabloid Metro gutted its Philadelphia editorial staff.