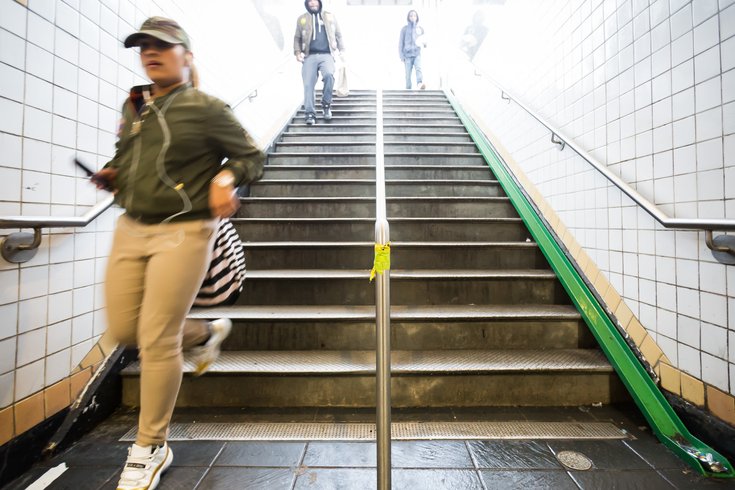 No, it's not your imagination – more of those narrow, green ramps tucked below the handrails are popping up at more SEPTA subway stations in Philadelphia.

SEPTA says they are bicycle "stair runners," and they're being installed to help cyclists ease their bikes up and down stairways.

Bicyclists are permitted to bring their bikes aboard subways during weekdays before 6 a.m.; between 9 a.m. and 3 p.m.; and after 6 p.m. Bikes also are allowed on the subway trains all day on weekends and major holidays. The stair runners will make it easier for commuters to take advantage of this perk.

The stair runner project is a collaboration between SEPTA's Office of Innovation and its Special Project Department to enhance the transportation agency's bicycle access program, said Rodrick Evangelist, an special project engineer at SEPTA.

"With the added feature of the stair runners," he said via email, "the stations are more accessible for bike riders and can help to make their commuting experience worthwhile."

So far, SEPTA installed stair runners at the Tasker-Morris and Spring Garden stations back in February. The two stops were chosen based on "their high demand in bicycle usage." The Tasker-Morris Station in August became the first to feature an underground bicycle infrastructure; it has has 16 U-racks.

In addition to installing more street-level racks near and in stations, SEPTA says it will put the runners at three to four more stops in the coming months. Those locations include the Second Street stop on the Market-Frankford Line and the Cecil B. Moore, Snyder and Ellsworth-Federal stops along the Broad Street Line.