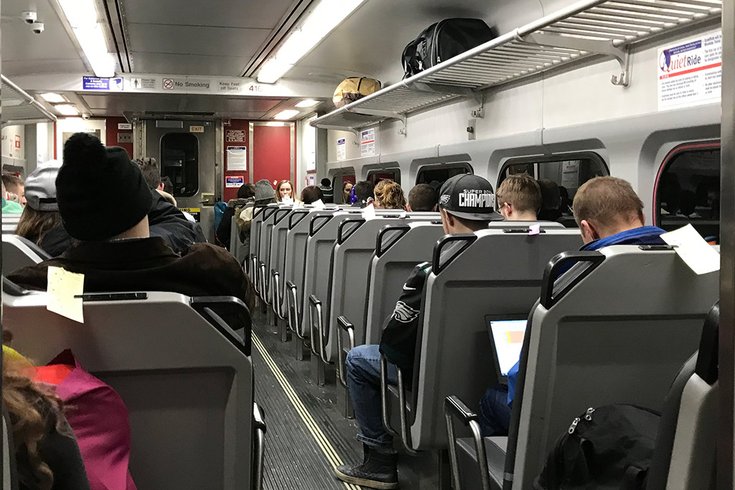 The second-to-last train out of Doylestown on Wednesday night was full of young Eagles fans making the trip into the city for Thursday's championship parade.

To prepare for the onslaught of Eagles fans already heading into the city Thursday morning for the Eagles victory parade, SEPTA and PATCO have suspended service on some Regional Rail lines.

As of 6:30 a.m., service was halted on the Cynwyd and Chestnut Hill West lines.

Cynwyd: Service is suspended until further notice due to the Eagles parade. Please check https://t.co/9SFObJGg1v for alternate service options.

Delays were reported on the Thorndale, West Trenton, Warminster and Doylestown lines – a theme SEPTA said passengers to expect throughout the day. Inbound train service for SEPTA trains will end around 9:30 a.m. Thursday.

RRD: AM inbound train service will end at approximately 9:30 am

Due to heavy passenger travel, expect delays and crowded conditions

Travelers on the Broad Street Line and Market-Frankford Line receive free fares today. After suspended service at the BSL's Walnut-Locust Street stop around 10:00 a.m., service was restored by 1:00 p.m., shortly after the parade passed the location during its route.

Through reports have shown less crowding and lines, by 10 a.m. the BSL's Walnut-Locust Street stop was suspended from service due to overcrowding on the street.

Trolley lines are running as normal except at the City Hall stop, which will not be running all day.

The Market-Frankford and Broad Street Lines are your best options for travel to-and-from the #EaglesParade TODAY. And thanks to @IBX, these "best bets" are FREE: https://t.co/Ld1zTu2Fo0! #ISEPTAPHILLY #PhillyProud #BleedGreenRideSEPTA #FlyEaglesFly pic.twitter.com/UzaCYxlcnQ

.@SEPTA Norristown High Speed Line train is packed with @eagles fans in route to the parade. The wait wasn't long at all. My train conductor lead the crowd in singing the Eagles fight song. #FlyEaglesFly pic.twitter.com/70NEr9MqKA

Eastbound travel to New Jersey on the PATCO line was suspended as of 6:30 a.m. as well. About 1:30 p.m., the trains will begin heading east to move parade-goers back to the Jersey side of the river.

Around 6 a.m., PATCO reported a steady stream of riders in its first morning trains, but parking is growing more limited at nearby station lots. Tickets are unavailable but Freedom Cards can be loaded up at a station.

For westbound PATCO trains, departures will be limited to Lindenwold, Woodcrest, Ferry and Broadway.

PLEASE NOTE: At this time, we are shifting to our WB departures at the 4 open NJ stations (Lindenwold, Woodcrest, Ferry and Broadway). Empty trains will start at those stations and head straight to 9th.

The schedule starts at Lindenwold at 5:58A, Woodcrest at 6:05A, Ferry at 6:21A and Broadway at 6:20A. Trains will be departing from those stations every 16 minutes.

@RidePATCO is doing a great job at Woodcrest with the crowds. Everyone is in good spirits and being patient. #FlyEagelsFly #SuperBowlParade

.@RidePATCO is running a Parade operation today every bit as impressive as the @Eagles offense in #SuperBowlLII pic.twitter.com/AjGll8TkbY

An accident on I-95 is slowing down traffic on the southbound side during the early morning commute.

In addition to long lines and crowded trains, passengers headed into Philly can expect many sing-a-longs to the Eagles fight song as well. Here are some scenes from the train stations and rides this morning.

Doors open for the second train at Elm Street #Norristown. This was just before a #SEPTA chant #EaglesParade #FlyEaglesFly #Philly #Eagles pic.twitter.com/mULAG9iN4v

Stay updated on all the scenes from the Eagles parade with Philly Voice's live coverage here.