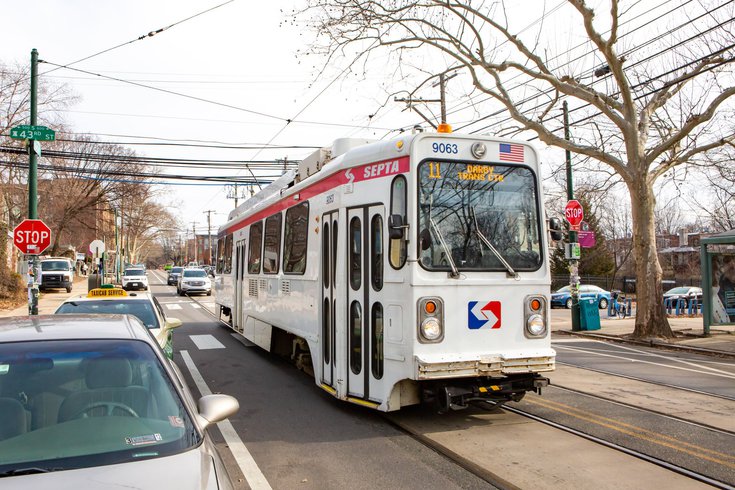 A SEPTA Route 11 trolley collided with a freight train at 8:30 a.m. Thursday, Dec. 9, 2021, in Darby, Delaware County, injuring at least seven people, including the trolley operator. The file photo above shows one of SEPTA's Route 11 trolleys.

Seven people were injured when a SEPTA Route 11 trolley collided with a CSX freight train near the intersection of Sixth and Main Streets in Darby, Delaware County.

The cause of the crash, which happened at around 8:30 a.m. on Thursday, is still under investigation by SEPTA and local law enforcement officials.

Of the seven people injured, six were passengers and one was the trolley operator. Andrew Busch, a spokesperson for SEPTA, said no injuries have been reported among the CSX personnel.

Delaware County Emergency Services Director Tim Boyce told KYW that one of the injuries is described as critical.

A total of 20 passengers were on the trolley, which was headed eastbound into Center City during the morning commute.

While the crash investigation continues, SEPTA is using shuttle buses to transport passengers in both directions around the Darby Loop and Island and Woodland avenues, but travelers should expect delays.

Busch said that in addition to speaking with the trolley operator and passengers, SEPTA will also meet with CSX to discuss the situation and assess video surveillance footage of the collision.

MORE: Freight train is moving after collision with @SEPTA trolley in Darby. More on @FOX29philly pic.twitter.com/eD3Ffg3bqn

We now know that three passengers and the trolley operator were hurt when a SEPTA Route 11 trolley collided with a freight train in Delaware County Thursday morning. https://t.co/TCifO5Cudu

Seven people are injured, with one of them in critical condition, after an accident involving a SEPTA trolley and a CSX train in Darby, according to SEPTA and Delaware County officials https://t.co/Y6Hu5Lmyae @CBSPhilly pic.twitter.com/X5Ukz51rM8

This story may be updated as more information becomes available.