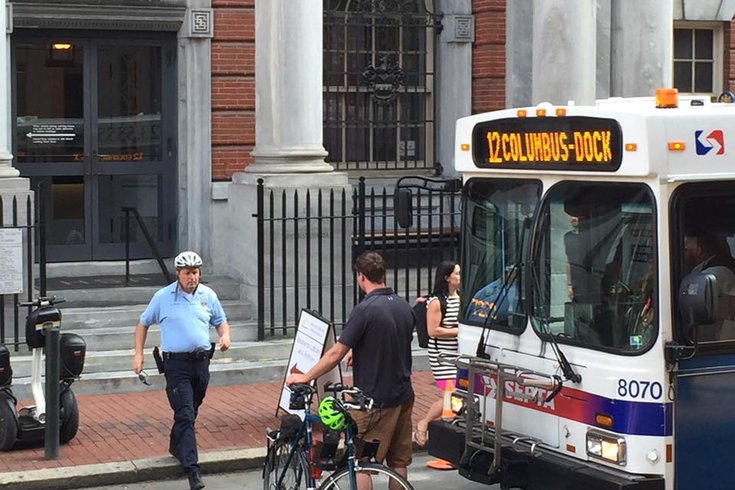 A bicyclist and a SEPTA bus driver had a standoff Wednesday and a police officer responded. An observer said the man on the bike felt he was being followed too closely by the bus, so he stopped his bike and blocked its path on Locust Street at 13th Street.

The bus driver confronted and pinned in traffic for about an hour Wednesday at rush hour by an angry bike rider did nothing wrong, according to SEPTA officials.

A viewing of on-board surveillance videos provided by SEPTA to PhillyVoice seems to back up transit officials.

A confrontation, posted on Facebook with pictures, shows the unidentified bicyclist facing the bus at 13th and Locust streets in Center City.

In the Facebook posting by school teacher Matthew Kay, the bike is turned broadside to the bus.

The thus-far unidentified cyclist stands hands on hips, facing the 20-ton bus. On board the Route 12 bus were about 10 passengers and a driver. 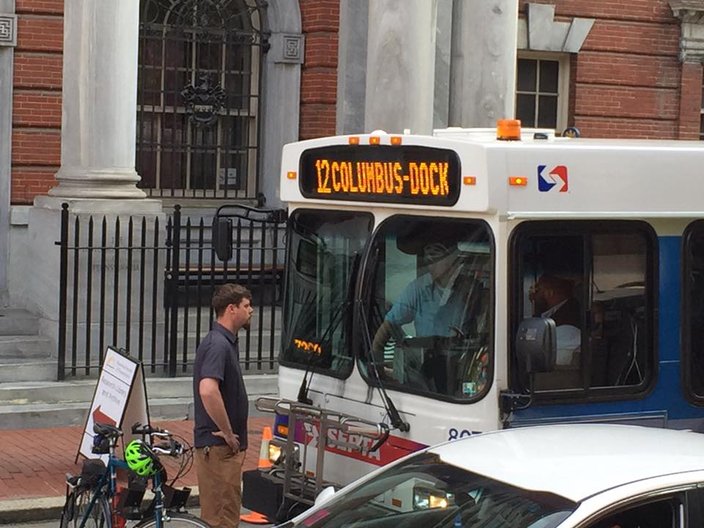 A bicyclist got into a confrontation Wednesday with a SEPTA bus driver at 13th and Locust streets. According to an observer, the man on the bike felt the driver was following too closely, so he stopped his bicycle and blocked the bus. A police officer on a Segway responded to the standoff.

Kay, who was eating at a street-side table in front of Nomad Pizza, did not see how the confrontation began, looking up only after the biker shouted, “Hey, I'm a vehicle, too!"

Kay said the cyclist, who blocked the bus for about an hour, was angry, claiming the bus had been too close to him.

But three video views shot from the bus indicate otherwise.

SEPTA showed video of the start of the incident to a PhillyVoice reporter Friday afternoon, but declined to immediately release the video or allow images to be made from the video.

When the cyclist is first seen, he is seen unhitching his bike from a metal post on the sidewalk on Locust heading east.

Both the bike and the bus waited for a red light, then headed east on Locust on the green light.

But a white service van, its flashers on, blocked the right lane, which is meant for buses and bicycles in lieu of a dedicated bike lane on Locust.

Immediately east of the stopped van, orange construction cones were placed in the street, as workers repaired cement on the sidewalk fronting the Pennsylvania Historical Society.

Approaching the stationary van, the bus driver moved into the left passing lane, going around the van and the bike in the right lane.

At that point, the cyclist stood and pedaled furiously alongside the bus, zipping through the section of the street set off by cones.

The bus driver moved smoothly back into the right lane, which is when the bike rider quickly pulled in front of the bus, turned his bike facing the bus, gestured and shouted.

There is no audio, but it is clear the cyclist is shouting. Then he turned his bike broadside to the bus.

A SEPTA video supervisor said he believes the bus was between three and four feet to the left of the rider at all times when they were side-by-side.

The bus driver then attempted to back up a few feet and go around the bicyclist in lhe left passing lane, but the bicyclist moved his bike closer to the front bumper of the bus to block that move.

At that point, the cyclist pulled out a cell phone, apparently calling police. The video manager said there is a record of the bus driver also calling SEPTA’s control center at about the same time. It isn’t clear ff the control center alerted police.

The first part of the incident, when the bus was stopped initially, took perhaps 10 to 12 seconds.

The second pinning of the bus happened maybe eight to 10 seconds later, but that led to nearly an hour of sitting idly in Center City traffic.

Eventually a Philly police officer on a Segway arrived, boarding the bus, then talking to the cyclist.

In a short video clip, the officer is heard telling the biker, “Dude I just want to go home and see my kid. Move that bike.”

Showell-Lee said no citations were issued by the cop.

She added, however, that had SEPTA police arrived, there were at least charges that could have been made against the bicyclist.