The bike rider was upset about the bus driver allegedly riding too close, observer says 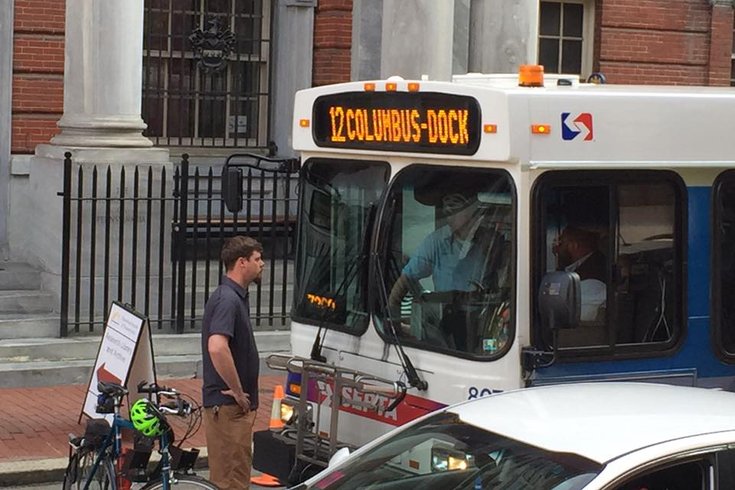 A bicyclist got into a confrontation Wednesday with a SEPTA bus driver at 13th and Locust streets. According to an observer, the man on the bike felt the driver was following too closely, so he stopped his bicycle and blocked the bus. A police officer on a Segway responded to the standoff.

A bicyclist and a SEPTA bus driver evidently got into a traffic-stopping confrontation Wednesday on Locust Street near 13th, in front of the Historical Society of Pennsylvania headquarters.

The man on the bike apparently felt the driver of the bus was following him too closely, according to a post on Facebook by Matthew Kay, a high school teacher in Philadelphia.

The man on the bike stopped, turned his bike broadside, and blocked the SEPTA Route 12 bus in the right-hand-lane of Locust Street.

According to Kay, who took pictures of the incident:

“So this man decided that this septa bus was tailgating him too close as he rode his bike. Proceeded to stand in front of a packed bus for over an hour like 13th and Locust was Tiananmen Square”

As well as his message, Kay’s post included two photos showing the standoff, with a Philadelphia police officer on a Segway intervening.

More on this story: What the surveillance video from the bus shows

Most of the commenters on Kay’s post took issue with the bicyclist, not with the bus driver.

In fact, one man, a self-described cyclist, wrote:

“As a 10 year plus city cyclist my experience has been that I feel the safest around SEPTA drivers. They are the only people driving who aren't on their phones and they're serious professionals who are super aware of who and what is around their vehicle.”

Kay said he was across the street, seated on the sidewalk in front of Nomad Pizza, at the start of their happy hour, when he heard  the bicyclist shout: "Hey, I'm a vehicle, too!"

He looked up to see the cyclist blocking the bus -- and a stream of traffic stuck behind it."

"I thought it would be over in a few minutes," but Kay said the standoff dragged on and on, for about an hour

"I'm not anti-bike, but this was just an incredible example of being self-centered," though he added he did not see what may have precipitated the standoff.

"To me, the bus driver was professional. There were confrontations, no middle fingers, no one shouting -- just this one guy. Everyone else took it in stride. It didn't escalate at all. Only this guy on the bike.

"The city reacted well," said Kay, adding the police officer spoke to both sides and then the standoff ended.

"It's just a slice of Philadelphia," said Kay. 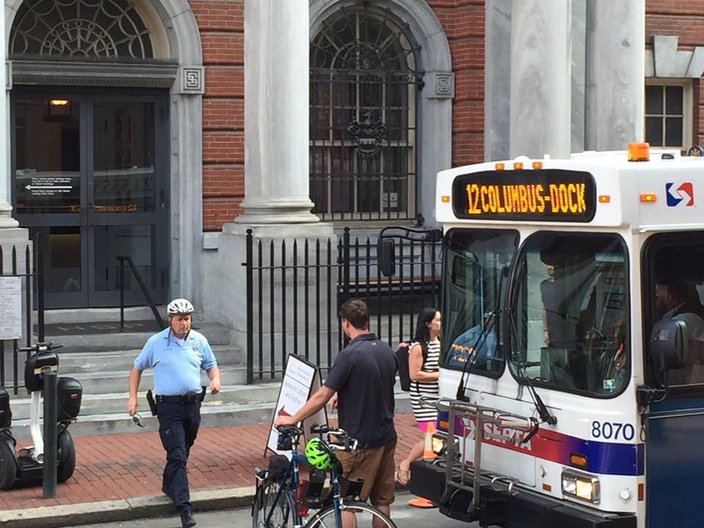 A bicyclist and a SEPTA bus driver had a standoff Wednesday and a police officer responded. An observer said the man on the bike felt he was being followed too closely by the bus, so he stopped his bike and blocked its path on Locust Street at 13th Street.

Edmund Feliciano, 35, a frequent Indego bike share rider – there is a bike dock station on 13th – shook his head at the picture Thursday morning.

“I don’t think that’s the way to deal with this, even if he felt he was being tail-gated. It’s inconsiderate for everyone on the bus,” Feliciano said.

“It’s the sort of thing that means getting your picture taken and you end up on the Internet,” he said.

A spokeswoman for SEPTA, who was sent copies of the photos and the Facebook post, said video of the incident will be reviewed to see what happened before the standoff and how the incident was handled.

Sarah Clark Stuart, executive director of the Bicycle Coalition of Greater Philadelphia, which is headquartered just a few blocks away at 15th and Walnut streets, rolled her eyes when shown Kay’s posting and pictures Thursday morning.

“I can’t respond to a Facebook posting,” she said.

She did, however, say that if the cyclist felt the bus driver was driving aggressively, then the incident should have been reported to police, rather than bringing traffic to a standstill.

A spokesman for the Philadelphia police department had no immediate information Thursday morning and so far has not had any further comment.