Shamrock Beef and Ale, Club Amnesia and Castaway's Pirate Bar are located adjacent to each other on Pacific Avenue 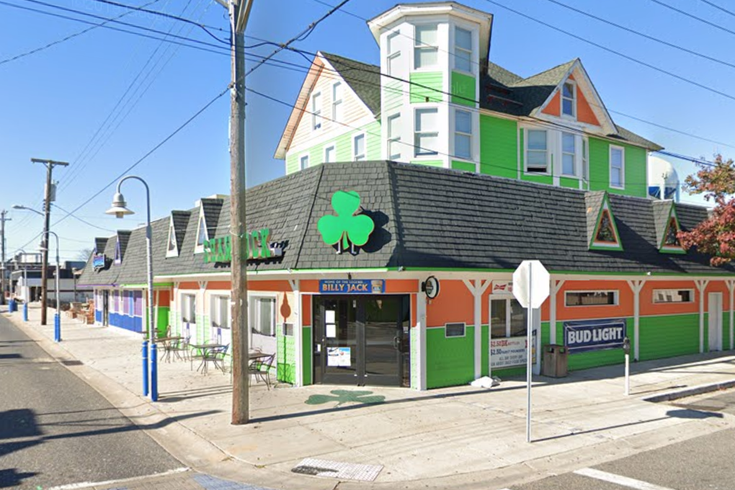 The three Wildwood bars on the 3700 block of Pacific Avenue – Shamrock Beef and Ale (shown above), Club Amnesia, and Castaway's Pirate Bar – had their liquor license suspended from May through September because of repeatedly violating COVID-19 restrictions on bars and restaurants in New Jersey.

A group of Jersey Shore bars that repeatedly breached the state's restrictions on eating and drinking establishments during the coronavirus pandemic will be prohibited from serving alcohol this summer due to their infractions.

The three adjacent Wildwood bars on the 3700 block of Pacific Avenue – Shamrock Beef and Ale, Club Amnesia, and Castaway's Pirate Bar – operate jointly under one liquor license, which is suspended from May through September as part of a settlement with the New Jersey Division of Alcoholic Beverage Control. The penalty was announced by the state Attorney General's Office on Monday.

The bars' violations include a lack of social distancing between patrons and employees and keeping the bar open past the state's former 10 p.m. curfew imposed on restaurants and bars. As COVID-19 cases spiked last November, New Jersey had required that restaurants to shut down indoor dining between 10 p.m. and 5 a.m. and to restrict bar seating.

ABC agents discovered some of the infractions on March 3 – two days after the bars had completed a 100-day loss of its liquor license for earlier COVID-19 violations.

Shamrock, Club Amnesia and Castaway's had been cited a dozen times for violating New Jersey's guidelines on indoor food and drink service during the COVID-19 pandemic since May, officials said..

"We’ve said it before and we’ll say it again, compliance with COVID-19 executive orders is a requirement, not an option," ABC Director James Graziano said. "Public safety is paramount to the ABC and we will continue to hold accountable any establishment whose failure to comply threatens the health of its patrons and the public at large."

The settlement also requires the liquor licensee, Tommy G's Shamrock, LLC, to get rid of its current management team.

"As the weather warms up, ABC will be keeping a close eye on clubs, bars and restaurants that attract summer crowds to make certain they’re doing their part to ensure patrons are enjoying themselves safely," Grewal said.

Shamrock Beef and Ale first opened in 1937 and is among the business in Wildwood that remained opened all year. On its website Shamrock says it will be closed until Oct. 1 and then reopen under new management. Club Amnesia shows the same date for its reopening, and Castaway's Pirate Bar, which is open seasonally, will not reopen until May 2022.