People used to view the predators as just another fish in the sea. But that changed in 1916, when 4 people were fatally attacked within a 2-week stretch 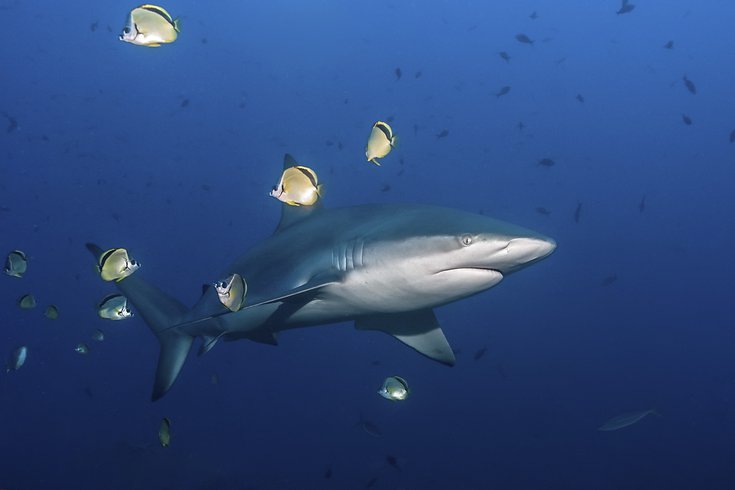 America's fear and fascination with sharks began in 1916, when a Philadelphia man was fatally attacked while vacationing at the Jersey Shore. Three more people in New Jersey were killed in the two weeks that followed.

In the summer of 1916, four people were killed by sharks along the New Jersey coast during a two-week span, sparking a national hysteria that changed the way Americans viewed the predators.

More than a century later, Americans remain fascinated, and often fearful, of the fish. That's a big reason why the Discovery Channel's Shark Week, which began Sunday, is the longest-running annual cable TV event of all time.

Before the 1916 attacks, most people viewed sharks as just another fish – if they even believed they existed. But the attacks shifted public opinion to the other extreme.

The shift was so culturally transformative that it was re-examined by many outlets, including PhillyVoice, on the 100th anniversary of the attacks. Now, many people overestimate the risk the animals pose.

There are more than 300 species of sharks, but only about 12 have ever been involved in an attack on people, the National Ocean Service says. Sharks only attack humans if they become confused or curious. They primarily feed on smaller fish and invertebrates, though some larger sharks eat seals and sea lions.

Last year, there were 73 unprovoked shark bites worldwide – on par with the 72 averaged between 2016 and 2020, according to the Florida Museum of Natural History, which tracks shark attacks. There were 11 fatalities, with nine of them unprovoked.

The 1916 attacks made sharks a symbol of danger in American popular culture.

The first person killed was Charles Vansant, a 28-year-old Philadelphia man who was on vacation with his family in Beach Haven, Ocean County.

He was swimming with his dog before dinner on July 1 when a shark mangled his legs. Vansant was rescued by a lifeguard and brought to the Engleside Hotel, where he bled to death.

Officials and fish experts downplayed this first attack. In a Philadelphia Public Ledger article, James Meehan – Pennsylvania's state fish commissioner and the former director of the Philadelphia Aquarium – minimized the threat sharks pose to humans and encouraged swimmers to get back in the water.

"The information in regard to the sharks is indefinite," he said.

"Vansant was in the surf playing with a dog and it may be that a small shark had drifted in at high water, and was marooned by the tide," Meehan said. "Being unable to move quickly and without food, he had come in to bite the dog and snapped at the man in passing."

But on July 6, a Swiss hotel worker named Charles Bruder was killed while swimming in Spring Lake, Monmouth County.

This second attack made the sharks prowling along the Jersey Shore front-page news nationwide. The bloodshed was shocking for both eyewitnesses and those who read about it in newspapers like the New York Times.

"As the life guards drew near (Bruder) the water about the man was suddenly tinged with red and he shrieked loudly," the paper reported. "A woman on shore cried that the man in the red canoe had upset, but others realized it was blood that colored the water and women fainted at the sight. As the life guards reached for the swimmer he cried out that a shark had bitten him and then fainted."

By July 8, armed guards in motorboats were patrolling much of the Jersey Shore. Many beaches were closed. Some towns constructed metal nets to keep people separated from the open ocean.

The New Jersey government and some municipalities put out bounties on the animals, which led to a shark hunt along the Jersey Shore. Hundreds were killed.

On July 12, three more people were attacked by a shark in Matawan Creek near Keyport, Monmouth County. The incident happened more than a mile from the open ocean. It's uncommon for sharks to swim that far inland.

Lester Stillwell, 11, was killed while swimming in the creek with his friends. Then, 24-year-old Watson Stanley Fisher was mortally wounded as more than 100 people watched him try to recover Stillwell's body.

Less than an hour later, Joseph Dunn, a 12-year-old from New York City, was attacked by a shark while he was swimming in a different part of the creek. He survived the attack because his brother and a friend rescued him from the shark.

In the short term, the attacks reduced the number of visitors down the shore. Some towns saw their number of sunbathers decline by as much as 75% and resort owners sustained losses that would be worth more than $5 million today.

In the wake of the attacks, scientists reassessed their assumptions about the dangers sharks posed. And the animals became a fixture in American cartoons as a symbol for danger.

In the second half of the 20th century, sharks became the centerpiece of many horror movies, most notably 1975's "Jaws." The 1916 attacks are mentioned in the film.

While there's still a great deal of fear surrounding sharks, in recent decades the dynamic has shifted some as scientists and conservationists have worked to reeducate the public about the fish.

This was Shark Week's main mission when the annual TV event debuted in 1988.