Adrian replaces the existing club-level, members-only spot, The Grille. It will be designed like an upscale tavern and serve American cuisine 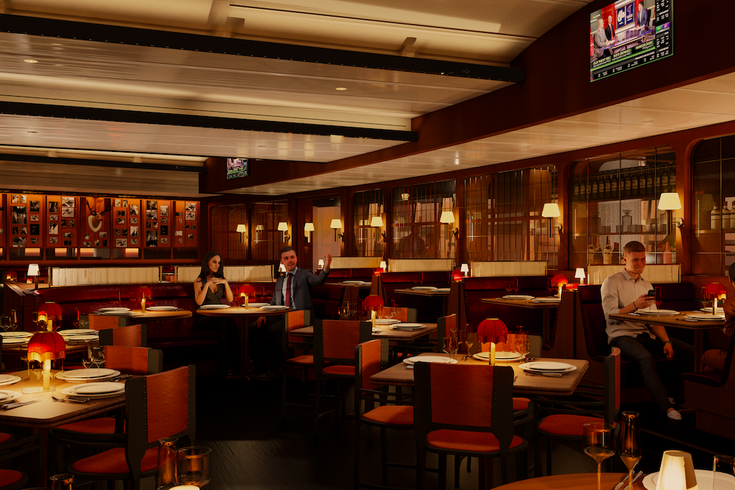 Stephen Starr's new restaurant Adrian will open at the Wells Fargo Center in the Fall. The restaurant is a collaboration between Starr Restaurants and Aramark. The image above is an artist's rendering of its interior.

The Stephen Starr and Aramark collaboration set to takeover the members-only restaurant in the club level of the Wells Fargo Center now has a name.

It has been dubbed Adrian, which inevitably conjures images of Philadelphia's favorite fictional boxer, beaten and bloody, calling out to his then-girlfriend at the end of "Rocky" (although officials have declined to comment if that is the inspiration).

Adrian will open this fall and replace the The Grille, which was open during Flyers and Sixers games to club-level ticket holders with memberships. It will seat approximately 300 people.

Aramark and Starr Restaurants and said Adrian will serve an American-style menu. Diners can start with soups, salads, and appetizers, like crab cakes and French onion soup. For the main course, there will be charred steaks, chops, sandwiches, burgers and a selection of sides. There also are extensive seafood and vegetarian options, including a raw bar, Scottish salmon, whole roasted celery root and whole branzino. The dessert menu features sweets, sundaes and cakes.

"(W)e are thrilled to see this exciting new restaurant come to life," Alison Birdwell, president and CEO of Aramark Sports + Entertainment, said. "Adrian is poised to deliver an elevated game-day dining experience, all in a unique atmosphere that pays homage to the city of Philadelphia and its iconic sports history."

Adrian's interior is being designed by the Rockwell Group and is described as an upscale tavern embracing the history of Philly sports teams, with traditional accents, lighting, and floor-to-ceiling windows overlooking the city skyline.

"An intimate interpretation of a classic urban tavern, Adrian offers a warm and inviting experience at Wells Fargo Center," said Matthew Winter, studio leader of Rockwell Group. "We conceived a palette of richly textured materials, such as dark walnut, brass, and silk in an approachable yet sumptuous environment adorned with red diamond-tufted Hollywood banquettes, wine-colored fringe table lamps, and other nuanced architectural gestures."

Adrian is part of the $350 million transformation of Wells Fargo Center that has been ongoing for a few years.  The installation of the arena's 4K kinetic scoreboard was part of the renovations, and $50 million is being spent to update the club-level sections, which includes new bars and the opening of Adrian.

"Every inch of the new Wells Fargo Center is designed to be world-class, and we're incredibly proud to be the first venue in the world to offer a Starr Restaurant experience to our guests," said Valerie Camillo, president of Wells Fargo Center. "As we've transformed the arena, we've focused on making every part of the venue top-of-the-line, but we've also made sure that every part of the new Wells Fargo Center represents the great city of Philadelphia and its incredible history. Adrian is a perfect example of that – it will be a world-class restaurant with an unmistakable Philly feel."

Details about Adrian arrive on the heels of the 76ers unveiling plans to pursue a brand new arena built with private funds in Center City. According to the "76 Market East" plan, the arena would be located on Market Street between 10th and 11th streets, on the site occupied by the Fashion District shopping center.