Citizens Bank Park is offering 'If Not Me, Then Who,' a blonde ale created by the Doylestown Brewing Co. and the Travis Manion Foundation 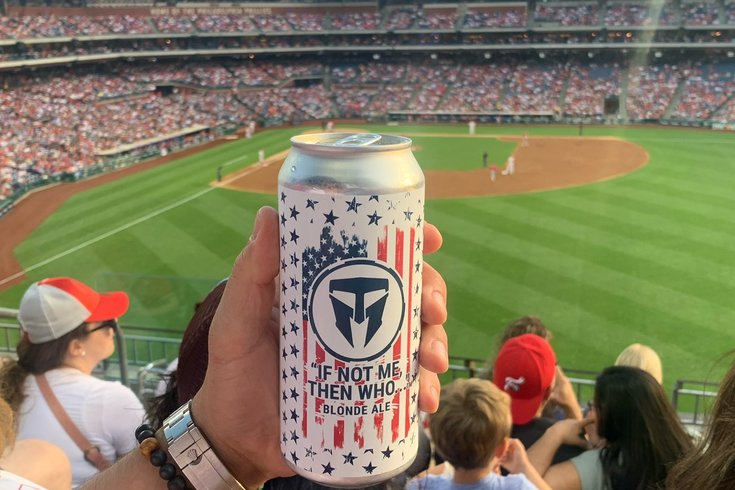 The "If Not Me, Then Who..." Blonde Ale, which honors Travis Manion, a Doylestown native killed while serving in Iraq, is now available at Citizens Bank Park. A percentage of sales supports the Travis Manion Foundation.

A craft beer honoring Travis Manion, a Marine killed while serving in Iraq, is now available at Citizens Bank Park.

People can buy 16 oz cans of the "If Not Me, Then Who ..." Blonde Ale during Phillies games and other events at the ballpark. The beer is a collaboration between the Doylestown Brewing Co. and the Travis Manion Foundation, one of the leading veteran service organizations in the country.

The beer also will be carried by select distributors and bars across the Greater Philadelphia region.

A percentage of proceeds from the craft beer sales will support TMF, which develops programs, training opportunities and events empowering veterans and military families of fallen soldiers to pass their values to future generations.

The foundation was created in honor of Manion, a Doylestown, Bucks County native and first lieutenant who was killed while saving wounded teammates in 2007.

The organization has maintained his legacy and the words he spoke before leaving for his final deployment: "If not me, then who?" This question inspired the name of the craft beer.

"If Not Me, Then Who..." was initially brewed in small batches in 2015 exclusively for TMF events, but positive reviews and many requests led to the foundation collaborating with Doylestown Brewing Co. to make the blonde ale available across the region.

"We are completely honored to be working with Travis Manion Foundation on this project and are proud to honor one of our hometown heroes," said Joe Modestine, founder of Doylestown Brewing Co. "I often think of Travis and wonder if he would have liked the beer. I would have wanted his approval and hope that we did him proud, the way he has for so many others."

With the Phillies returning to action for a long homestand after the All-Star break, it's the perfect time for fans to enjoy this beer honoring a local hero for a good cause.