A launch party for Shore Tea is being held at the brewery's tasting room in Rio Grande, New Jersey on July 23 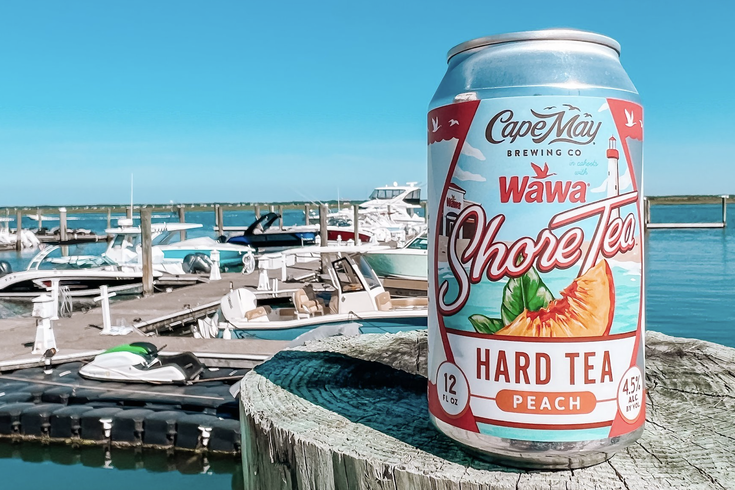 Wawa and Cape May Brewing Co. joined forces to create the new Shore Tea, a peach-flavored hard beverage that will be available at select stores beginning this week.

The company on Monday unveiled its new Shore Tea created in partnership with Cape May Brewing Co., calling the drink "lip-smackingly refreshing with just the right amount of sweet kick."

Shore Tea (kind of like Shortie — is this a pun?) will debut Thursday at the grand opening of Wawa's newest store in Langhorne, Bucks County, at 639 East Lincoln Highway. The store is the latest Wawa location in Pennsylvania to carry beer and other alcoholic beverages.

“We’re excited to stretch our wings and fly South to the New Jersey Shore to partner with Cape May Brewing Company to produce our first-ever hard tea with a customer favorite: Wawa’s Peach Iced Tea,” said Michael McLaughlin, Wawa's senior manager of concept development. “Wawa’s Peach Iced Tea captures the aroma and flavors of biting into a freshly picked peach at the height of ripeness, and pairs it perfectly with the warm carmelic tones of our Signature Black Iced Tea. Fragrant, juicy & sweet with just the right amount of acidity and a sweet tea finish.”

Cape May Brewing Co. has expanded rapidly in the region since it was founded in 2011. Director of brewing operations James Fox said Shore Tea was developed using a process similar to how the brewery has crafted its hard seltzers, which come in flavors including pineapple and mango.

"We kept it simple, just like if you were going to make tea at home. Fortunately, we were able to use the same ingredients that Wawa uses in their peach tea,” Fox said. “After the alcohol was added, we had several benchtop trials to dial in the ratios and flavors. We are really happy with how this turned out; it's easy to forget that it’s hard tea.”

In addition to the Langhorne store, Shore Tea will be available starting July 21 at the following Wawa stores:

A launch party with live music and giveaways will be held at the Cape May Brewing Co. Tasting Room (1250 Hornet Rd in Rio Grande, New Jersey) on Saturday, July 23 at 11 a.m.

Last year, Wawa extended its long-running collaboration with Delaware County's 2SP Brewing Co. to create the Sunfest Strawberry Lemonade Shandy. In the past, Wawa has teamed up with 2SP on a range of liquor products around the winter holidays. Cape May Brewing Co. joined forces last December with the Jersey Shore's famed Original Fudge Kitchen on a 50th anniversary Chocolate Fudge Stout beer.

“We were excited when Wawa reached out to us with the possibility of collaborating. We’re huge fans, and many of our crew members make Wawa a regular part of their routines,” said Ryan Krill, CEO & co-founder of Cape May Brewing Co. “We’re thrilled that we have the opportunity to continue to expand into the hard beverage space with an incredible partner to bring fans a product that they’ll love.”