The bakery has begun selling scoops of its new creation in more than 60 stores. Other locations will get them soon 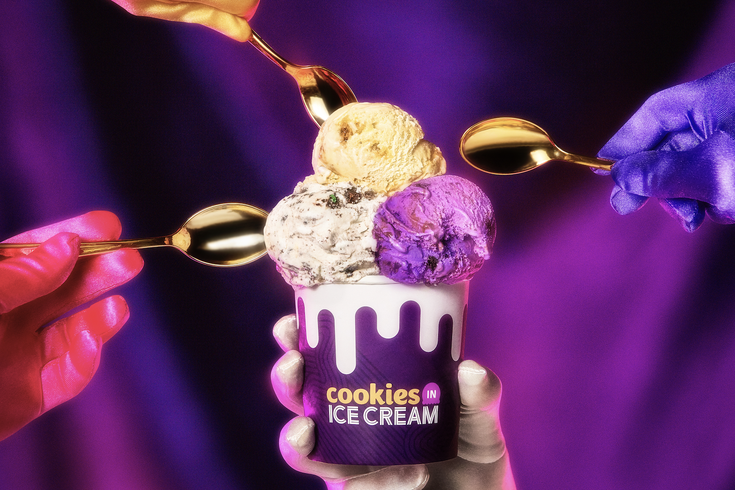 Insomnia Cookies, the late-night cookie and sweets company founded in Philadelphia, has released its own line of premium ice cream just in time for National Ice Cream Day on Sunday.

Though the company has sold ice cream by-the-scoop along with its original cookie creations, this marks the bakery's first venture into creating its own ice cream flavors. Insomnia Cookies began serving scoops of "Cookies IN Ice Cream" at more than 60 of their Mid-Atlantic locations Monday, but will offer the treats at the rest of their locations soon.

From Friday through Sunday, people can head to one of the Insomnia Cookies locations selling ice cream and receive a free scoop with an order in honor of National Ice Cream Day. The offer also is available to delivery orders.

While Insomnia will continue serving classic flavors, like traditional chocolate and vanilla, its full line of Cookies IN Ice Cream includes the Dreamweaver, which is made with Double Chocolate Chunk cookies in purple s'mores-flavored ice cream with milk fudge swirls and white stars.

Those living outside of those states (and in them, too) can take part in Insomnia Cookie's National Ice Cream Day celebrations with the bakery's Ice Cream AS Cookies menu, which takes other classic ice cream flavors and turns them into specialty cookies.

Insomnia Cookies was founded by Seth Berkowitz, a graduate of the Wharton School at the University of Pennsylvania. Though he initially wanted to go into investment banking, his on-campus hobby of baking and giving away cookies along Locust Walk in University City eventually became a full-fledged business.

In May, Berkowitz announced that Insomnia Cookies would move its headquarters to the former Super Walgreens location on Broad and Chestnut streets in Center City. The space will include a retail shop, test kitchen and offices. The new headquarters is set to open in 2023.