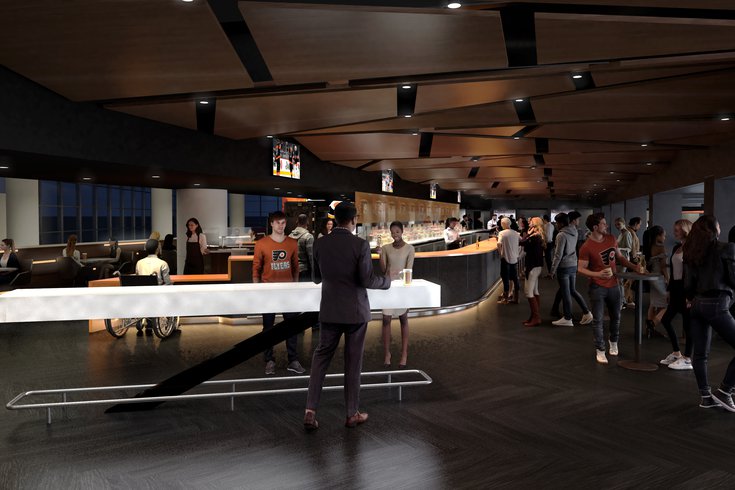 Render of the new Club Level during Flyers games at the Wells Fargo Center.

The club level of the Wells Fargo Center was torn almost completely down to its foundations as the sounds of drills, buzzsaws and jackhammers echoed through its halls on Tuesday.

Then a few holes were put in the wall for good measure, courtesy of Philly mascots Gritty, Franklin and Wingston.

The three were on hand to mark the official start of the arena's $50 million club level renovation — the next phase in a lengthy and total overhaul of the 23-year-old barn — but given how the Flyers', Sixers' and Wings' seasons all ended, there might have been some pent up frustration let out when each of the mascots picked up their sledgehammer.


Anyway, though it will remain open throughout the summer, by the time the Flyers' 2022-23 home opener rolls around — likely in mid-October — the Wells Fargo Center is expected to introduce fans to a new club level that exists on the cutting edge of technology all while honoring the city's rich sports tradition.

• A new club entrance and lobby on the Broad Street side of the arena.

• A redesigned 1,585-seat layout that will include 136 loge-style heated seats.

• Bars at the east and west ends of the arena that offer clear sight lines to the floor and theming that highlights the arena's changeover between events — the bar tops, for example, can project hardwood for the Sixers and then switch to ice for when the Flyers on. Both teams will even have their own specific cocktail offerings on nights when either plays.

• Hologram technology that is intended to have Flyers and Sixers players or visiting artists welcome you to the given day or night's event.

• Numerous new OLED, sidebar and LED displays throughout the floor.

• A tequila bar designed to honor the present and more recent past of Philadelphia sports and entertainment (i.e. when the Wells Fargo Center opened in '96 and on).

• And a whiskey bar, the Showplace Bar, built to honor the memories from the Spectrum.

"We're providing things that people in Philadelphia can say, 'That's cool! We have [something] one of a kind, that's spectacular!'" said Valerie Camillo, the president of the Wells Fargo Center since late 2018. "But we also recognize that there's something unique and different about Philadelphia sports, and we can't forget that."

It's a balance, one that Phil Laws is hoping will be struck with the people whose experience matters the most.

"A lot of it is just looking back at what are fans have liked historically and talking with them directly," the Wells Fargo Center's general manager said. "We do a lot of town hall meetings and a lot of face-to-face interviews with our fans to actually go to the source and say, 'Hey, what do you like? What do you remember about the Spectrum? What do you remember about this building that you've enjoyed over the years?' Taking that and trying to build it in and layer it into what is new technology, new experiences.

"We've never had a tequila bar or a whiskey bar in the arena, so that's not necessarily a notion of the past, but it's taking the past and the decorations and the things that will evoke that memory of the Spectrum and putting it into those brand new experiences." 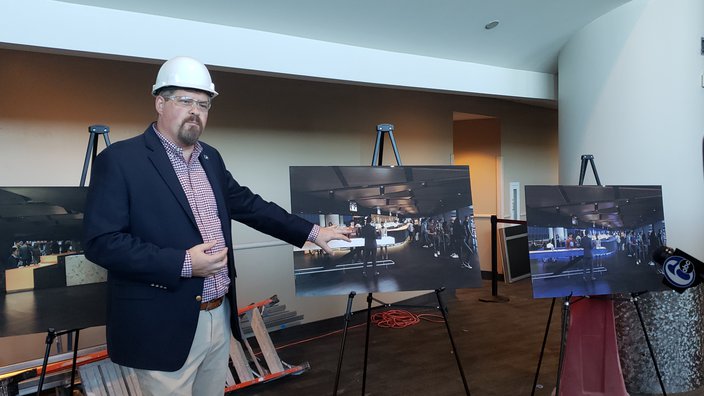 And what about that hologram idea?

"Well, is it a Princess Leia talking to R2-D2 hologram? No," Camillo said. "But it's pretty cool. It is something you can do where you pre-record it with players or perhaps concert performers. It can be a greeting, a welcome, a message of some kind. But it can also be livestreamed, so someone can be recording a message that goes directly to the portal, say from the locker room or somewhere else in the arena. That's the technology piece of it that we're most excited about is [what can we do with that]."

That one might have to be seen to be fully believed.

The club level renovation is a late phase in the full $300 million transformation project of the Wells Fargo Center, which is slated to be done next summer. The project, which began in 2016 and has been fully and privately funded by Comcast Spectacor ownership, has so far seen remodelings of the suites, overhauls of the concourse and mezzanine levels, the additions of the City Terrace all the way up top, the Center City Club all the way down below and the installation of maybe the wildest scoreboard in sports.

New lockers rooms and performer amenities for athletes and artists, along with upgrades to the outside of the building are still on the to-do list.

But for now, Laws, who's been on the project since its early planning stages in 2013, is happy to finally be working on the part of it that's been on hold for nearly two years.

The club level was initially supposed to get its facelift in the summer of 2020, but the coronavirus pandemic, as it did with everything, threw a massive wrench in the initial timeline.

"And like everyone else, to watch that be interrupted, have things in your life go away, things that you enjoy, things that you're working on, this is what that was for me," Laws said. "This project went away that summer, and to get back into it, it just has a special personal significance to me to be working on this level again after two full years.

"I think it's going to be spectacular. We're going to touch everything on this level and the moment will come when we'll be able to welcome fans back into the building. That'll be the real payoff for the work."