NBA Trade Rumors: Toronto's OG Anunoby is a popular trade target. Do Sixers have ammo to get him? 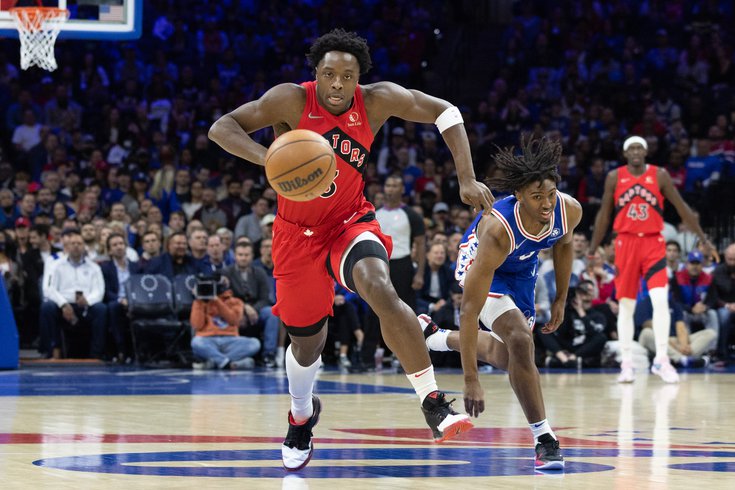 Is OG Anunoby a player worth targeting this offseason?

The Sixers and their fans will spend this summer looking at all possibilities to improve the team and bring the franchise closer to title contention. One of the first big rumors of the summer, though, illustrates where the Sixers might run into walls as they try to boost their ceiling and their floor as a group.

Toronto's OG Anunoby, a player Sixers fans should be plenty familiar with at this point, is one of the bigger names in the rumor mill early in the offseason, according to Jake Fischer over at Bleacher Report. Critically, though, this may be driven by outside forces rather than the word on the ground in Toronto:

Following a standout season from Rookie of the Year Scottie Barnes, word has circulated among rival front offices that Anunoby grew dissatisfied at times with his role in Toronto, where Barnes joined Pascal Siakam and Fred VanVleet as the primary ball-handlers in Nick Nurse's offense.

Two sources with knowledge of the dynamic told B/R that Anunoby has not directly expressed discontent with his situation with the Raptors. Perhaps the conversation around him has been driven more by external interest in acquiring the fifth-year forward's services.

Dating back to the trade deadline, sources said, the Raptors have postured with opposing teams that all of their "top six," including Anunoby, Barnes, Siakam, VanVleet, Gary Trent Jr. and Precious Achiuwa, are untouchable in trade conversation. But Toronto is also widely known to covet a starting center. The Raptors initially chased Jarrett Allen last summer. Then in February, Toronto flirted with Indiana about both Myles Turner and Domantas Sabonis and contacted San Antonio about Jakob Poeltl. Landing a center of that caliber would almost certainly require the Raptors to sacrifice one of those purportedly untouchable players.

That framing is key but doesn't necessarily make it more or less likely that the Raptors could entertain moving Anunoby. Raptors exec Masai Ujiri often operates pretty quietly, so if Toronto ends up exploring deals for the young wing, it's unlikely they're going to broadcast it to the entire league before doing it.

On paper, Anunoby is the exact sort of player the Sixers need more of as an organization. A big, switchable defender, Anunoby is capable of sliding across assignments and chasing different sorts of players around the floor, using his size to swallow up smaller players and his speed to bother bigger, slower forwards who struggle to get by him. He's a prototype forward in every sense of the term: long, sturdy, and athletic with the ability and desire to make above-the-rim plays on both ends of the floor.

Within the Toronto development program, Anunoby has also become a more consistent and dangerous threat on the offensive end, where he showed promise in his sophomore year in college before tearing his ACL. Anunoby's scoring has gone up every single year in the league as his role has grown over time, and a shot that was questionable coming into the league is now a fairly reliable weapon for Anunoby. A down year for him in 2021-22 (36.3 percent from deep on 6.6 attempts per game) would have been an unmitigated success within the context of this Sixers team. Anunoby has also become a fairly reliable secondary creator, though mostly for himself, with any playmaking still fitting in the "nice bonus" category rather than a reliable part of his game.

Critically, his two-way impact makes him an important piece in the context of today's league. If you didn't notice it watching the Sixers in Round 1 and 2, perhaps you've noticed in other playoff battles that one-way players are increasingly difficult to play in a playoff rotation. Miami's Duncan Robinson, for example, rode the pine for most of the Heat's run because he was too exploitable on defense. Philly's Matisse Thybulle, on the other hand, was such a floor-cramping presence that Doc Rivers minimized his role for the Sixers in these playoffs. Anunoby had a below-average series shooting the ball against Philly, but doesn't tend to suffer from the same downside as either of those players.

The problem for Philadelphia? That dynamic makes a player like Anunoby valuable, probably more valuable than they're able to match in trades without including pieces they don't want to let go.

Anunoby is on a good contract (he has three years left on a four-year, $72 million deal) on top of being a young and productive player, and the Raptors are well within their right to set a high bar if teams want to avoid the Raptors simply hanging up the phone. Philadelphia's best trade chip not named Joel Embiid — who isn't going anywhere — is Tyrese Maxey, a player the Sixers have made clear is just about untouchable. Short of a team offering an All-NBA type player in their prime for Maxey, the Sixers are encouraged enough by his development and current level of production to consider him a core piece of what they're building. Suffice it so say that Anunoby isn't that, even if he's very good.

Without Maxey to tantalize teams, the options dry up quickly. Thybulle is a player who might still have some value in the right situation, and perhaps even to the Raptors on paper, if they believe they can get his shot right. He fits their profile of endless wing athletes, certainly. But he's nowhere near Anunoby on a one-to-one basis, and his vaccination status makes him an especially murky fit. Foreign nationals who are unvaccinated for COVID-19 are currently unable to enter Canada, and while COVID-related rules could change at any time, Thybulle's current insistence on remaining unvaccinated clouds a Canadian future independent of his skill set. It only gets uglier further down the bench.

There continues to be plenty of outside speculation about Tobias Harris' future in Philadelphia, rumors persisting about the Sixers potentially moving him elsewhere in an effort to clear cap space for another star. It seems fair to say Harris has more value after his last few months of this season than he did early in the year, having shown he can be a useful two-way piece between the Embiid and Harden pillars. Still, his price point combined with his production likely doesn't push him into the plus-value territory it would take to get a 24-year-old ascending player like Anunoby. His presence would also require a multi-team framework or multiple players being moved on Toronto's end for salary purposes, further complicating things.

The Sixers are also not exactly brimming with draft assets as a result of multiple trades that have been made since Daryl Morey took over in the front office — it's expected they'll have their 2022 first-round pick to dangle in trades, but a lot of their future first-rounders are either owed to other teams or tied down as a result of the Stepien Rule that prohibits trading picks in consecutive drafts. And while the No. 23 pick in 2022 is a decent enough asset to offer in trades, it will also turn into a player within the next month. Once that theoretical and speculative asset turns into a player with strengths and weaknesses, fit concerns in certain roster situations, and other various hang-ups, value tends to come down.

The only thing that might potentially be used to drive Anunoby's price down is an issue that could dampen his value to the Sixers — his health. Staying on the floor has been the biggest hurdle for Anunoby in the league, the fifth-year wing last clearing the 50 games played mark in 2019-20. It hasn't been any single issue, with Anunoby missing time due to a calf problem, a fractured finger, and even an appendectomy that could hardly be blamed on his on-court durability. But the bottom line is that Anunoby is a question mark to stay in the lineup on a team that needs stability around their centerpiece.

I don't think the Sixers have to worry much about that problem, as it doesn't appear Anunoby is all that gettable, particularly in a deal with a team that is short on interesting stuff to ship out. But if they somehow could cobble together an offer, Anunoby checks a lot of the boxes of a player they need on the roster to help Embiid and Harden take a step forward together. Maybe they need to draft the next Anunoby instead.