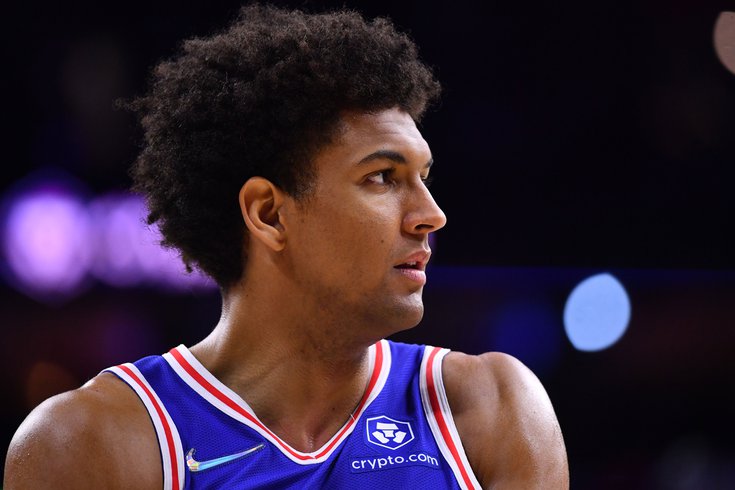 Matisse Thybulle fell out of favor with the Sixers' lastest second-round playoff exit, but he reportedly still has a fan out in Chicago.

According to Heavy.com's Sean Deveney, the Bulls have an interest in the 25-year old reserve wing, with that interest stemming from GM and former Sixers executive Marc Eversley.

"The Sixers could look to get off Thybulle’s contract to create some wiggle room under the luxury tax, which looms large over the team’s offseason, and one team with known interest, according to league sources, is Chicago. Bulls GM Marc Eversley has had a fondness for Thybulle going back to early in his collegiate career at Washington, and was instrumental in pushing the Sixers to acquire him in the 2019 draft.

"A deal would likely require a third team if Philadelphia’s goal is to save money under the tax, but the Bulls would be a strong suitor if Thybulle is available." [Heavy.com]

Taken with the 20th overall pick in the 2019 draft, when Eversley was the Sixers' vice president of player personnel, Thybulle became a fan favorite in Philadelphia for the smothering style of defense he played.

He worked hard, had an endearing personality, and quickly got invested in the community. It's a perfect combo for Philly.

But things started going south towards the end of this season. With a first-round matchup against Toronto Raptors locked in for the playoffs, it was discovered that he wouldn't be allowed to play in Canada. He hadn't completed his COVID vaccinations and decided he wasn't going to.

The Sixers missed that defensive presence once they hit the road for Toronto, and by the time they came back, Thybulle had fallen out of rhythm and became a liability on the offensive side of the ball.

They got past Toronto, but issues persisted in the second round against Miami, while Thybulle regularly checked in to a chorus of boos at home. The Sixers were sent packing in six games.

Thybulle has one year remaining on his rookie contract at a cap hit just shy of $4.4 million. The Sixers are planning to bring back James Harden and combined with rumors that they'll be on the hunt for another star, Thybulle may be one of the names the team will have to part with to save under the luxury tax, as Deveney wrote.

The Bulls, meanwhile, look to be trending up. They finished the regular season 46-36 and made their first playoff appearance in five years as a No. 6 seed.