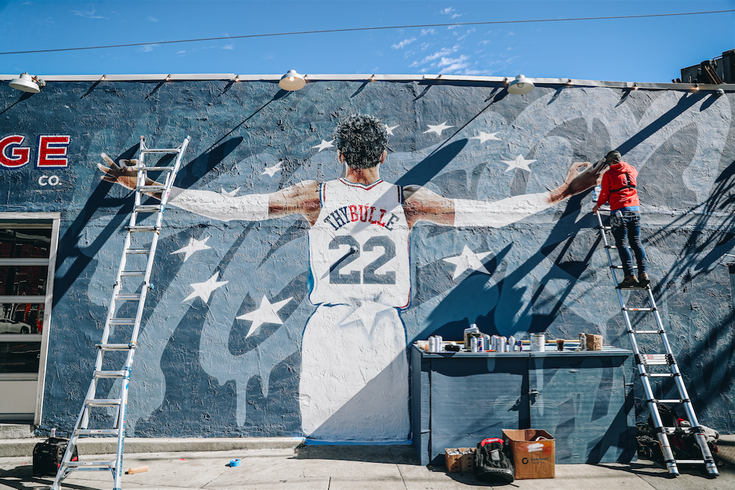 Philadelphia artist Gloss Black spray-painted a mural of Matisse Thybulle on the side of Fishtown bar Garage, located at 100 East Girard Avenue.

Philadelphia 76ers forward Matisse Thybulle is only in his second NBA season and he's already one of the league's most pesky defensive specialists. He just turned 24 years old on Thursday and will celebrate the occasion by getting to work on an initiative to support Philadelphia parks.

An instant fan favorite in Philly, Thybulle has a new mural up spray-painted on the side of Fishtown bar Garage, a project enabled by a partnership between Red Bull, the Sixers and Philly artist Gloss Black.

"They asked us if we'd be willing to put it on the side of our building and it's been great," said Garage general manager Jason Burke. "It's really visible, so people have been stopping their cars and coming out to take pictures. We got to meet Matisse and he's a super humble, nice guy."

Through the new partnership between Red Bull and Sixers, every steal Thybulle records this season will result in a $250 donation that will go to Philadelphia Parks and Recreation to refurbish local basketball courts.

The initiative is retroactive, meaning that Thybulle's 46 steals heading into the NBA All-Star break have already secured $11,500 in donations.

"It's awesome to be part of a project where Red Bull and the 76ers give back to the community," said Gloss Black, whose previous work includes the bubbly Manayunk watermelon text installed last summer on Main Street and another Sixers mural that went up in Fishtown during the NBA playoffs in 2018. "I started painting murals in Fishtown years ago, and to now create one that celebrates Matisse and Philadelphia is something I'm really proud to be a part of."

Thybulle said he's thrilled to have a mural in Philadelphia.

"When they asked me if it was something I'd be interested in, it was just such an honor to be considered," Thybulle said. "To some degree it's a lot to live up to, but at the same time it's really cool to see that I've been able to come this far so quickly and have an image that people want to see and to be put on display like that. We worked on this a long time to try and find a design we were all happy with. To see an artist doing his thing and see how he created this with his hands and a spray bottle is really special."

Sixers teammate Joel Embiid, a 2021 frontrunner for MVP and Defensive Player of the Year, had high praise for Thybulle after a recent win over the Houston Rockets.

"When you got Matisse in the game, that's our best defense," Embiid said. "I think he has the potential to be the best defender in the league. Just the way he moves and the way he played on defense, and he's got great hands. He was all over the place, and I think he has a chance, especially when it comes to the All-NBA Defensive Team."

Thybulle will now have added motivation to create turnovers and help a younger generation of Philadelphians enjoy playing hoops.