Matisse Thybulle ruled out vs. Raptors; ineligible to play due to COVID regulations 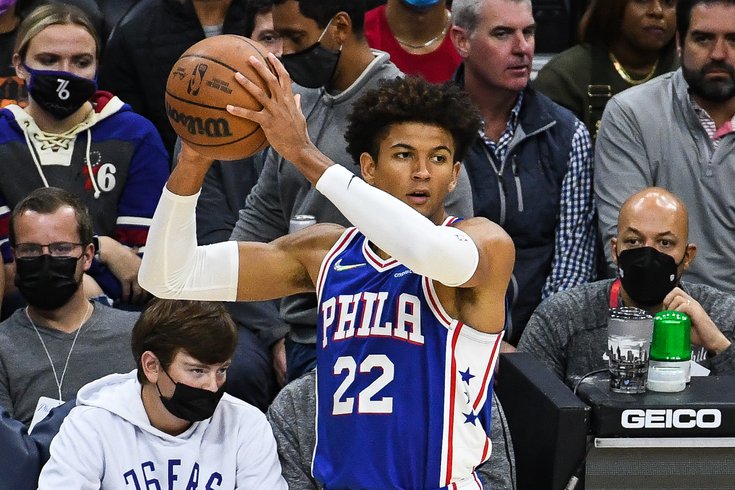 PHILADELPHIA, PA - OCTOBER 28: Matisse Thybulle #22 of the Philadelphia 76ers handles the ball during the game against the Detroit Pistons on October 28, 2021 at Wells Fargo Center in Philadelphia. (Photo by Kate Frese/PhillyVoice)

Matisse Thybulle is listed as "ineligible to play" for Philadelphia's road game against the Toronto Raptors on Thursday, heightening concerns that Thybulle might miss road playoff games in the first round should the Sixers draw Toronto as an opponent.

While the Sixers have traveled to Toronto for a game earlier in the season, the Canadian government requires people to be fully vaccinated to enter Canada as of January 15th. This possibility has been on the radar for the Sixers for at least the last month or so, as the odds of playing Toronto have risen with the Eastern Conference standings bunched up down the stretch. As of early Wednesday evening, the Sixers and Raptors are due to play each other in round one, with the Raptors a game ahead of the sixth-place Bulls in the Eastern Conference standings. A series of tiebreakers may end up determining the 2-4 spots in the East, as will the Sixers' performance in the three games left to close the regular season.

A league source told PhillyVoice that as of yet, there has been no indication that Thybulle's position has changed on receiving the vaccine. It is presently unknown whether the likelihood of this playoff scenario and any public blowback Thybulle might face — in addition to pressure from teammates in the locker room — will ultimately sway him to get vaccinated.

If Thybulle were to change his current course and decide to receive the vaccine, he would face a minimum of a two-week period before being eligible to play games in Toronto. The Canadian government considers someone fully vaccinated two weeks after the one-dose shot of the Johnson & Johnson vaccines, or two weeks clear of the second dose from the Pfizer or Moderna vaccines. Theoretically, if Thybulle were to receive the J&J vaccine on Thursday, April 7th, the soonest he could be eligible to play is Thursday, April 21st, which could mean he misses at least a road game in Toronto even if a sudden change in position is made.

It's inaccurate to call this a "development" given that this is something the team has been aware of and discussed at points over the last several months, but it does bring into focus some major issues for Philadelphia if Thybulle sticks to his current course. Were Thybulle to be ineligible for games in Canada during the playoffs, the Sixers would be short their only credible wing athlete against a team featuring an army of long, athletic players throughout the lineup, a la Pascal Siakam, Scottie Barnes, OG Anunoby, and others. Losing their best perimeter defender would be problematic in any playoff matchup, but especially so against a team that could overwhelm the Sixers with length and athleticism, punishing the Sixers for their roster construction issues.

Weirdly enough, this brings Philadelphia's management of the bench and the backup center position into further focus. Doc Rivers' preference for DeAndre Jordan has been a hotly-debated topic in the Sixers universe recently, namely because of Philadelphia's younger options at the position, Paul Reed and Charles Bassey. At present, the Sixers roster four separate players (Jordan, Reed, Bassey, and Paul Millsap) who are best deployed as backup centers to Joel Embiid. By allocating resources at that spot — and not using half of them to boot — the Sixers have pulled off the trifecta of spending a lot of resources on one marginal position, getting negative results from that position, and have prevented themselves from using the other roster spots to improve depth at other positions. Given that the team knew of this Thybulle possibility, the backup center fiasco is nothing short of a disaster.

Whether that ends up mattering will ultimately be decided in the coming days. Movement in the standings or a quick, if unexpected, reaction from Thybulle could render this discussion moot. But it's a disappointing note to end the season and a self-inflicted loss for at least one game that ultimately falls on Thybulle alone.

A Sixers team spokesman declined to comment when approached by PhillyVoice about this story.