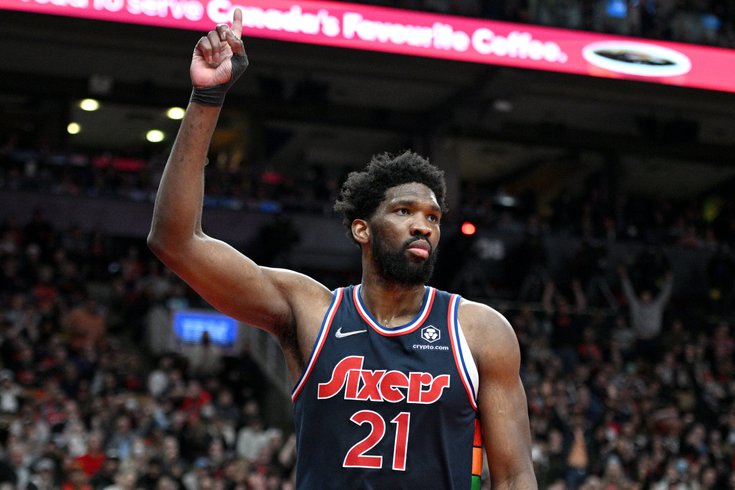 The Sixers have to go into their second-round series against the Heat without Joel Embiid.

Sixers center Joel Embiid underwent surgery to repair his right thumb on Monday, the team announced via text message, in addition to a separate procedure to repair an injury to his left index finger. The early prognosis is that Embiid will be ready to go when training camp begins in the fall, putting Embiid on track to hit the ground running when the 2022-23 season starts.

The hand issues were not the only complicating factor for Embiid during this year's playoff run, with an orbital fracture suffered at the tail end of the Raptors series forcing him to miss two games to open the second round. Initial indications suggested that surgery would not be required to deal with that issue, and that ended up being the case, which lined up with the last we heard from Embiid during exit interviews.

Embiid's pair of procedures do have a very real consequence in the immediate term — a basketball player will start his summer resting his hands, which you tend to need to do just about everything on a basketball floor, not to mention in the weight room. The offseason should never be undervalued when it comes to the individual growth and maturation process of players, particularly when you've seen Embiid emerge from the summer with new skills and an improved all-around game in each of the last two seasons.

(Broadly speaking, there have been advancements and adaptations in thumb surgeries in recent years, with — as one example — doctors adopting techniques used to repair and rehab ankle injuries on UCL injuries. Internal bracing has allowed for shorter recovery timelines and quicker return-to-play paths for athletes, though the good news for Embiid is that there's no real rush to get back on a floor anytime soon, camp not kicking off until mid-to-late September.)

Whether Embiid will return to the floor with a dramatically remade roster is the big question at this point, and his comments about their team construction have been the only guiding light we have on Philadelphia's plans heading into this summer. In the franchise player's mind, they need to toughen up to match teams like the Heat and Celtics, though Daryl Morey cautioned against overcorrecting for one specific problem and getting tunnel vision.

"When you have size and toughness, that goes a long way. You look at someone like PJ Tucker, great player, but it's not about him knocking down shots, it's about what he does, whether it's on the defensive end or rebounding the ball," Embiid said. "Defensively, plays with so much energy, believes that he can get from point A to point B, and he believes that no can beat him, and he's tough. He's just physical and he's tough, and they have a few of those guys." "Since I've been here, I'd be lying if I said we've had those type of guys. Nothing against what we have, it's just the truth. We never have PJ Tucker, that's really what I'm trying to say. I think physicality, once you get to the playoffs or the later rounds, you need that, you need those guys that are really tough."

"I often feel like if you go into the offseason with like, we need to fix X, you end up closing off potential opportunities and avenues," Morey added at exit interviews. "It's also the day after, so I just think I need to meet with Doc and his staff and our staff and just really get a full picture on what they're seeing before I get into something like that."

With another year being cut short due to injury, there will also be plenty of discussion this summer about what Philadelphia's plan behind Embiid is. Having Andre Drummond to absorb minutes and spot start turned out to be a boon for Philadelphia, and Doc Rivers' lack of trust in their younger options at center left Paul Reed and Charles Bassey in tough spots down the stretch, especially as the former won the backup job in the playoffs. There will be competing mindsets internally this summer — the head coach has shown favoritism for veteran options, but a competition between Reed and Bassey for the job may well be the best short and long-term option for the Sixers.

It's all pretty far off right now, so a "Get well soon, big guy" will suffice as an endpoint for now.