The $1.3 billion project could be complete by 2031, when the team's lease at the Wells Fargo Center ends 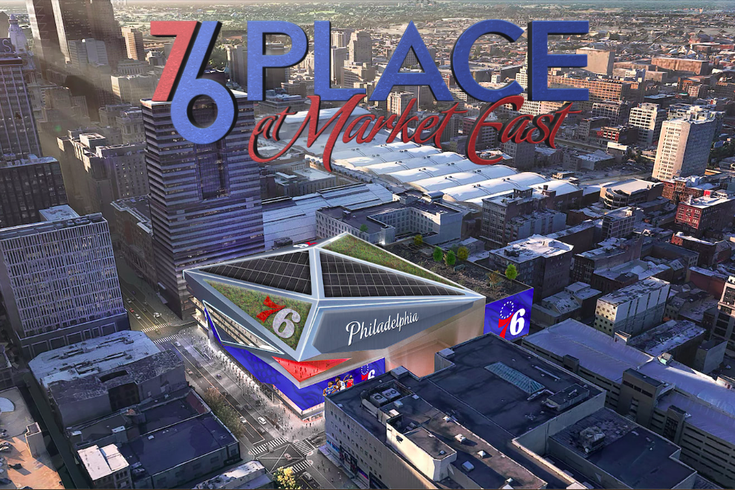 An artist's rendering depicts the proposed Sixers arena at 10th and Market streets in Center City. The team's lease at the Wells Fargo Center will end in 2031.

The Sixers' lease at the Wells Fargo Center will end in less than a decade and the team is looking to build a new home in the heart of Center City.

The team has proposed constructing a privately-funded arena at 10th and Market streets on the site currently occupied by the Fashion District shopping center.

Part of the mall would need to be torn down for the project, dubbed "76 Place Market East." The team said it would bring new jobs and investments to Center City in a release announcing the proposal Thursday morning.

"We're committed to building a world-class home in the heart of the city and creating a privately-funded arena that strengthens ties within the local community," said Josh Harris, the Sixers' managing partner.

The $1.3 billion arena would be complete in time for the start of the 2031-2032 season, which is when the Sixers' lease at the Wells Fargo Center ends. Demolition could begin as early as 2026 and construction could start in 2028.

The project is a joint venture between the Sixers, the mall's California-based operator Macerich and Philadelphia real estate magnate David Adelman, the owner of Campus Apartments.

Adelman would chair the project's development company, called 76Devcorp. He said the project was inspired by other downtown arenas, like New York City's Madison Square Garden.

One of the site's main appeals is its proximity to public transit. If the stadium is ultimately built there, it would sit on top of SEPTA's Jefferson Station and a Market-Frankford Line stop. It also would be two blocks from a stop on the PATCO line to New Jersey.

The Sixers don't intend to seek any money from the city, which is how most arena projects like this have been funded in recent decades. Still, the team would inherit the Fashion District's property tax reduction that would last through 2035, the Inquirer reported.

Mayor Jim Kenney released a statement pledging to work with the team to ensure the development of a new arena "maximizes benefit to the city and its residents in an equitable and sustainable manner."

"It was exciting to hear the proposal for Fashion District Philadelphia as we believe it is an ideal site for a world class sports and entertainment arena," Kenney said. "FDP offers our community a transit-rich location and an incredible opportunity to revitalize Center City, ensuring its vibrancy for generations to come."

I'm excited about the positive economic impact that a new arena would have on our city. I look forward to the @sixers' robust engagement process to ensure this is a win-win for the communities closest to the site, 76ers fans, and the city as a whole. https://t.co/6O9yJmuN57

The new arena would have 18,000 seats, which is slightly smaller than the Wells Fargo Center's capacity of about 20,000. The team has been scouting sites for a new arena for years.

Earlier this month, some Philadelphians received a survey asking for their thoughts on three potential locations – the Fashion District, the Navy Yard and Camden.

The Sixers planned to purchase a site for a new stadium in Penn's Landing in 2020, but they were outbid.

Comcast-Spectacor, which owns the Wells-Fargo Center and the Flyers, released a statement saying it has had a "terrific partnership" with the Sixers and looks forward to hosting the team until at least 2031.

"We've invested hundreds of millions alongside the city, Phillies and Eagles to make the South Philadelphia Stadium District an incredible destination for sports, entertainment and our passionate fans. We think it rivals any in the nation and will continue to draw the best events – the 2026 FIFA World Cup is a perfect example."

The Fashion District opened in 2019. It replaced the Gallery, an older mall constructed in 1977 that was more walled off from the rest of Center City. The Pennsylvania Real Estate Investment Trust bought the mall in 2003.

The pandemic severely diminished foot traffic at the mall and in December 2020 PREIT ceded control of the mall to Macerich as part of a restructuring plan.

The new stadium could face backlash from Chinatown residents, as the community has been wary of large-scale development projects since the Vine Street Expressway was cut through the neighborhood in the 1980s.

In the 1990s, the Phillies tried to build a new stadium near 12th and Market streets, but they were rebuffed by community groups in Chinatown.