Should you avoid or embrace talking politics on your summer vacation?

Sportsradio 94WIP host Big Daddy Graham's regular column in the Sea Isle Times is exactly the type of lighthearted writing you'd expect to find in a seasonal Jersey Shore town publication; in the spring 2017 edition, for example, he reminisces about "The Gong Show" and raves abut how awesome this year's Polar Bear Plunge was.

But at the end of his most recent column was a small section simply labeled "Trump." Graham's surprisingly thought-provoking plea: no matter how you feel about the president, leave your politics at home before going down the Shore this summer.

"I come to this beautiful beach to get away from all that," Graham wrote. "But I'm worried about the beer and vodka mixing in with the politics in our garages and on our decks."

"Just put a sock in it till you get home." 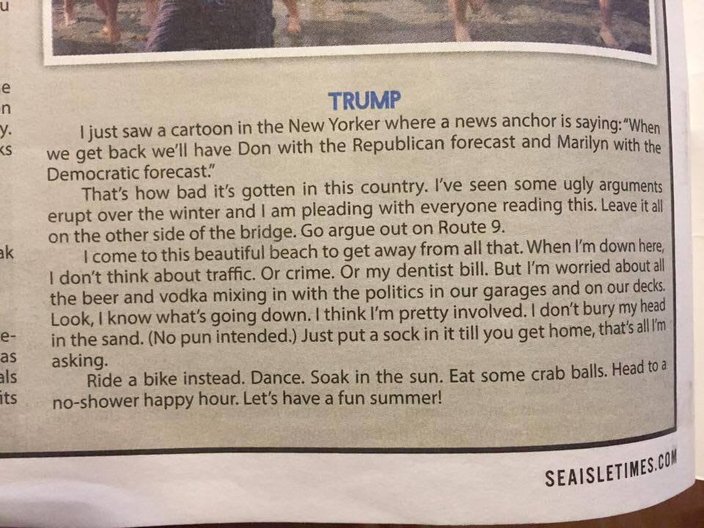 In this snippet from the spring 2017 edition of the Sea Isle Times, radio host Big Daddy Graham writes that you should steer clear of politics while at the beach this summer.

If you thought, after skirting around politics last summer during the election, that things would subside once the whole thing was over, you were pretty clearly wrong. The election of President Trump has seemingly deepened the partisan divide in our country, making political discourse even more volatile.


Whether its the Jersey Shore, a camping trip, travelling abroad or something else, it's hard to imagine you'll be able to completely avoid current affairs if you take a summer trip this year — especially if family or friends you haven't seen in a while are joining you.

There are legitimate arguments for both embracing and avoiding talking politics if you're fortunate enough to take a vacation this summer.

• Embrace: If you avoid discussing politics with the people you know, what chance do you have of discussing it with anyone else? A democracy is much better off when we try and talk to each other, no matter how divisive the issue, and sometimes vacations are the only time you'll be able to talk politics with certain friends and family. The more we avoid it, the bigger the divide becomes; vacation is an opportunity to fix that.

• Avoid: For the past two years, and certainly over the past five months, the unending, exhausting barrage of news about candidate and eventual President Trump can take a toll mentally. No matter where you go — work, school, the grocery store, the gym — you're almost bound to be reminded of our current political climate in some way. Can't you just enjoy a few days at the beach without worrying about getting into a potential screaming match about health care policy?

We want to hear from you. Are you going to try and avoid talking politics on your vacation this year, or embrace it?