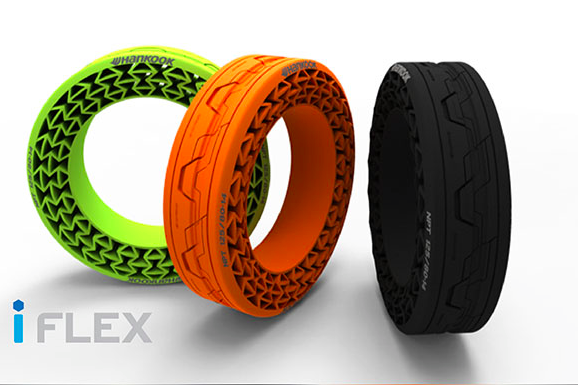 Hankook's iFlex tire, still in the testing phase, can't be punctured and is manufactured using an eco-friendly process.

There's nothing worse than the sinking feeling that comes with the orange glow of a tire light on your dashboard, followed by five tense minutes of deciding whether your car is listing or it's just your imagination.

But if South Korea's Hankook Tires has anything to say about it, this problem could soon be a thing of the past.

After conducting a series of high-speed tests, the company's non-pneumatic iFlex tire is another step closer to production reality, according to a report from Gizmag.

In testing, the iFlex was put through its paces in five different categories: durability, hardness, stability, slalom and speed. The electric car Hankook used hit 130 km/h (81 mph) without damaging the tire, and the iFlex was able to match the performance of a conventional pneumatic tire in all the other tests – although further details about the results have not been revealed.

The iFlex is Hankook's fifth generation attempt at the airless tire, which the company says uses an eco-friendly uni-material with geometric shapes built in to ensure the same bounce and springiness provided by air pressure, Wired reports. The latest model is also designed to fit onto the traditional rims used by current vehicles.

Hankook has also developed a manufacturing process that increases energy efficiency by reducing the steps involved in the iFlex's production. Furthermore, the material of the tire enables it be recycled with greater ease.

The company has yet to provide a timeframe for the introduction of iFlex to the market, but Hankook hopes it will solidify its place as a global top-tier tiremaker focused on future-oriented products.